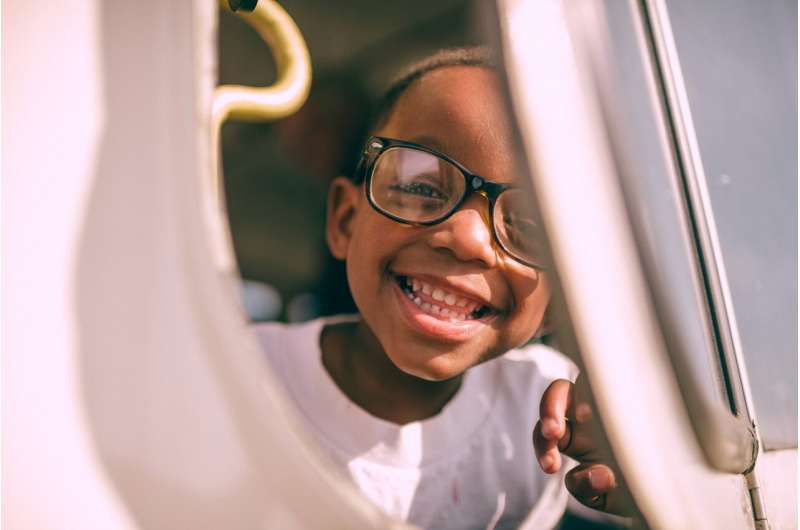 Children have a secret power that helps them avoid a “learning trap” that adults may sometimes fall into: Kids just can’t focus their attention.

A new study used eye-tracking technology to show that kids’ attention wandered all over a computer screen while they were trying to complete a task—even when adults quickly figured out they could do the task more efficiently by focusing on particular objects.

But that tendency to have a wandering eye helped four- and five-year-olds when the task unexpectedly changed—and they noticed important things on the screen that adults were not paying attention to.

“The ability of adults to focus their attention is usually very helpful in everyday life,” said Vladimir Sloutsky, co-author of the study and professor of psychology at The Ohio State University.

“But sometimes it helps to see the world more as a kid and to notice things that may not seem that important or relevant at the time.”

Sloutsky conducted the research with Nathaniel Blanco, a postdoctoral researcher, and Brandon Turner, professor, both in psychology at Ohio State. The study was published online recently in the Journal of Experimental Child Psychology.

The study involved 30 4- and 5-year-old children and 38 adults who participated in a lab, where they were fitted with eye trackers that could tell where they looked on a computer screen.

They were then shown colorful images of creatures that had seven identifiable features, including a head, tail and antennae.

Participants were told there were two types of creatures, called Flurps and Jalets, and that they had to figure out which ones were which.

One feature was always different on the two types of creatures—for example, the Jalets may have a blue tail and the Flurps an orange tail. In addition, the children and adults were told that most (but not all) of the Flurps had a certain type of feature, such as pink antennae.

One of the features was never mentioned in the instructions and it did not differ between the types of creatures. This was what the researchers called the “irrelevant feature.”

After training, participants were shown a series of images of the creatures on the computer screen and were told to indicate which type of creature each one was.

During the first part of the experiment, adults quickly learned which feature always determined whether the creature was a Flurp or Jalet, and the eye-tracker showed that they then concentrated nearly all of their attention on that feature.

Children were slower to learn which feature was most important in determining which creature was which—and the eye-tracker showed they continued to look at all the features of the two creatures, even the ones that were not relevant.

“The kids were not as efficient as adults at learning quickly,” Sloutsky said. “They kept looking around even when they didn’t need to.”

But halfway through the experiment, the researchers made an unannounced switch: The irrelevant feature—the body part that previously had no bearing on what type of creature it was—became the feature that would determine whether it was a Flurp or a Jalet. This feature, which had been the same for both creatures before the switch, was now different for each.

After the switch, the adults were more oblivious to the importance of the new feature than the children were. Instead, they were relying on the previously learned less-important features.

Children, on the other hand, had been paying attention to everything, so they noticed more swiftly that the rules had changed.

“The adults were suffering from learned inattention,” Sloutsky said. “They weren’t paying attention to features that weren’t important during the first part of the experiment, so they missed when those features did become important.”

Sloutsky said the brains of four- and five-year-olds aren’t mature enough to focus attention in the way adults do. That fact may help them learn more as they explore the world.

And adults certainly have the ability to distribute their attention broadly like the children did in this study—but they often choose selective attention because it is helpful in achieving efficiency, he said.

The lesson for adults, though, is to realize that selective attention, while increasing the efficiency of learning and performance, can also lead to a learning trap in some situations, Sloutsky said.