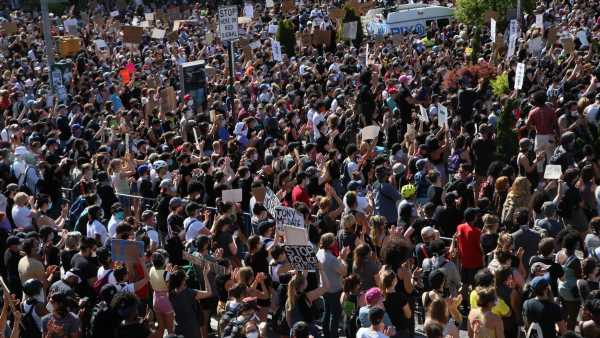 Around the country, hundreds of thousands of people are flooding the streets to protest police brutality and racism after the death of George Floyd, who died after now-former Minneapolis police officer Derek Chauvin held him down with a knee on his neck for more than 8 minutes.

But a pandemic is still raging. The new coronavirus SARS-CoV-2 hasn’t disappeared, and a crowded protest seems like a perfect recipe for spreading COVID-19. Is there a way to protest racism and police brutality without puttinging yourself or others at risk of infection?

Several experts said the nationwide protests could plausibly enhance the spread of COVID-19.

“It’s really the worst thing they can do from the pandemic standpoint, because people are coming from disparate areas, crowding together, screaming,” which can transmit the virus more easily, said Dr. John Swartzberg, a clinical professor emeritus in infectious diseases and vaccinology at the University of California at Berkeley School of Public Health. “And then they’re going back to their own communities.”

That said, protesting racism and injustice is important, and much of the risk of a protest can be reduced by staying 6 feet (1.8 meters) away from people and wearing a mask, Swartzberg said. From how to prepare for a march to post-protest due diligence, here’s what you need to know to stay safe(r) at a protest.

Prepare before you go

“Public health departments such as the NYC Department of Health have provided tips to reduce the risk of spreading COVID-19 during protests,” Elaine Nsoesie, a professor of global health at Boston University’s School of Public Health, told Live Science in an email. “It is important that protesters do the best they can to follow these tips.”

Before you go, pack a face mask, hand sanitizer, eye protection such as goggles or a face shield and plenty of water, said Krys Johnson, an epidemiologist at Temple University in Philadelphia.

And protest with buddies, Johnson said.

“Stay with that buddy group to reduce your contacts and to ensure some social distancing between you and other people (people tend to give groups a wider berth than they do for individual people),” Johnson told Live Science in an email.

If you are feeling sick at all, “the most important thing is don’t go,” said Dr. Georges Benjamin, the executive director of the American Public Health Association. “If you have any symptomatology at all, because of COVID, don’t go.”

Throughout the protest, maintain social distance and wear a mask, all the experts said.

“This goes for the police, too, by the way. Most of the police I’ve seen aren’t wearing masks either,” Swartzberg told Live Science.

Johnson and Swartzberg suggested people might carry signs, use noisemakers or take a knee, rather than yelling. Studies suggest that people singing and talking loudly emit more infectious respiratory droplets than people who are not doing those things.

Benjamin disagreed, saying that mask wearing should mitigate most of that risk.

“People need to express themselves however they feel most comfortable,” Benjamin told Live Science.

“People start wiping their eyes, and if their hands are contaminated they could infect themselves through their eyes,” Swartzberg said. Goggles are very important to reduce that risk, he said.

And tear gas can irritate the lower airways, he said.

“If you do get infected, you may not handle the virus as well,” Swartzberg said.

For instance, during wildfire season in California, people whose lower airways have been damaged are more likely to have severe cases of influenza, and the same may go for damage due to tear gas and COVID-19, he said.

People who are coughing may have been tear gassed, or may have COVID-19, but you have no way of knowing, so it’s best to steer clear of them, Benjamin said.

And being arrested or crammed into packed paddy wagons or a jail cell makes social distancing impossible. If that happens, “all bets are off,” Benjamin said.

Risk mitigation extends beyond the protest.

You should wash your hands and clothes as soon as you get home, Benjamin said.

“Stay hydrated, take care of yourself, check in with your group of buddies, and monitor your temperature so you can get tested and treated early if you do become ill,” Johnson said.

But let’s be real: People have been protesting for days. Maybe you already attended a protest and didn’t maintain 6 feet of physical distance or wear a mask throughout the event. What now?

“The testing protocol is not as well established, and we don’t know how well that would work compared to the quarantine,” Swartzberg said.

If you do fall ill, it could be more difficult to contain the spread using traditional methods, such as tracing your contacts and isolating them.

“From a contact-tracing standpoint, this would be a nightmare,” Swartzberg said. Without location-based tracing apps, it may be impossible to identify all of an infected person’s contacts at a protest or march, the experts said. That’s partly why Johnson recommends sticking with buddies to reduce unknown contacts.

Still, “timely testing and contact tracing can reduce spread,” Nsoesie said.  So it will help if state and local health departments make testing available for anyone who wants it, she said.

Protesters are often young and unlikely to have conditions that worsen COVID-19. But they may live with or love someone who does.

If they throw social distancing precautions to the wind, “they’re going to bring it back to parents and grandparents,” Swartzberg said. “People are protesting the taking of somebody’s life,” Swartzberg said. “But the irony is that they’re doing things that could cause someone else’s death.”

Ultimately, every expert said that protesting racism and police violence is too important to let the pandemic stop things.

Such protests “are the beginning of meaningful change for our country,” Johnson said.

“I don’t want to dissuade people from doing this,” Swartzberg said. “People have to ask, ‘Is there a way we can do this safely?’ The answer is ‘Yes you can, but it’s not the way you might like it.’ But we’re all doing things we don’t like right now.”