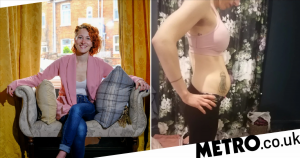 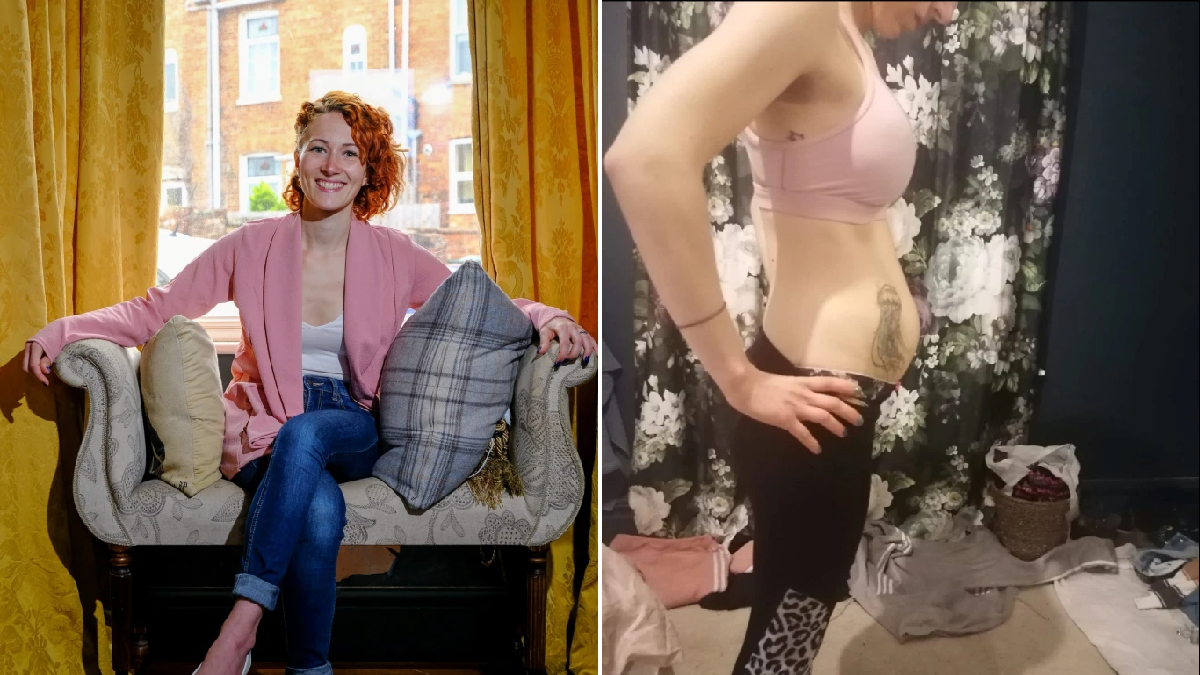 A woman who was told she would be in a wheelchair within a year can now run 5K and feels much better – after deciding to remove her breast implants.

Tamara Jones was diagnosed with multiple sclerosis (MS) in December 2020 when, a year after surgery to take her from an A to a DD cup, she started to feel unwell.

The digital designer from Oxfordshire experienced endless bladder and bowel problems, before losing all feeling in her left leg, eventually becoming unable to walk for long periods and even losing her eyesight.

With her MS diagnosis, Tamara was told that her symptoms would never reverse, and she began to mentally prepare for the fact that she would likely need to use a wheelchair soon.

But, after remembering something her personal trainer had mentioned years before, she began researching breast implant illness, and decided it might be worth having her implants removed, even if it only helped her symptoms a little bit.

Incredibly, the morning after having the implants removed in May 2021, Tamara says she regained feeling in her left leg, and in the following weeks the rest of her MS symptoms also felt a lot better.

Although she has not yet received an all-clear or misdiagnosis, Tamara says she is now able to run 5k – and she doesn’t need a wheelchair, as doctors predicted.

‘I dreamed of having a boob job my whole life – but it ended up almost taking my life away from me,’ says Tamara.

‘I still can’t get over how quickly the symptoms subsided after having my implants taken out, and neither can the doctors.

‘It feels too good to be true – but I can run and walk for miles, something I was told I would never be able to do again. I’ve lost my boobs but got my life back.’

A year after her breast implant surgery, Tamara realised she ‘wasn’t feeling herself’.

Things went from bad to worse, and she began to suffer extreme bloating, the constant need for the toilet, and huge anxiety surrounding leaving the house.

‘I thought I was going mad,’ Tamara says.

‘Doctors were telling me everything was normal, which made me think I was losing my mind, as I felt the furthest from “normal” I’d ever felt.

‘I paid privately to see a therapist in the hope that would help, but my symptoms persisted and got increasingly worse.’

After losing all feeling in her left leg, becoming shaky and losing her eyesight and speech, Tamara says she stopped going out.

‘I fell down the stairs three times – on the third time my husband wasn’t home and it was terrifying, what if the fall had been really bad?’ she says.

‘I knew something was very wrong, so persisted with doctors and pushed them to take another look at me.’

Doctors referred her to a neurologist where they did a brain and neck scan which highlighted a lesion on her spine – a common symptom for MS sufferers.

‘They said they could try to stop the symptoms getting worse, but that there was no reversing the state I was already in,’ she says.

She embarked on the strongest treatment possible for the condition, an intravenous infusion similar to chemotherapy, despite no change to her health after one gruelling round.

During her treatment, Tamara remembered something an old personal trainer had told her about breast implant illness – which can cause a wide range of symptoms following breast augmentation.

She decided it would be worth taking her implants out ‘just in case’.

‘Despite me wanting the implants for as long as I could remember, the thought that removing them might reduce my symptoms even slightly was worth it,’ she says.

She underwent an explant – the removal of the implants – in May 2021, with the same surgeon who had performed the original surgery.

The following day, Tamara walked into town with her husband Simon, and they realised something was different.

‘When we got home, we’d been walking for at least an hour-and-a-half, and Simon looked at me and asked if my legs hurt,’ she says.

‘I hadn’t even thought about my legs because of the pain my chest was in – but I could feel my left leg for the first time in four years and didn’t feel fatigued at all.

Two days after the surgery, Tamara saw her MS physio, who was able to discharge her, despite being enlisted to help prolong Tamara’s ability to walk unaided.

Just one month after the explant, she was able to run 5k – something she’d been unable to do for so long.

‘They told me MS was a condition that fought infection – and that the infection I was fighting off was my boobs.

‘I still haven’t been told the MS was a misdiagnosis, or that I’m in the all clear, but to see how far I’ve come since having my implants removed feels like a miracle.’

What is Breast Implant Illness?

According to the British Association of Aesthetic Plastic Surgeons, a small proportion of women who have breast implants ‘self-identify as having a number of symptoms they believe arise from the presence of their implants.’

Breast Implant Illness is not a medical diagnosis, but a term developed by those who have a variety of symptoms they feel are related to their breast implants.

Dr Alison Cave, Chief Safety Officer, MHRA, commented: ‘We recognise the concerns that some people have about symptoms they associate with their breast implants. We understand that these symptoms can be worrying for those that are experiencing them and that the symptoms can be referred to as Breast Implant Illness.

What to do if you’re worried about Breast Implant Illness

‘We strongly encourage anyone experiencing symptoms they believe to be associated with their breast implants to report these through our Yellow Card scheme. Anyone – patients, public, healthcare professionals can report safety concerns to us through this scheme,’ says Dr Cave.

‘We monitor all information received about breast implants, through our Yellow Card scheme as well as other data sources, such as published research. We also work with global regulators and relevant clinical experts to monitor these issues. This includes forming an independent expert advisory group; the Plastic, Reconstructive and Aesthetic Surgery Expert Advisory Group (PRASEAG) with members from relevant clinical bodies, who are reviewing risks associated with breast implants. We will take appropriate safety action where necessary.

‘If anyone with a breast implant notices any lumps, swellings or distortions in their breasts, neck or armpits or develops any health problems they feel may be related to their breast implants they should see their GP or implant surgeon in the first instance.’