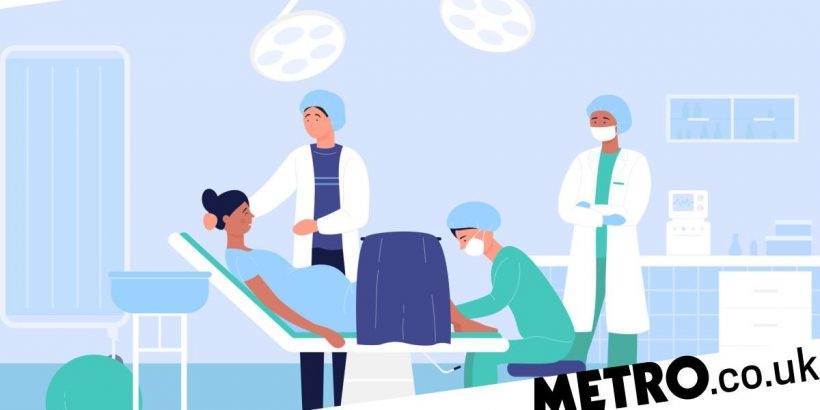 In a viral video that’s racked up nearly half a million views, TikTok user Helena claims that women lie on their backs to give birth because, she said: ‘King Henry got off looking directly at it. It’s not even the best position for labour.’

What the hell are you talking about?

Is this horrifying tidbit true? We looked into it further to see if we need to radically overhaul the way women give birth.

Firstly, there’s loads of evidence out there that lying on your back is indeed, not the best position for labour.

Issey Smith, a Brighton-based midwife, tells Metro.co.uk that the lithotomy position – lying on your back with your legs flexed 90 degrees at your hips – actually makes the diameter of the pelvic outlet smaller, whereas more upright positions allow the pelvis to expand and gravity to do its job.

this fact made me so uncomfortable like uuuuh #fyp

She goes on to explain that as a midwife, it’s mostly only in hospitals that she sees expectant mothers reclined on beds while giving birth.

The positions that would open the pelvic outlet would be all fours, kneeling, squatting, or leaning over a ball, but ‘if you put a person in a room with a flat bed in the centre, they will naturally go in and get on the bed,’ Issey says.

‘You see more upright positions at home, I don’t think I’ve ever been to a home birth where someone’s given birth on their back.

‘When you’re in a space that allows freedom of movement, people usually take the most natural positions.’

Jewellery designer Lucille Whiting gave birth to her first child lying down, and ended up having an epidural to relieve the pain during the 10 hour labour.

However while giving birth to her second child, she stood, delivering the baby in two hours.

She then stood for her third, fourth and fifth babies, which were delivered in 45 minutes, 40 minutes, and an incredible 35 minutes from beginning to end.

Lucille recalls that she felt ‘a lot more in control of what was happening’ after her first birth, and didn’t need any pain relief. For Lucille, this was a much more comfortable position.

So why does this horizontal position persist, despite it being common knowledge in the medical community that more vertical positions may make for an easier birth?

‘I think there are still many of us in midwifery who are Henry eighths and encourage people into positions which fight gravity so we can get a better look and see what’s happening a bit easier,’ she says.

Enter, the Kings of history. Hold that thought.

Since the beginning of time it seems, women would give birth in a vertical position. Ancient paintings have been found on the walls of caves or grottos depicting this, and in Greek and Roman mythology the goddess of childbirth and midwifery Elyithya was often shown in a kneeling position.

In the Middle Ages they came up with a very handy piece of kit – a decorative chair specially designed for childbirth. This nicely painted chair was often passed down the generations in wealthy families, whereas among poorer families there was often a communally shared chair, used when needed. These birthing chairs would have backrests of differing heights, and an open seat so that gravity could pull the baby downwards, into the waiting arms and blankets of a midwife.

But then, around the 16th and 17th century, male physicians started to deal with births rather than traditionally female midwives or family members. So that they could better see what was going on, and control the delivery, they encouraged women to lie on their backs. This also facilitated the use of forceps, if necessary.

When this was picked up by one of the big names of the day, the position really started to catch on.

According to researchers from the Kazimierz Wielki University in Bydgoszcz, Poland, King Louis XIV of France wished for his mistress Madame de Montespan to lie in the flat on her back, so that he could get a better view of the delivery.

Other sources claim that King King Louis XIV actually ‘enjoyed’ watching women giving birth, which is strange given that birth is universally recognised as one of the most painful experiences any person can ever go through.

Breaking the ban on men being in the delivery room was pretty out-there, as it had only recently become more acceptable for male obstetricians to be involved.

Before then, it was viewed as improper for any male to be present in the delivery room – because these were women’s issues – which may be why the King’s wishes were labelled as a creepy perversion.

But before we start patting King Louis XIV for being an involved and participatory birthing partner, it’s important to consider whether such direct involvement is even necessary.

Issey believes that while sometimes there is a medical justification for getting a better look, she thinks that ‘it largely comes from convenience of the caregiver, rather than what is optimal for the person who is birthing’.

After receiving feedback on her first video, Helena clarifies that it was in fact King Louis XIV, not King Henry – though with his less than stellar reputation for his treatment of women, it’s pretty easy to see how she got them confused.

We don’t know for sure whether King Louis XIV liked to get off on it, or just wanted to get a good look at what was going on, but this does seem like a classic case of male control and unnecessary influence.

Perhaps it’s time to ditch lying down as the go-to position and let gravity do some work.

Do you have a story to share? We want to hear from you.

Get in touch: [email protected].