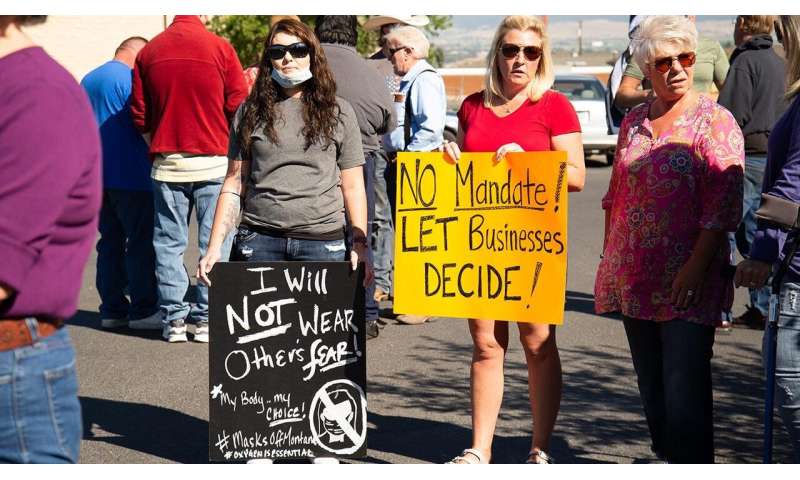 Even as the COVID-19 pandemic continues to grip the United States, face masks remain far from universal. The biggest explanation? Political partisanship.

A recent working paper from scholars at the University of Chicago Harris School of Public Policy studies the use of face masks—a cornerstone of the public health guidance to stem the spread of COVID-19—to show how partisanship has undermined America’s response to the collective risk of the pandemic.

The Centers for Disease Control and Prevention recommended masks as reliable preventive measures back in April, following the lead of many countries around the world. However, the issue is still a flashpoint of debate across the U.S. political divide, as opponents of face masks—often from the Republican Party—argue that they hamper individual freedom.

“During a time of major collective risks, like a global pandemic, a lack of initial consensus and uncertainty about the right thing to do allows politicians and their advocates to create competing politicized narratives that weaken public compliance,” said Austin Wright, an assistant professor at Harris. “In the current U.S. political landscape, very similar messaging from Republicans and Democrats alike would have been required to have ensured widespread mask usage.”

A political economist whose focus areas include conflict and crime, Wright co-authored the paper with Konstantin Sonin, the John Dewey Distinguished Service Professor at Harris; graduate student Maria Milosh; and scholars at Saint Louis University and the University of Michigan.

The paper documents four key findings: first, mask use is strongly defined by partisanship; second, local policy guidance and interventions are unable to offset that effect; third, partisanship is the most important predictor of local mask use, outweighing local policies and COVID-19 severity; and finally, President Donald Trump’s unexpected mask use, such as his July visit to Walter Reed Medical Center, almost immediately increased positive sentiment towards face masks.

Using machine learning to analyze voting patterns, they found that how counties voted in the 2016 election represented the most important factor in determining mask usage among residents. In areas with a large percentage Trump voters, mask use was significantly less common—a phenomenon that held true across states. The authors also found that local government mandates to wear the mask did little to offset the more powerful impact of partisanship.

Sonin, Wright and their co-authors studied the unexpected appearance of Trump wearing a face mask at Walter Reed. As the news spread on Twitter, they saw a substantial shift in the sentiments toward mask usage, reinforcing the role that partisan messaging has on public perception and on broad-based compliance.