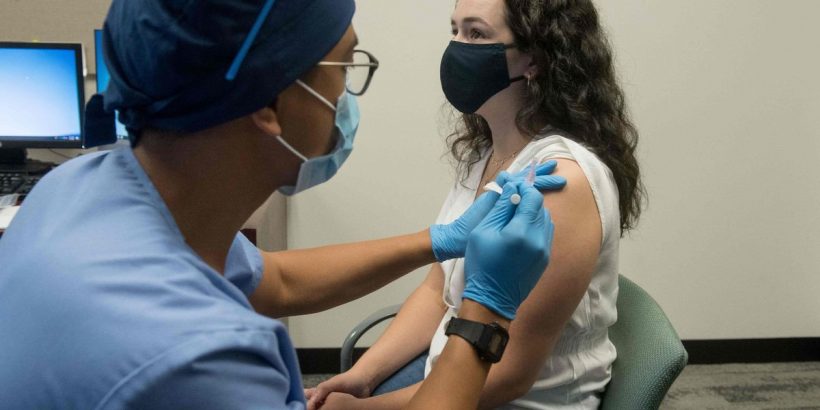 Brits will have been boosted by the news of a second vaccine breakthrough that could return us to normal.

Just a week after Pfizer released early results of their jab, Moderna has revealed its own research for an even more effective medicine.

Hot on the heels of the first preventative jab, the American biotech firm claims that its vaccine is a “stunning realisation”.

With the prospect of two vaccines very much on the horizon, many will be optimistic that there is light at the end of the tunnel.

What do we know about Moderna’s vaccine?

According to the company itself, the vaccine appears to be 94.5% effective in preventing disease among individuals.

And crucially, it appears to be safe.

The injection is given twice, 28 days apart, and uses technology known as mRNA which introduces the body to a messenger sequence that contains instructions for the body to generate an immune response using antigens.

Both Pfizer and Moderna plan to use the same technology.

However, both trials are still taking place and the final numbers could change.

Moderna's vaccine appears to be easier to store than the Pfizer jab as it remains stable at minus 20C for up to six months and can be kept in a standard fridge for up to a month.

Pfizer's vaccine needs ultra-cold storage at around minus 75C, but it can be kept in the fridge for five days.

How effective is the vaccine?

Moderna claims that its vaccine is 94.5% effective – compared to preliminary data from Pfizer which is 90% effective.

The results have been recorded among the firm’s ongoing phase-three trial.

The data also shows there were 11 cases of severe Covid in the trial, but none happened in people who were immunised.

A total of 30,000 people have been enrolled in the study, including the elderly, participants from diverse communities, and individuals with underlying health conditions.

It is still too early to say how long any immunity generated will last for – but it is still a good step forward.

Are there any side effects?

At this stage there doesn’t appear to be any significant negative side effects.

Independent analysis noted adverse reactions to the jab were considered mild or moderate in severity, and included fatigue, headache or a pain near the jab.

It may be worth remembering that nothing, not even paracetamol, is completely safe.

The UK Government quickly scrambled to buy 5 million of doses of the Moderna vaccine, to be available from Spring 2021 if all goes according to plan.

Moderna’s jab is very expensive, Sky reported, pitching it at £28 a dose.

That is compared to £15 per a pop for the Pfizer injection.

While this was in smaller quantities and deals will be done to cut the price for bulk purchases, Moderna – a commercial company – has an interest in making profits.

When will it be available?

The UK Government has shelled out for 5 million doses with the hope that it will be available from Spring 2021.

In the space of a week positive results have emerged for two vaccines, and a third Russian jab, boosting chances that the pandemic will be over.

Normality probably won’t be in place by Christmas, sadly, as the vaccines are still going through the final sign off processes.

But the data is good and suggests that there might be light at the end of the tunnel.

Some experts have claimed we will be back to normal by spring, others by winter 2021, and some say it will be even longer.

But the news of another effective vaccine is no doubt a big step in the right direction.