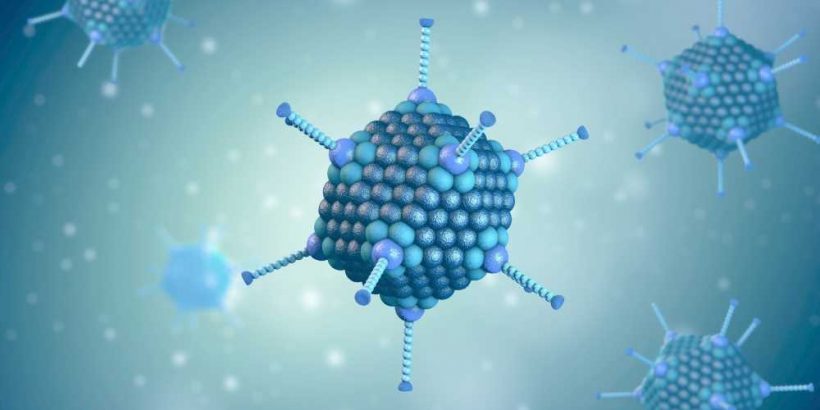 With advances in molecular biology informing recent developments in vaccinology, gene therapy, and other fields of medicine, human adenoviruses (HAdVs) have been of primary importance in medical research. A recent review in Trends in Molecular Medicine looks at the promises of HAdVs, their potential dangers, and future challenges.

HAdVs infect only humans, a pattern common to these highly species-specific viruses. All vertebrates are susceptible to these non-enveloped double-stranded DNA (dsDNA)-containing viruses.

HAdVs have seven capsid proteins, three major and four minor, and have been grouped into seven species, totaling 110. This classification is both genotypic and phenotypic. Different HAdVs infect different tissues, leading to variations in the clinical features of infection.

HAdVs have been used for medical research for approximately 70 years, with a wealth of data available on these tiny particles. This lends confidence to scientists who use these viruses as vectors for various applications, including vaccine delivery or gene therapy.

HAdVs were first isolated back in 1953 from healthy people's tonsillar and adenoid tissue. The following year they were found in military individuals suffering from acute respiratory disease, marking the first such pathogen isolated since the 1930s, when the flu virus came to light.

It was then discovered to have oncogenic potential in some species. It was used to create a new cell line for biomedical research but also sparked a long immunization campaign for US military personnel. Meant to control widely spreading respiratory illness, it succeeded remarkably well until 1996-1999, when it was ceased for non-medical reasons. Repeated fresh outbreaks led to the restarting of military vaccination in 2011.

In 1993 it came to be used for therapeutic CFTR gene delivery in cystic fibrosis, the first effective human gene to be used in vivo for human gene therapy. Its characterization also led to the important discovery of messenger ribonucleic acid (mRNA) splicing, which won the 1993 Nobel Prize.

In 1999, a gene therapy trial-related death occurred, putting the brakes on further research in this field. A C5 strain gave rise to the first approved oncolytic virus in 2005. Almost 200 trials are ongoing of adenovirus-based therapeutics and vaccines.

It was in 2020 that the first adenovirus vaccine gained approval, against the Ebola virus, for use in exceptional circumstances. Several more were developed the next year for use in the ongoing coronavirus disease 2019 (COVID-19) pandemic.

HAdV is non-seasonal and spreads rapidly within groups within closed or separate facilities, including barracks, hospitals, or even daycare centers. Most of these go unnoticed, but a few have gained attention because of the severity of the disease and some deaths among immunocompromised or frail individuals in the group. Some people without known disease and a normal immune system have also died from these infections, albeit rarely.

This has led to identifying some recombinants and new variants among HAdVs. This introduces genetic diversity, which could favor transmission or virulence by introducing new functional traits.

Novel endemic variants began to be identified, including HAdV-B14p1 in the early 2000s and B55 in 2006. The latter is a Trojan horse, incorporating a B11-neutralizing epitope and a pathogenic B14 backbone. It gained attention because of the unusually high frequency of pneumonia and acute respiratory distress among people with apparently good health, with higher-than-expected fatality rates as a result, compared to the parental B14 strain.

Similarly, the B55 variant arose from the recombination of B11 and B14 strains and shows increased pathogenicity.

Soon after, in 2013, the E4 strain was recognized to be of zoonotic interspecies origin. Recently, this strain was found to have acquired gain-of-function mutations adding a key replication motif, nuclear factor 1 (NF-1), absent in the parental E4 strain but required for efficient replication within human host cells.

This allows the new variant to replicate better and enhance transmission, explaining the global spread of E4 in recent times. Again, the E1B-19K gene deletion mutant could increase the inflammatory response to HAdV infection.

Other zoonotic HAdVs are also being reported, and some researchers suggest repeated human-animal interspecies leaps occur with several recombinations.

Overall, a growing emphasis has been placed on exploring the potential of nonhuman AdVs to cross species barriers and understanding their interactions with the human immune system.”

The go-to technology for HAdV typing is the polymerase chain reaction (PCR) nucleic acid amplification test (NAAT), which also helps to monitor emerging variants. However, current methods have their limitations, calling for next-generation sequencing and whole-genome sequencing (WGS), coupled with phylogenetic analysis, for epidemiological insights into outbreaks and infection control.

Meanwhile, some scientists have shown that the virus can leave infected cells following replication both by lytic and non-lytic methods, which could lead to quite different results clinically.

HAdVs are largely considered harmless infectious agents but can cause dangerous infections in those with immature or weakened immunity. This could include neonates or very old people, those suffering from chronic respiratory or cardiac illness, and those with weakened immunity due to various disease conditions or taking immunosuppressive medications.

Conversely, with weakened immunity, the infection may become serious, causing hepatitis or pneumonia, which may ultimately be fatal in a small proportion of cases. HAdV can also cause epidemic keratoconjunctivitis (EKC), most commonly due to the D8 variant. EKC is highly infectious and severe and may take months or years to resolve completely. In some cases, vision may be permanently impaired.

Eight of ten HAdV infections occur before the age of five years. Acute respiratory infections requiring hospitalization are commonly due to B3 and B7 strains, especially the latter, which replicate faster and cause a greater release of inflammatory cytokines and airway inflammation.

New HAdV outbreaks have been traced to variants with greater virulence, often arising from animal sources (zoonotic infections) or recombination of human and animal adenoviruses. This could lead to more severe diseases, for which the world is poorly equipped without antivirals or vaccines approved for clinical use or that are widely available.

For instance, pediatric hepatitis is suspected to be due to the coinfection of HAdV and adeno-associated virus (AAV), the latter being the actual pathogenic agent in this case.

Almost all humans are infected at least once by the time they complete their sixth year of life. These infections, especially with HAdV A and D, are mild or asymptomatic. Such infections comprise a tenth of childhood respiratory infections, mostly due to HAdV types 1-7.

The spread of the virus is respiratory, via droplets or surface contamination, including directly to the eye to cause keratoconjunctivitis; or by feco-oral transmission, including through food and water. The time to clinical disease varies between two days to two weeks.

The presence of cross-reactive T cells is important when developing AdV vectors that will resist inactivation by host immune defenses. Innate immunity memory, or trained immunity, mediated by broadly protective memory macrophages, is being suspected to prevent HAdV reinfection.

Even after clinical recovery, the virus may be shed from the gut and airways, for over 50 days, with immunocompromised people showing still more prolonged shedding. Children with HAdV pneumonia shed HAdV-B7 and -B3 for ~100 and ~50 days, respectively.

This differentiates HAdV from other respiratory viruses in children, such as the flu virus, which is shed for a mean of 18 days, and respiratory syncytial virus at only four days. It also highlights the need for more prolonged implementation of infection control measures in hospitals and the community during such outbreaks.

Dormant or subclinical infection is also known, especially in immunocompromised individuals, with disseminated viral disease in the adenotonsillar tissues, the gut, and other tissues. This may affect clinical outcomes such as chronic lung disease, heart disease, or even immunologic reactions like graft-versus-host disease (GVHD).

Despite their considerable toxicity, there are no specific antivirals for HAdV infection, with broad-spectrum drugs being used for whatever benefit they offer. For this reason, high-risk patients are routinely monitored for HAdV infection following stem cell transplants.

New therapeutic approaches include drug repurposing, the potential of T-cell therapy specific to this virus, and monoclonal antibodies.

While HAdV may be an innocuous pathogen to many, to some it may become a formidable predator.”

It is also a valuable partner for medical scientists.

As the scope and severity of HAdV disease become more apparent, global collaborative surveillance is necessary to detect and control outbreaks. The mechanism of disease and of transmission, the results in terms of the host response, and new preventive and treatment strategies, are areas of research that need to be addressed.