What is the best way to get your hit of Vitamin D? Researchers probe benefits of the ‘sunshine’ supplement as a weapon against Covid-19

Vitamin D is in the spotlight again — last month, following a flurry of promising studies, Health Secretary Matt Hancock announced he was asking government scientists to look at the impact of vitamin D on Covid-19 symptoms.

The emerging evidence is so hopeful that, according to reports last weekend, the Government plans to send supplies of the vitamin to care home residents and those shielding.

Meanwhile, scientists from Queen Mary University of London have begun a trial to investigate whether upping our intake of this nutrient could offer protection against coronavirus.

They plan to test 5,000 people’s vitamin D levels and see if supplementing those with low levels reduces the risk and/or severity of Covid-19 — and other respiratory infections — over the winter. 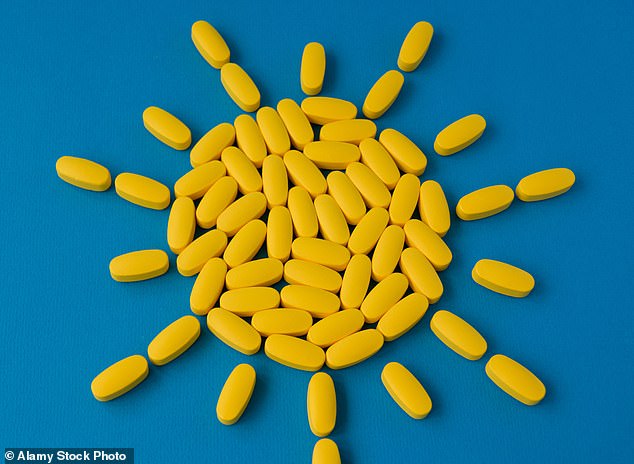 Vitamin D is in the spotlight again — last month, following a flurry of promising studies, Health Secretary Matt Hancock announced he was asking government scientists to look at the impact of vitamin D on Covid-19 symptoms

This comes as new evidence suggests that vitamin D supplements can boost the immune system, with a study published in The BMJ last month finding people who took vitamin D had fewer respiratory infections.

It is not simply infections: last week a study of 86 children with eczema found those who took a vitamin D supplement saw improvements in their skin after three months, reported the journal Pharmacology Research & Perspectives.

Vitamin D also helps regulate the amount of calcium and phosphate in our bodies; keeping bones, teeth and muscles healthy. However, around half of the UK population is deficient in it.

We make vitamin D via sun exposure on our skin, or we can get it from our diets from sources such as oily fish, egg yolks, or fortified foods including cereals.

However, it’s almost impossible to reach our recommended daily amount with these measures alone, not least because we don’t get enough sunshine in the UK — particularly in the winter months.

That’s why the Government already suggests we all take a 10mcg (or 400IU) supplement daily from October to March.

Some groups who don’t tend to get much sun exposure even in the summer, such as those in care homes, as well as some with darker skins who need more sun exposure to produce enough vitamin D, should take a supplement all year round.

We asked experts to assess a selection; we then rated them. 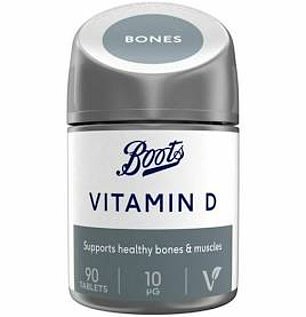 Expert verdict: This contains vitamin D3, ‘the type most easily absorbed by the body’, says Aidan Goggins, a pharmacist and author of The Health Delusion.

‘However, despite providing the guideline dose, this is too low for most UK adults. This 10 mcg figure is actually the minimum required to prevent bone problems such as rickets in children and osteomalacia in adults — caused by vitamin D deficiency.’

While the NHS recommends just 10 mcg, Aidan Goggins — like other experts — argues for higher doses. ‘Studies have consistently suggested a vitamin D level of at least double that — 20 mcg — is needed for good bone health and immunity.

‘A study from the University of Cork in 2016 concluded that in order for adults to maintain the optimum blood level during winter, a supplement of around 28 mcg (or 1,120IU) of vitamin D was needed.

‘It’s impossible to achieve this through diet alone — it would mean eating at least two portions of salmon or 16 eggs every day. So I’d recommend an oral supplement of 1,000IU to 2,000IU daily for most people.’

Claim: This sliced white bread with added wholegrain has been fortified with B vitamins and vitamin D. Two slices provide 1.5 mcg of vitamin D.

Expert verdict: ‘This bread is an easy and useful way to boost vitamin D levels,’ says Professor Kevin Shotliff, a consultant endocrinologist at Chelsea and Westminster Hospital in London and The Medical Chambers Kensington.

‘There are calls for the Government to fortify more foods with vitamin D, as many other countries do. Even sunny spots such as Australia and California do this routinely, and as such their diet is a major contributor to their overall intake.

‘The wholegrains will also provide fibre for good digestion and B vitamins to support a healthy nervous system.

‘But don’t rely on this solely for your vitamin D — if this was your only source of the vitamin, you would need 13 slices per day just to reach the minimum 10 mcg.

‘So I’d still recommend you take a 1,000IU supplement even if you eat this.’ 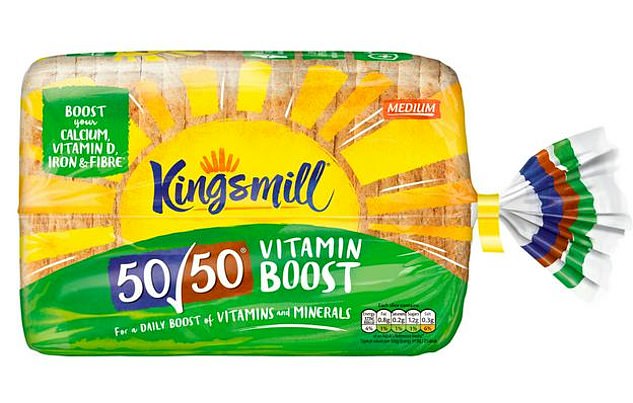 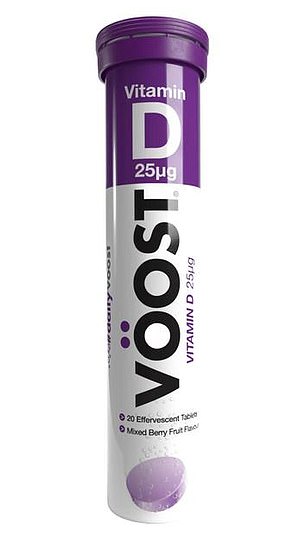 Claim: One tablet dissolves in water to create a berry-flavoured drink that provides 25 mcg of vitamin D, which the maker says can be absorbed faster than with tablets.

Expert verdict: ‘The dose of vitamin D here seems to be a good level, but I haven’t seen any robust evidence that vitamin D is better absorbed from a drink,’ says endocrinologist Professor Kevin Shotliff.

‘Also, these contain sodium carbonate — which makes them fizz and dissolve — and this is a type of salt, which can raise blood pressure. I couldn’t find on the packet exactly how much salt these contain per tablet, but some effervescent vitamins have been found to contain more than 1g per tablet [our daily limit of salt is 6g].

‘Anyone with high blood pressure or who has been advised to cut down on salt should avoid effervescent supplements. If you struggle to swallow tablets, try an oral spray.’ 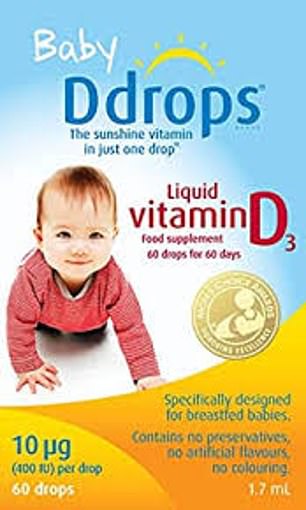 Expert verdict: ‘The NHS recommends breastfed babies from birth to one year should be given a 10 mcg daily supplement,’ says Bahee Van de Bor, a paediatric dietitian, who has worked at Great Ormond Street Hospital in London.

‘Bottle-fed babies don’t need extra vitamin D as formula milk is fortified with it. This product is easy to use and doesn’t contain sugar or sweeteners, just coconut oil, which can be useful, as taking vitamin D with a source of fat can promote its absorption (which is why it is recommended that we take a supplement with a meal).

‘It’s important babies don’t get more than the recommended dose, though, as it can lead to diarrhoea and lethargy. So take care with the dropper.’ 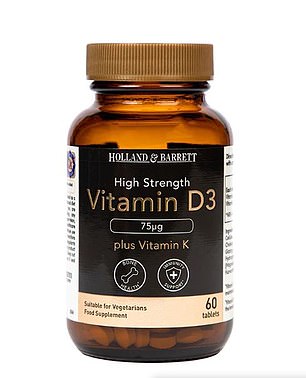 ‘We know vitamin K2 encourages the bones to absorb more calcium to help build new stronger, healthy tissue. But most healthy adults and children don’t need a daily vitamin K supplement because we don’t have a problem with deficiency: this nutrient is found in green, leafy veg, vegetable oils and grains, so most people get enough of it. 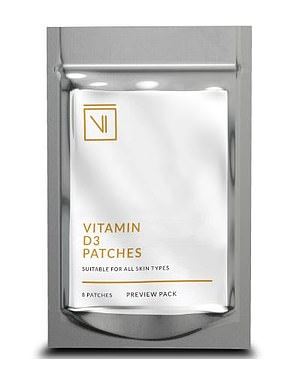 Claim: These circular patches each contain 1,250 mcg of vitamin D3 and deliver ’24 hours of continuous D3 supplementation, directly into the bloodstream’.

Expert verdict: ‘In theory, transdermal vitamins — i.e. absorption through the skin — mean they deliver into the bloodstream and bypass the digestive tract which oral supplements must go through,’ says endocrinologist Professor Kevin Shotliff.

‘They are an interesting area of research and if proven effective, could be useful for people with gut problems, such as inflammatory bowel diseases or coeliac disease — which can stop them absorbing certain nutrients.

‘A 2019 review concluded ‘penetration of vitamin D3 through skin is feasible’ and ‘a promising way of supplementation’, but there were some problems getting it through the skin barrier at times, reported the Journal of Cosmetic Dermatology. So for the time being, you’re better off taking a tablet or oral spray.’ 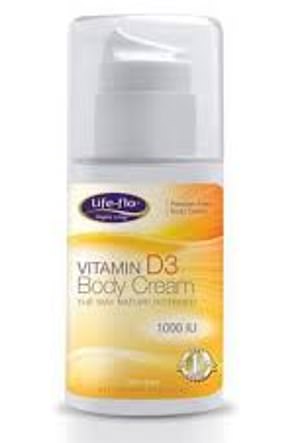 Claim: This daily body cream will soothe dry skin with shea butter, and deliver 1,000IU (25 mcg) of vitamin D3 with each pump.

Expert verdict: ‘I’m unsure how much of the 1,000IU dose would pass through the skin and be absorbed into the blood with this skin cream,’ says endocrinologist Professor Kevin Shotliff.

‘One study in 2014 described how topical delivery of 5,000IU of vitamin D3 via a body cream increased the blood levels of vitamin D in 24 women by around three times. But this is only one report and the sample size is small.

‘There is more chance for a patch to deliver the vitamin D, as it’s on the skin for longer and not wiped off by clothing or sweat — plus, you can be more accurate with the dose with a patch than a cream, where the dose depends on how well a person applies it. It’s too early to recommend using this type of delivery to meet vitamin D needs.’ 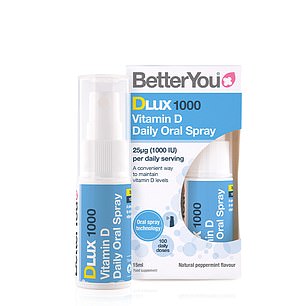 Claim: Each squirt provides 1,000IU (25 mcg) of vitamin D3 that the maker says will quickly enter the bloodstream in the mouth for optimal absorption.

Expert verdict: ‘A trial published in the European Journal of Clinical Nutrition in 2019 found that oral vitamin sprays are just as effective as tablets in terms of absorption,’ says endocrinologist Professor Kevin Shotliff.

‘They are more convenient than pills for some people. As a good proportion of the UK population is deficient in vitamin D, having a supplement above the current recommendation — as with this product at 1,000IU per day — is sensible and will ensure that you get the amount needed, even if there are days when you forget. 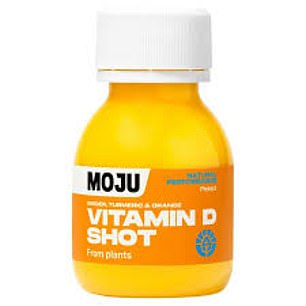 Claim: A shot made with orange, lemon and ginger juices, turmeric and 33 mcg vitamin D3 — derived from seaweed.

Expert verdict: ‘Seaweed is interesting as the vitamin D source here and means it is suitable for vegans,’ says endocrinologist Professor Kevin Shotliff.

‘An Australian study looked at how much vitamin D is contained in seaweed and found that its levels varied — so more research is needed to confirm whether it’s a truly reliable source.

‘If you have thyroid problems you should also check the iodine content in this product [it’s not listed], as seaweed can contain high levels, which can exacerbate thyroid issues.

‘It is also an expensive way to get your vitamin D — almost £60 per month if you have it daily — compared with some supplements at £1 per month.’ 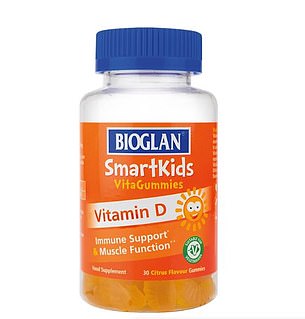 Clam: These citrus- flavoured, one-a-day gummies provide 10mcg of vitamin D for children over the age of four.

Expert verdict: ‘Children need just as much vitamin D as adults, but they’re more efficient at making it and also absorbing it from a pill,’ says pharmacist Aidan Goggins.

‘So even though these gummies offer only 10 mcg, this level has been consistently shown to be enough for children. Once they reach their teens, they need a 1,000IU (25 mcg) dose daily.’

However, while this is an easy way to boost vitamin D in children, ‘the first three ingredients are malt syrup, sugar and glucose syrup — three types of sugar’, adds endocrinologist Professor Kevin Shotliff.

‘This is counterintuitive as too much sugar is linked to obesity and poor dental health. And there have been reports of children over-consuming gummy vitamins, which just adds more sugar, so these must not be viewed as sweets.’