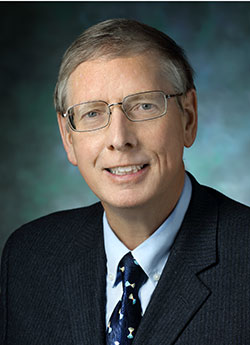 Richard L. Wahl, MD, the Elizabeth E. Mallinckrodt Professor and head of the Department of Radiology at Washington University School of Medicine in St. Louis, has been elected president of the Society of Nuclear Medicine and Molecular Imaging (SNMMI). He will serve a one-year term as president-elect beginning in 2020 and step into the presidency in July 2021.

Wahl, director of the university’s Mallinckrodt Institute of Radiology and a professor of radiation oncology, has been at the forefront of efforts to combine quantitative data from multiple kinds of scans to form so-called fusion images that can help physicians more precisely diagnose and characterize cancers. He was also among the first to harness the power of the immune system to precisely target radiation therapy to cancers, a technique that has become known as radioimmunotherapy.

Wahl is an elected member of the American Society for Clinical Investigation, the American Association of Physicians and the National Academy of Medicine. He serves as the chair of the Research and Discovery domain for the SNMMI’s Value Initiative. His clinical and research interests include radiopharmaceutical therapies, radioimmunotherapies, quantitative imaging and imaging of the immune system. For more information, seee the SNMMI press release.