The gadgets, popular among children, are judged to be much safer than smoking by top experts.

But the long-term effects of e-cigarettes remains a mystery and doctors fear a wave of lung disease and even cancer in the coming decades.

Experts told MailOnline the products should be sold under the same rules as regular cigarettes to dissuade young people from picking up the habit.

Professor Stephen Turner, a respiratory paediatrician at Royal Aberdeen Children’s Hospital, said: ‘I am very keen that children should not use any nicotine-containing products.

‘E-cigarettes should be sold under the conditions currently applied to other over-the-counter nicotine-containing products.’

Cigarettes are currently sold with graphic warnings and in plain packaging.

Professor Andrew Bush, a paediatric respirologist at Imperial College London, said: ‘These things have not been around long enough for us to be complacent about them.

‘I think they should be treated in the same way as tobacco.

‘They are being aggressively marketed to teenagers and younger, and this must stop.’ 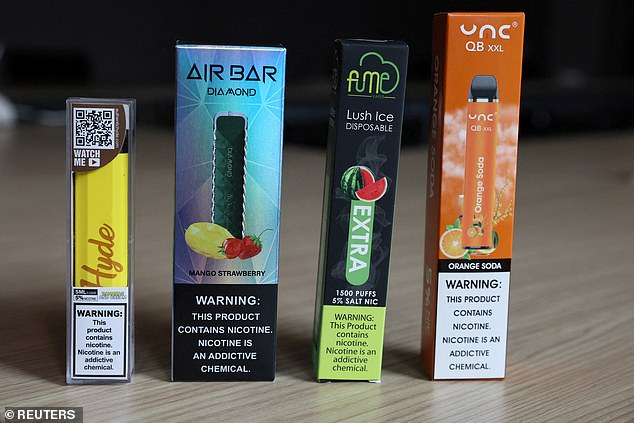 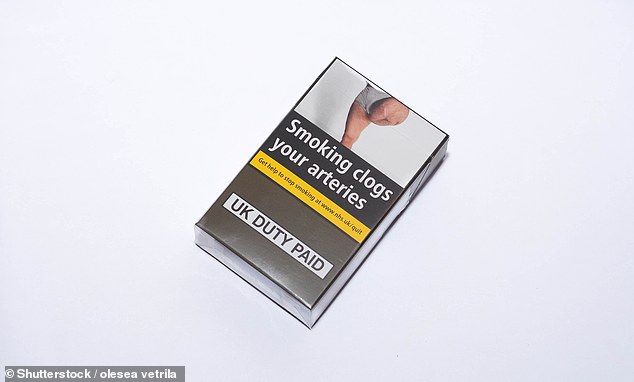 Graphic warnings have been a mainstay of tobacco products in the UK since 2008, when smoking was first banned in pubs and restaurants. They were made bigger in 2016, and manufacturers were forced to put the messages on the front and back of packets 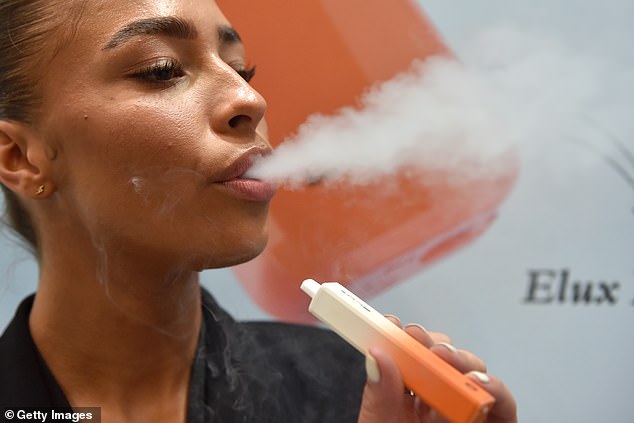 People who vape experience ‘worrisome changes’ in their blood pressure

University of Wisconsin experts found vaping and smoking cause people’s heart rates to spike 15 minutes after use and put the body in ‘fight or flight’ mode.

The study, presented at the American Heart Association Scientific Sessions 2022, looked at data for 395 participants — 164 vapers, 117 smokers and 114 who had no history of nicotine, e-cigarette or tobacco use.

But the study has not been peer-reviewed and was only observational, so researchers could not prove vapes were actually causing the heart issues.

Vapers perform worse when exercising than non-smokers and are more akin to smokers, a study claims.

Researchers looked at data from the same participants as the previous study.

After 90 minutes on the machine, they were given four heart screenings to determine overall health of the organ.

People who vaped scored 11 per cent lower than those who did not use nicotine.

Smokers had test scores 16 per cent lower than the control group.

Dr Aruni Bhatnagar, a professor of Medicine at the University of Louisville said: ‘These studies add to the growing body of science that shows similar cardiovascular injury among people who use e-cigarettes and those who smoke combustible cigarettes.’

Vaping is ‘just as bad as cigarettes for your heart’

Vapers are at the same risk of heart disease as cigarette users, according to US federally-funded research.

In two studies, one on mice and one on people, e-cigarettes were found to cause similar damage to blood vessels as smoking tobacco.

The findings from experts at the University of California, San Francisco were published in the American Heart Association’s journal Arteriosclerosis, Thrombosis and Vascular Biology (ATVB).

Despite the difference in ingredients that make up e-cigarette aerosol and cigarette smoke, the researchers found that blood vessel damage does not appear to be caused by a specific component of cigarette smoke or e‑cigarette vapor.

Rather, it appears to be caused by airway irritation which triggers biological signals in the valgus nerve.

Dr Matthew Springer, a professor of medicine in the division of cardiology at the University of California, San Francisco said: ‘We were surprised to find that there was not a single component that you could remove to stop the damaging effect of smoke or vapors on the blood vessels.’

‘As long as there’s an irritant in the airway, blood vessel function may be impaired,’ he said.

Despite it being illegal to sell e-cigarettes to under-18s, one in 10 secondary school pupils are now regular users — double the proportion less than a decade ago.

Almost every high street now has a designated vape shop, with e-cigarettes sold for as little as £5.

Unlike tobacco, however, the gadgets don’t need to be hidden behind shutters. This is despite some being built to contain as much nicotine as 50 cigarettes.

They are often sold in glossy displays and in a variety of snazzy colours and child-friendly names and flavours, like bubble-gum and strawberry milkshake.

The marketing of the devices has been linked to alcopops, alcoholic drinks sold in bright neon-colours which are ultra sweet or fruit flavoured.

A Government-commissioned review published in June recommended a review of vape flavours to ensure they don’t appeal to young people.

The paper, by former children’s charity chief Javed Khan, also recommended that cartoons and images on vaping products be banned.

It did not call for cigarette-style warnings, although it did admit warning labels about e-cigarettes’ harm do increase people’s perception of the risks.

The researchers said more studies are needed about the effectiveness of warning labels ‘highlighting the relative harms of smoking and vaping’.

Graphic warnings have been a mainstay of tobacco products in the UK since 2008, when smoking was first banned in pubs and restaurants.

They were made bigger in 2016, and manufacturers were forced to put the messages on the front and back of packets.

They include both text and picture health warnings, such as an image of cancerous lungs.

Vapes are currently only required to be sold with labels warning that they contain nicotine, which is highly addictive.

But these are often much smaller than those seen with cigarettes due to the packaging size and do not warn of other potential health risks.

E-cigarettes allow people to inhale nicotine in a vapour — produced by heating a liquid, which typically contains propylene glycol, glycerine, flavourings, and other chemicals.

Unlike cigarettes, they don’t contain tobacco, nor do they produce tar or carbon — which are two of the most dangerous elements.

But they can include hundreds of unregulated chemicals, some of which are ‘known carcinogens’, according to a study published in Frontiers in Pediatrics last October.

Professor Bush said: ‘They are not regulated and they are not tested, and if anyone can find a website listing what’s in all these liquids and safe toxicity data, I’m his holiness the Pope.

‘We cannot be confident, which is why I cannot say they are safe.’

But the study, not peer-reviewed and was only observational, so researchers could not prove vapes were actually causing the heart issues.

And the University of Wisconsin team admitted they were not able to directly compare the effect of vaping and smoking on the heart because smokers in the study were much older.

Several other papers, including the Government-commissioned report, suggest vaping has fewer cardiovascular risks than smoking and people making the switch have better heart function.

Hazel Cheeseman, deputy chief executive of Action on Smoking and Health, told MailOnline: ‘There are far too many scare stories about vaping and not enough rational discussion of the evidence.

‘If you are a smoker switching to vaping is much less risky than continuing to smoke. The information in these studies does not change this fact.

‘Smokers should not be put off from using something that might literally save their lives.’

Health officials believe e-cigarettes can play a key role in weaning the remaining 5million smokers in Britain off tobacco and putting an end to the killer habit.

The Government has set an ambition to become the smoke-free by 2030, and sees e-cigarettes as a vital tool to helping people quit.

EVERYTHING YOU NEED TO KNOW ABOUT VAPING

E-cigarettes are devices that allow you to inhale nicotine in a vapour rather than smoke.

They do not burn tobacco or produce tar or carbon monoxide — two of the most harmful parts of tobacco smoke.

The devices work by heating liquid that contains nicotine and flavourings.

They can come as vape pens — which are shaped like a pen or small tube with a tank to store e-liquid and batteries — or pod systems that are rechargeable and often shaped like USB sticks.

E-cigarettes are not risk-free but are believed to cause less harm than smoking.

However, its liquid and vapour contain harmful chemicals that are also found in traditional cigarettes, but it much lower levels.

These chemicals have been linked to lung inflammation, chronic coughs, shortness of breath and lung disease.

There have also been cases of e-cigarettes exploding or catching fire.

Can children buy them?

A law came into force in 2011 which made it illegal to sell e-cigarettes to under-18s in the UK.

However, there has been reports of children buying them directly from shops.

What action do experts want?

Campaigners have called for more funding to enforce the laws against underage sales, action on child-friendly packaging and labelling, as well as promotion on social media.

And a Government-commissioned review published in June recommended a review of vape flavours to ensure they don’t appeal to young people.

The paper, by former children’s charity chief Javed Khan, also recommended that cartoons and images on vaping products be banned.

Have other countries already taken action?

The US Food and Drug Administration banned all products sold by e-cigarette company Juul in June.

It found that there was not enough evidence to confirm its products did not harm public health.

However, the FDA then paused its decision in July while it carries out an additional review on the company’s products.

The US regulator had already banned fruity flavours of e-cigarettes.