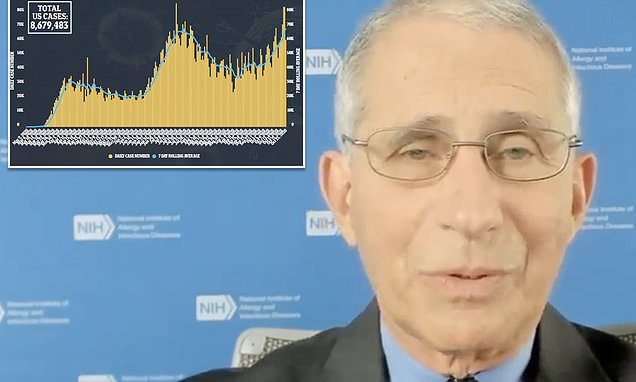 The US is still in an ‘elongated first wave’ of the pandemic, Dr Fauci says after daily coronavirus cases hit record-highs over the weekend

The U.S. is still in its first wave of the coronavirus pandemic, top infectious disease physician Dr Anthony Fauci believes.

‘I look at it more as an elongated – and an exacerbation of – the original first wave,’ said Dr Fauci of the current state of the pandemic in the U.S. during at the Yahoo Finance All Markets Summit.

Nationwide, the number of new coronavirus cases confirmed on each Friday and Saturday exceeded 80,000 – breaking the July record of 75,723 cases in a day, according to tracking from Johns Hopkins University.

But Dr Fauci thinks the surges we are seeing now are not a yet a second wave, but a back-end result of the U.S.’s failure to ever drive daily infections down to a sufficiently low baseline to prevent resurgences.

‘Now as we’re getting into the cold weather, we came back up again to the worst that we’ve ever had, which was over 80,000 per day.’ 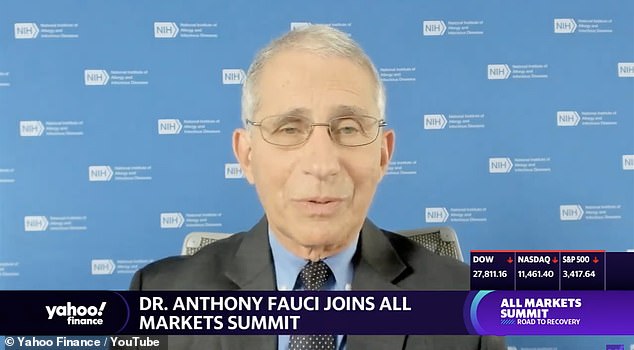 Dr Fauci said he thinks the US is still in its first wave of the coronavirus pandemic, he said during a Yahoo Finance Summit. He says that the nation never drove daily infections low enough to end that first wave – and is now starting to see record-breaking infections

On Friday, the US recorded a record 83,757 new coronavirus cases.

That figure was down only slightly on Saturday, to 83,718, according to Johns Hopkins’s data.

Many health experts have warned that these new highs are just the beginning of the dreaded second wave of the pandemic.

European health authorities are fairly convinced that they are seeing that second wave.

In the UK, for example, daily coronavirus cases never exceeded about 5,500 in the spring, and fell as low as 63 in the whole country in early July.

Now, a cases are spiking exponentially. Last week, the nation saw its all-time high of nearly 27,000 infections in a single day.

But, crucially, the UK had months over the summer when the baseline number of daily infections was consistently in the hundreds, not the thousands or tens of thousands.

To Dr Fauci’s mind, the US would have hit its ‘low baseline’ if it had managed to get down to 10,000 or fewer infections a day over the summer.

Daily case numbers bottomed out around 20,000, however. 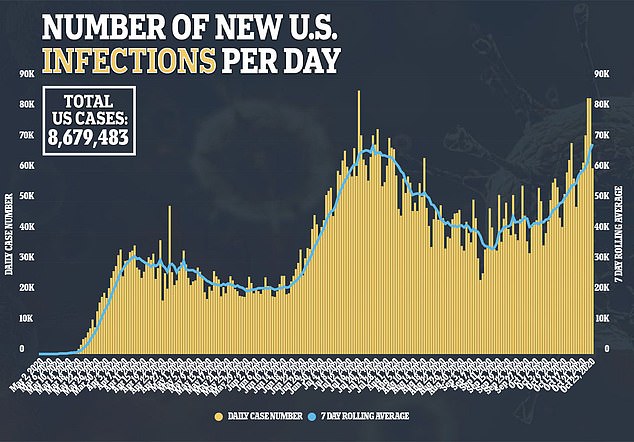 ‘We’ve never really had waves in the sense of up and then down to a good baseline. It’s been wavering up and down,’ Dr Fauci said.

‘So now, we’re at the highest baseline…[It’s] kind of semantics. You want to call it the third wave or extended first wave.

‘No matter how you look at it, it’s not good news.’

As is typically the case, Sunday saw lower number of new infections, with 60,789 new cases.

Still, experts, including Dr Fauci, anticipate that the winter will only continue to push more people in the US and abroad indoors for gatherings.

In turn, there are also liable to be more such gatherings in the first place amid the holiday season. 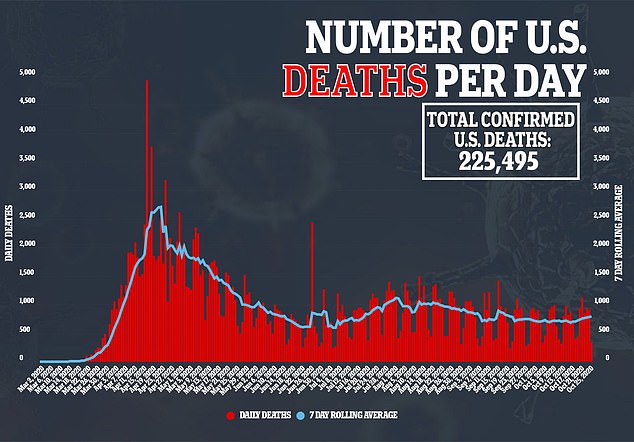 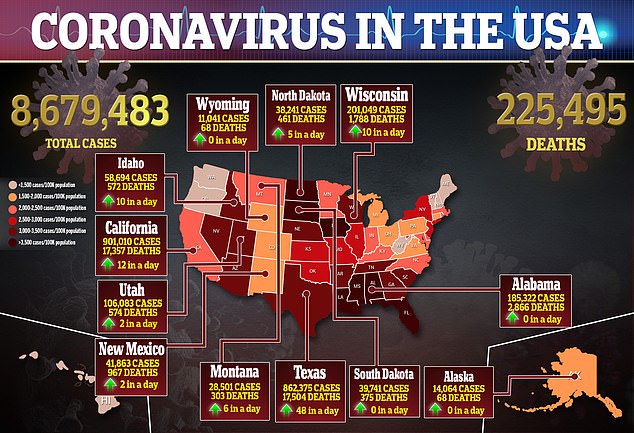 And indoor spaces are are ripe for transmission of respiratory viruses like flu and SARS-CoV-2.

Even as coronavirus cases rise to new daily highs, the number of deaths per day has not risen to the same height – though they may be beginning to creep up.

Friday and Saturday saw 943 and 917 deaths respectively – but those fatality numbers are still well below the thousands seen several days in the early spring.

But even if fatalities never rise that high again – most infections are now among younger people and doctors know better how to care for patients – experts predict they will indeed rise this winter as temperatures continue drop and pandemic fatigued Americans struggle to resist the temptation of gathering with loved ones indoors.

Dr Fauci even suggested the first time sine the start of the pandemic that the US might need to consider a mask mandate during a separate Monday BBC interview.

But, more optimistically, he also predicted that the US might have ‘safe and effective’ vaccines by December.