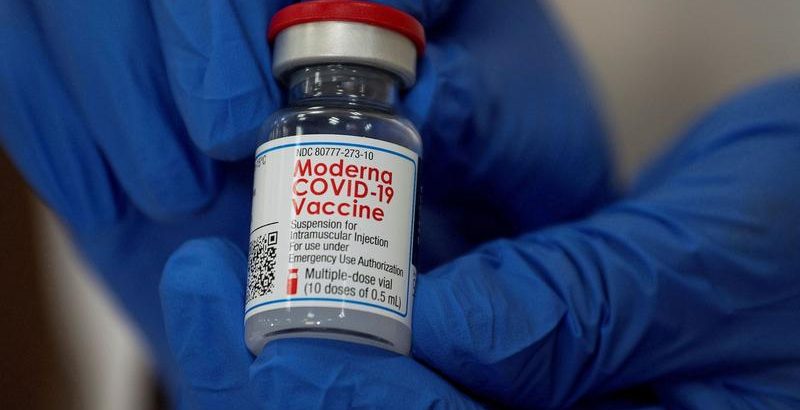 (Reuters) -U.S. health officials are reviewing reports that Moderna Inc’s COVID-19 vaccine may be linked to a higher risk of a rare heart condition in younger adults than previously thought, the Washington Post reported late on Thursday, citing people familiar with the review.

The review was focused on Canadian data that suggests a higher risk from the shot than the Pfizer-BioNTech vaccine, especially in men below the age of 30, according to paper.

The Washington Post report quoted a source saying it was too early for the regulators to reach a conclusion, and that additional work was needed before any recommendation was made.

“While we won’t comment on internal meetings or discussions, we can say that FDA is absolutely committed to reviewing data as it becomes available to us,” the U.S. Food and Drug Administration said. Moderna did not immediately respond to Reuters’ requests for comment.

The possible review comes just two days after U.S. health officials said that COVID-19 vaccine booster doses will be available to Americans from Sept. 20, over concerns that initial vaccinations may offer lower protection in the face of rising infections due to the Delta variant.

Health regulators in June had added a warning to the literature that accompanies mRNA vaccines produced by Moderna and Pfizer to flag a rare risk of heart inflammation seen primarily in young males.

Data from a government agency’s safety monitoring system in that month suggested a rate of 12.6 cases of heart inflammation per million in 12-to 39-year-olds.

The benefit of mRNA shots in preventing COVID-19 continues to outweigh the risks, regulators in the United States and the EU as well as the World Health Organization have said.

If new information changes the risk-benefit profile of COVID-19 vaccines, the FDA will update the public accordingly, the agency said in an email.

There might be a 2.5 times higher incidence of myocarditis in those who get the Moderna vaccine compared with Pfizer’s vaccine, the Post quoted a source as saying.

Roughly 142 million shots of the Moderna vaccine have been administered in arms, according to U.S. government data as of Thursday.