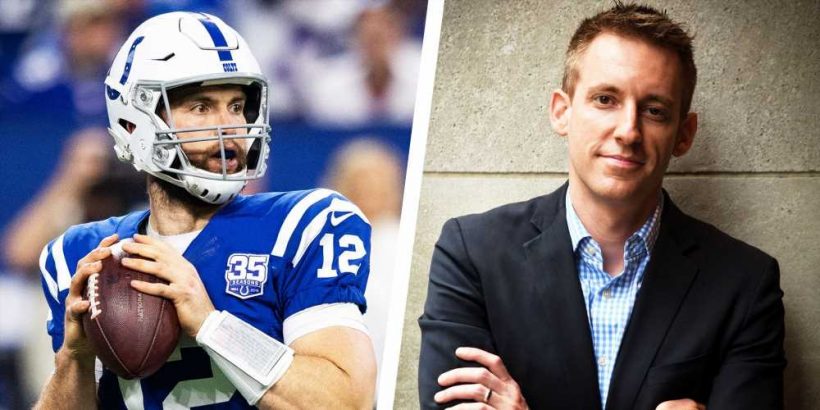 Andrew Luck is a tough guy. Just rewind the DVR to game nine of the 2015 season. His underdog Colts were leading the unbeaten Denver Broncos. In the fourth quarter, Luck initiated a QB scramble, and two behemoth Bronco defenders pummeled him with the kinds of hits that make you simultaneously love and hate football. Luck went on to finish that game, which the Colts won 27–24, but he suffered a lacerated kidney and missed the next seven. Matt Hasselbeck, Luck’s backup at the time and currently an NFL analyst at ESPN, remembers that fourth quarter. “I said to Andrew, ‘The game is won. I’ll finish it out. It’s just a couple of kneel-downs.’ And he’s like, ‘No! I’m not coming off the field.’ ” Hasselbeck describes Luck as “old-school tough.”

Jason Kander is also a tough guy. An Army vet who worked as an intelligence officer in Afghanistan, Kander investigated some of the roughest criminals and terrorists in that troubled country—intense, often grueling work that would torment him for years afterward. While enduring this trauma, Kander breezed into the Missouri House of Representatives in 2008, then won a hotly contested race in 2012 to become Missouri’s secretary of state at the age of 32. Four years later, he presented a fierce challenge to incumbent senator Roy Blunt, one galvanized in part by a viral campaign video explaining his campaign’s support for stiffer gun-control measures while showing Kander, blindfolded, assembling an assault rifle. Senator Jon Tester of Montana sent a message to his supporters encouraging them to donate to Kander’s campaign, promising them that “Jason isn’t running short on toughness.”

Jason Kander before delivering his concession speech in his run for U.S. Senate in Missouri in November of 2016.
Whitney CurtisGetty Images

Kander lost, but a mere two years later, tough guy that he is, he found himself running for mayor of Kansas City—and touted in some circles as a potential presidential candidate. Then, to the surprise of many, he quit the race. In a strikingly candid post on Facebook, he detailed his need to work through his unaddressed post-traumatic stress disorder and depression. “After I came back from Afghanistan in 2007, I always had a story I could tell myself about why this wasn’t PTSD,” he says of the thoughts that raged through his mind. “I kept telling myself that I wasn’t worthy of PTSD, because I hadn’t earned it.” Internet trolls smeared Kander for running from his “fake soldier” status and labeled him a quitter.

Months after Kander’s announcement, Luck made his own unexpected news. “I’ve been in this cycle of injury, pain, rehab, injury, pain, rehab, and it’s been unceasing, unrelenting, both in-season and off-season, and I felt stuck in it,” the 29-year-old quarterback told reporters at a press conference. “The only way I see out is to no longer play football.” Veteran sports commentator Doug Gottlieb tweeted, “Retiring cause rehabbing is ‘too hard’ is the most millennial thing ever,” and fans in Lucas Oil Stadium booed Luck as he walked off the field for the last time. “I’d be lying if I didn’t say I heard the reaction,” he told reporters. “It hurt.”

Luck at his retirement press conference in August of 2019.
Getty Images

“A lot of guys talk about strength in terms of ‘toughness,’ ” says Andrew Smiler, Ph.D., coauthor of The Masculine Self. This “might register as physical strength but often gets tied up in notions of being independent, being able to take care of yourself and dust yourself off, refraining from showing softer emotions like crying or being anxious, and forcing your injured but still-functional body back to work.” And you don’t have to be a veteran of sport or combat to know someone who boasted that he “never missed a day of work” or “always got the job done.” Strength was something sharpened daily on a grindstone, and if you quit, you were weak. That’s always been the myth, anyway—the strength myth.

But for all the haters who booed and shamed Kander and Luck, there were legions of supporters, online and IRL, who offered up praise. To Kander, Vice President Joe Biden tweeted that “public service takes many forms, and bravely stepping forward today is exactly that. By sharing your story, you are saving lives. Others will get the help they need because of you.” Hasselbeck says his old teammate’s decision could help redefine strength for the next generation of players. “It trickles down to college, high school, Pop Warner. Do you really want your kids saying ‘I’m fine, coach’ to every question?”

Andrew Luck walks off the field following reports of his retirement after a preseason game at Lucas oil Stadium in August 2019.
Michael HickeyGetty Images

Luck’s and Kander’s announcements, though entirely coincidental, combined to form a signal moment in the evolution of how we talk about, think about, and act upon things like quitting, vulnerability, and strength. And it turns out we’ve been talking, thinking, and acting all wrong.

Of course we have. Dozens and dozens of books and not a few TED Talks have been telling us for years that the strength myth is a bunch of baloney. Brené Brown, Ph.D., is a researcher at the University of Houston who has spent decades studying the pernicious effects of the old-school, hard-nosed, take-it-like-a-marine mentality on men. Toward the end of her 2019 Netflix special, The Call to Courage, she shares an anecdote about her work with the U. S. Army Special Forces. She asked them if they could give her an example of courage they’d witnessed that did not involve uncertainty, risk, and emotional exposure. After a long pause, one soldier answered: “Three tours, ma’am. There is no courage without vulnerability.”

Perhaps the kind of strength with the greatest cultural currency right now is grit. Angela Duckworth, Ph.D., is a professor of psychology at the University of Pennsylvania; the founder and CEO of the youth-oriented, fortitude-building Character Lab; and author of the self-help best seller Grit. What separates grit from strength, Duckworth argues, is that grit considers the future. “Grit is very much about the long play, what are you trying to do with your life, what is your purpose,” she tells Men’s Health. “Sometimes you have to change tactics to stay on target based on that understanding of your broader or subordinate goal.”

For Kander, shifting from the present to the future was critical. “I was always in a survival mode, just like when I was deployed, and I could get by on adrenaline that helped me endure the pain,” Kander says. “But if you don’t feel right, if you’re just enduring pain, you need to ask for help.” And all of us are hurting inside, he adds. “Everybody has some sort of struggle, and in positions of considerable responsibility, I would certainly prefer to have people who have addressed and treated their invisible injuries. . . . The more we talk openly about mental-health issues in our own personal orbits, the more we will find that people will be supportive and hold each other accountable.

“Remember, asking for help has nothing to do with weakness,” Kander stresses. “You don’t work out because you’re weak. You work out to get stronger. And if you want to be mentally stronger, that takes effort, too.”

Luck, for his part, is dedicated to strengthening his whole self as he pursues a new path. “Right now my journey just doesn’t include football moving forward, and I feel so grateful,” he emphasized at his retirement press conference. “I understand the suddenness and the surprise behind it. I really do. But I also know I have so much clarity about my next steps moving forward.”

Lately he’s been spotted hanging out and cracking smiles with former teammates. He and his wife, Nicole, are preparing for the birth of their first child. (He’s also a millionaire many times over, which helps.) And as Hasselbeck observed, Luck’s decision could make it easier for future football players to leave on their own terms. “When an athlete, war hero, or famous male shares their internal pain or conflict, it serves as a signal to other men that they might be able to be more real with their own nonperfect lives,” says Fredric Rabinowitz, Ph.D., a professor of psychology at the University of Redlands. “They serve as models for a more holistic version of masculinity, where it’s possible to be both strong and expressive.”

Kander now heads the Veterans Community Project, which helps provide housing and other assistance for homeless veterans. “Once I got past the emotional numbness, I could also address all these physical aches and pains I had,” he says, “problems that I thought were chronic but which have actually faded away as I’ve been able to exercise daily again and get in what might be the best physical shape of my life, my time in the military included.”

Two tough guys, two surprise announcements, one takeaway: Strength is about more than putting in the work and not complaining. It’s about more than suiting up and getting the job done without ever calling in sick. It’s about being honest and open, with family and friends, regarding your physical and emotional health. It’s about taking care of yourself so you can take care of others. That’s what these guys have taught us about strength. And unlike the myth that came before it, this time it’s real.