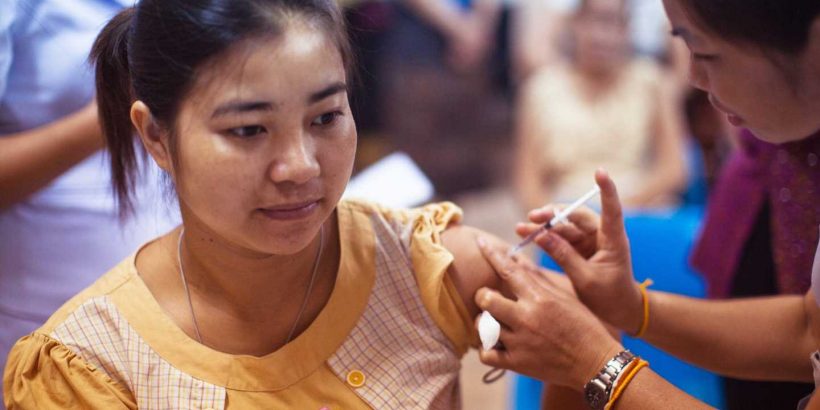 Gloria Torres-Herbeck gets the flu vaccine every year, but the 53-year-old teacher in Rochester, Minnesota, isn’t yet convinced she wants to be first in line for a potential COVID-19 vaccine.

“I’m not super old, but I’m not as strong as other people,” she said. “So, I need to be realistic on my own situation. Do I want to participate in something that might be a big risk for me?”

This month, the Food and Drug Administration gave emergency use authorization for one vaccine and is weighing approval of another. So, public health officials around the country are gearing up for what might be as challenging as figuring out how to store a vaccine at 70 degrees below zero Celsius. They need to persuade people who are part of communities that have been hit hard by the virus—those in low-income families and some minority populations, especially Black and Latino residents—to take a vaccine developed in less than a year and approved under emergency use authorization.

Yet there are a few places where officials think they have a head start. Rochester, Minnesota, home of the Mayo Clinic, is one of them. The Rochester Healthy Community Partnership has been working to reduce health disparities in the area’s immigrant communities, including Somali, Hispanic, Cambodian, South Sudanese and Ethiopian residents, for 15 years.

The partnership is composed of Mayo health providers and researchers, county public health officials and community volunteers like Torres-Herbeck, who immigrated to the U.S. 27 years ago from Mexico. One of the first of its kind, other similar efforts have sprung up around the country, but no one officially tracks such partnerships.

“What we realized when the pandemic hit in spades in March was that with long-established partnerships we were uniquely positioned to leverage” trust built up over the years between Mayo experts and their community partners, said Dr. Mark Wieland, who helps direct the group and studies the impact of such partnerships. “We realized we were obligated to jump in with two feet.”

Although only preliminary evidence has been gathered so far, there are indications that since the efforts began, Rochester has increased COVID-19 testing, improved contact tracing and boosted preventive behaviors such as mask-wearing, hand-washing and physical distancing in these vulnerable communities, he said. The group is hoping those early successes portend well for vaccine acceptance.

The Rochester partnership is banking on a commonsense approach that focuses on shared values, transparency and clear communication.

It’s a strategy that has succeeded in the past.

When a measles epidemic hit the large Somali population in Minneapolis-St. Paul in 2017, the Mayo Clinic reached out to community leaders among the 25,000 Somali immigrants in the Rochester area. Many had been frightened of the measles vaccine by baseless claims that it could cause autism, and vaccination rates were low in the community. Medical experts held town hall meetings in mosques and community centers, answering questions about vaccine safety and reassuring people that there was no scientific evidence of a link to autism. Somali actors created YouTube videos to help address common concerns. In the end, there were no recorded cases of measles in Olmsted County, home to Rochester.

About a year ago, Dr. Robert Jacobson, medical director for the Population Health Science Program at Mayo Clinic, at the request of a rabbi visited an Orthodox Jewish community in New York in which vaccine refusal was fueling another measles outbreak. He helped health care leaders there allay concerns.

“The Orthodox Jews in that community were refusing that vaccine for the same reason we were recommending it,” Jacobson said. “They were trying to protect their children.”

Efforts by Jewish leaders, public health experts such as Jacobson and lawmakers who tightened up laws on vaccine exemptions helped quell the outbreak.

Since March, the Rochester partnership has broadcast similar messages about COVID-19 to diverse audiences. Fear or misunderstanding was an issue at the beginning of the pandemic. Health leaders found that members of the immigrant communities were hanging up when the public health department called. So, the partnership developed messaging in several languages to explain the importance of the phone calls. They worked around problems, including that other languages don’t always have terms that mesh with English words for illnesses. For example, the word for “cold” and “flu” is the same in Somali.

At the same time, these public health teams report back to the medical experts on what the community needs. “They’re the experts on the subtleties of their communities,” Wieland said.

So when the group learned that many immigrants were intimidated by COVID-19 testing and unsure of the logistics, the group recommended simplifying the process: Now, videos featuring community leaders on social media direct people to testing sites. Once there, anyone who doesn’t speak English automatically gets tested—no identification or insurance card necessary.

“We think that’s part of the reason that, as a county, we have overtested minority populations in relation to white populations,” Wieland said.

THE “WHY’ WAS MISSING

Only 40% of older Black adults and 51% of older Hispanics said they are somewhat or very likely to get the COVID-19 vaccination—compared with 63% of older white people, a University of Michigan poll shows. Their concerns mirror Torres-Herbeck’s: how well will the vaccine work or how safe it will be.

An even more recent survey of people of all ages for the COVID Collaborative, an advocacy group of national and state health and economic leaders, the NAACP and other groups shows trust in vaccine safety is as low as 14% in Black Americans and 34% in Latinos.

Older adults said they would like recommendations from doctors, health officials, or family and friends—people they trust, according to the Michigan poll. And Black Americans are twice as likely to trust Black messengers versus white messengers, the other survey showed.

“Even if people don’t trust doctors in general, they trust their own doctor,” said Dr. Preeti Malani, one of the authors of the Michigan survey and chief health officer of the university.

The advantage of groups like the Rochester partnership is that its members are also trusted messengers.

Several weeks ago, Torres-Herbeck said, she talked to a landscaper who didn’t wear a mask while working with his business partner. She told him that COVID-19 is a virus and explained how it spreads. He was surprised, and Torres-Herbeck understood. “When I came here 27 years ago, we were not as educated on that,” she said. “When I grew up, it was believed that if you walk barefoot you will catch a cold.”

Often, she said, public health officials provide directions on how to act and what to do, such as use a mask and clean your hands, but don’t explain why.

Now when she talks to him, he puts a mask on.

In mid-November, Jacobson visited with members of the Rochester partnership via Zoom, part of the group’s initial effort to disseminate vaccine information.

Approving a vaccine under emergency use authorization is no less stringent than the normal procedure, he explained. The process has been dramatically sped up and condensed, he said, by the amount of money poured in and newer technology—and by increased FDA resources.

It’s not all about disseminating facts, however. Focusing on shared values is key to building trust. So when Adeline Abbenyi, the Mayo Clinic program manager for the Center for Healthy Equity and Community Engagement Research, said her mother, who had never feared vaccines, was hesitant to get a COVID-19 vaccine, Jacobson understood.

“A lot of us are feeling the same way,” Jacobson said in that Zoom meeting. “I go into this optimistic that we will have a vaccine that’s safe and effective, but I won’t use it until I see that evidence” of safety and efficacy the FDA is reviewing.

It’s normal for people to hesitate, he said, but that is far different from—and more widespread than—the anti-vaccine movement. Doctors and nurses getting the first doses will likely help many people overcome that hesitancy, he said.