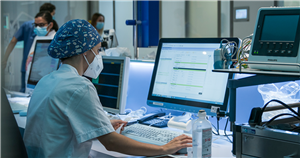 At few times in recent memory has the resolve of hospitals and health systems across the U.S. – and the wherewithal of the information systems and digital data that keep them running – been put to the test quite like it was in 2020.

An all-hands-on-deck push from heroic physicians and nurses to save the lives of as many COVID-19 inpatients as possible. A massive nationwide scale-up of telehealth and remote patient monitoring unlike anything yet seen. A system-wide shift to remote work and virtual, cloud-enabled collaboration. Ramped up ransomware incursions from aggressively opportunistic cyber crooks. Ongoing interoperability challenges as testing sites, labs, providers, payers and public health agencies tried to manage fast-moving waves of new patient data. Major new federal rulemakings meant to enable more seamless data exchange in the future. Ne

But through it all, the resilience, persistence and innovation have been remarkable as health systems continue the digital transformations they’d embarked on in the “beforetimes” – and redoubled their efforts to accelerate them in earnest in response to this public health emergency.

The hope, of course, is that the galvanizing technology innovations that have emerged from the stress and disruption of the past year will be foundational to a better, brighter world in 2021 and beyond. In the meantime, here are some of the most-read Healthcare IT News stories of 2020 so far.

Telemedicine during COVID-19: Benefits, limitations, burdens, adaptation. It comes as little surprise that the top story on this list explores the dimensions of a theretofore much-discussed but underused modality of care: Telehealth. This was written just days after nationwide lockdowns and cessation of nonessential services necessitated an immediate move to virtual care. The shift was swift, vertiginous and, for some providers, an entirely new experience. This in-depth story from HITN Features Editor Bill Siwicki offered an in-depth look at the opportunities and challenges – and fundamental people, process and technology changes – inherent in this quick about-face: telehealth as a new normal.

Comparing 11 top telehealth platforms: Company execs tout quality, safety, EHR integrations. Here’s an interesting one: This story actually dates from way back in the pre-pandemic past of 2017. Telehealth has been around a long time, after all, with many varied companies jockeying for position over more than two decades to offer connectivity tools, video platforms and integrated workflows that enable quality medical care to reach rural, remote or underserved populations. Until this year, however, most of that had been at the margins, more or less. In March 2020, it had become imperative and essential – and scores of providers or all shapes and sizes needed to stand-up durable telemedicine offerings quickly. So, naturally, many of them came here to explore their options.

Digital thermometer data may provide insight into COVID-19 surges. Another story from the very early days of the pandemic, this one speaks to the power of public health analytics and data visualization – skills that millions of Americans have learned and honed over the past nine months, as they load and reload online maps and graphs showing how the virus is spreading, surging and, sometimes, subsiding across the country. It also demonstrated the power and utility of increasingly powerful yet affordable connected health devices, which could be distributed to populations who need them most as important sentinel surveillance tools.

Epic tells customers it will stop Google Cloud integrations, says report. This is one of the few non-COVID-19 stories on this list, but when the biggest EHR vendor cuts ties with one of the premier cloud service providers – reportedly because of “insufficient interest” from customers, but also in light of a then-controversial data sharing deal that had raised privacy concerns – it makes headlines. But of course, Epic makes headlines more times than not, as it did numerous times in 2020 – starting with its debut of ambient voice technology. The company also gained brief notoriety for the vocal employee backlash against its COVID-19 return-to-work policies (which were later walked back). In October, founding CEO Judy Faulkner spoke about some of Epic’s lessons-learned from COVID-19, including faster dissemination of new clinical insights and the ability to do installs quicker and less expensively.

Readers share their stories of how the COVID-19 pandemic is affecting them. As the gravity of the COVID-19 crisis became apparent, HITN, Healthcare Finance News and MobiHealthNews reached out to their respective audiences to learn how it was affecting them, personally and professionally. Other stories in the multi-part series – from CEO, a dermatologist adjusting to telemedicine, a small business owner, a truck driver – were powerful reminders of the challenges we’re all facing.

White House to hospitals: Bypass CDC, report COVID-19 data directly to HHS. In the thick of battle, hospitals were suddenly told to make major changes to the where and the how of their data reporting processes. It was a move that left many scratching their heads – subsequently eliciting reactions such as “the goalposts keep moving” and “reckless.” HITN Senior Editor Kat Jercich has been closely following this ongoing story. You can catch up on her coverage here and here and here and here, to name just a few. With the promise of vaccines on the horizon, a new administration set to take office in January and the necessity of accurate public health reporting is more important than ever. This is a story worth watching.

WHO, coronavirus testing lab hit by hackers as opportunistic attacks ramp up. At first, as hospitals in China, then Europe, then the U.S. began to buckle under the enormity of the COVID-19 crisis, at least a few of the hackers and cyberattackers of the world gave a brief indication that they recognized the stakes. But that “ceasefire,” if it ever existed was short-lived. Now, nine months later, they’re still taking aim at the supply chains that are the only hope for turning this crisis around.

The effect of the COVID-19 epidemic on health and care – is this a portent of the ‘new normal’? “The post-COVID world is likely to be remembered as the time when the care of other medical interactions, like the provision of primary care or the management of non-communicable diseases, shifted to digital modalities as the default rather than the exception,” said HIMSS Chief Clinical Officer Dr. Charle Alessi in March.

Coronavirus forces cancellation of HIMSS20. This was not something anyone wanted to happen. But as the weeks and days ticked by in late February and early March, the relentless spread of the novel coronavirus forced the decision. (And as information has emerged from other conferences that were held around the same time, it was the right one.) But the immediate pivot to virtual events, and the spring launch of the HIMSS20 Digital event proved the value of knowledge-sharing and connection, even at a distance. Since then the HIMSS online event offerings have continued apace, such as last week’s Machine Learning and AI for Healthcare, this week’s Healthcare Security Forum digital summits, and the ongoing Accelerate Health and Patient Experience digital series.

CMS final rule poses big hurdles for payers. On March 9, just days from when the pandemic became real for most people in the U.S., Department of Health and Human Services published the long-awaited interoperability final rules from CMS and ONC. (In any other year, the new regs would have been the talk of the industry for months. But, of course, more immediate events took priority.) This particular HITN story was focused on the unprecedented challenges facing health plans and insurance companies who want to comply with the API-enabled patient access and exchange requirements from CMS. There are challenges for providers, vendors and HIEs on the ONC front too. In light of COVID-19, there’s been some leeway given with regard to timelines and compliance dates – but change is coming for interoperability across the healthcare ecosystem. Keep an eye here for ongoing coverage of the rules and their potential.