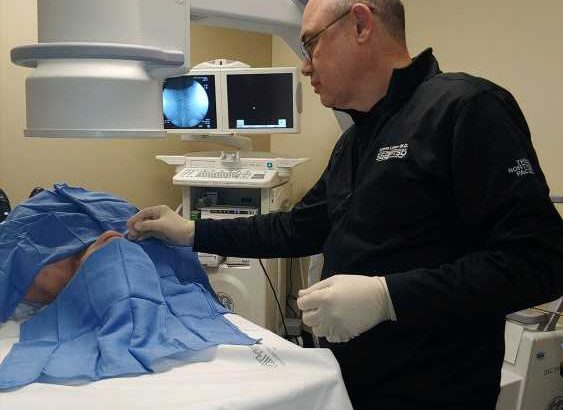 Post traumatic stress disorder (PTSD) affects over 10 million people in the U.S. alone (that number is prior to the COVID-19 pandemic), but one former pain management doctor has discovered something he thinks could change the lives of trauma sufferers forever.

Dr. Eugene Lipov, the Chief Medical Officer of the new Stella Center in Chicago, now wants to treat the majority of trauma sufferers through what’s called a “Stellate Ganglion Block,” a procedure that he perfected over the past 13 years, where he uses and anesthetic to actually block the nerves going from the ganglion nerve to the brain.

According to the Stella Center’s website, researchers found that after a traumatic event, the brain wound up “stuck” in a continuous arousal, or “fight or flight” state as a biological response to the trauma. Dr. Lipov says the Ganglion Block targets that response and treats it.

“I don’t like the term disorder,” says Dr. Lipov, who insists that PTSD is actually a physical “injury,” and that the word disorder makes people feel shame, or like it’s something they should just get over. He says if you look at brain scans of PTSD sufferers, you can see that there is change in the brain. “If you had a broken leg and kept walking on it, you wouldn’t do much to heal the leg. But if you had an X-Ray that said it was broken, you’d treat it. It’s the same with a scan of your brain — if you could see there was real trauma there, you would want to treat it.”

To undergo a Stellate Ganglion Block, Dr. Lipov injects a local anesthetic into the bundle of nerves found near the base of the neck. The process takes about 5 minutes, and the effect is often felt in the first 20 minutes.

Dr. Lipov says the Stellate Ganglion Block has actually been practiced since 1925, but back then, it was mostly used for pain management. Dr. Lipov later discovered it was also great in treating women with hot flashes. After reading a study from Finland about how the nerve clipping actually took away some PTSD in patients, he got curious about perfecting the process to treat trauma victims in the U.S. He was shocked to discover how well it actually worked.

“The success rate is over the 80 percent range,” he says. “A lot of patients start crying afterward, because they haven’t felt a real emotion in years. They can sleep, the nightmares go away, they can resume regular activity. Some soldiers can’t sit with their backs to the door, or loud noises trigger them, after the block this could be reversed. It may also help with sexual dysfunction, since that is a side effect of PTSD.”

RELATED: Women Who Had a Miscarriage May Develop Long-Term PTSD

Dr. Lipov is no stranger to trauma himself. When he was young, he lost a parent to suicide — as someone who has undergone the process himself, he says he can attest to its effectiveness. The best part of the treatment, he says, is that it can help wean people off of a class of drugs usually used to treat PTSD, which he says can have “terrible side effects,” including mood swings, anger, weight gain, diabetes, heart attacks and suicide.

Now Dr. Lipov is devoted to making the Stellate Ganglion Block as accepted as putting a cast on a broken leg. “Frankly it’s all I want to do,” he says of healing trauma patients. “As the practice becomes more accepted, I want to make sure other doctors perform the SGB as well as possible."

Dr. Lipov also believes that once the practice is widespread, SGB can help reduce the suicide rate. “PTSD is an injury. We can treat it as such. And most importantly, we can take the stigma out of suffering from trauma. It’s certainly nothing to be ashamed of."