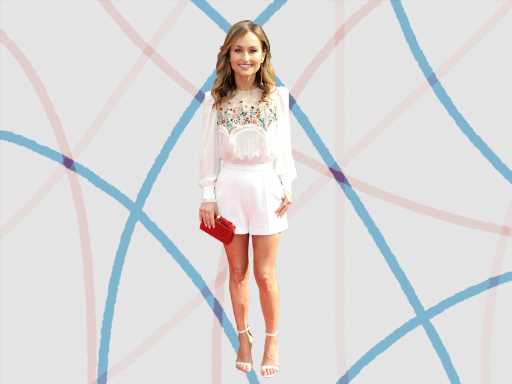 When we heard that Bobby Flay and Giada De Laurentiis were going to be starring in a new best friends foodie travel show on Discovery+ called Bobby and Giada in Italy, we were immediately sold. And since travel is currently out of the question, we’ve been craving escapist content like this show, which was filmed before the pandemic. As we watched, we were charmed by the delicious looking Italian food the duo were eating, but what really surprised us is that the first food De Laurentiis brought Flay to try in Rome was something so simple, you can make it at home: pizza bianca with mortadella, which is basically an Italian bologna sandwich. Yeah, we said it!

The first place De Laurentiis takes Flay in Rome is Antico Forno Roscioli, a restaurant that’s been around since the 1800s. It specializes in pizza bianca, which De Laurentiis describes as a soft white bread similar to focaccia. “In my family, we eat pizza bianca all the time,” De Laurentiis tells Flay, going on to say that when she’s in Rome, “the first thing I have usually is pizza bianca with mortadella.”

For those not in the know, mortadella is an emulsified sausage like bologna, made out of pork. But what makes it really special is that the emulsified sausage is mixed with cubes of pork fat, whole or chopped pistachios, and spices like black pepper and myrtle berry. It’s rich, savory, and utterly craveable. Luckily, you can find mortadella at most well-stocked super market delis, or you can treat yourself by heading to an Italian market or salumeria to get the real good stuff.

The key to replicating De Laurentiis’ favorite Roman sandwich at home is paying attention to the ingredients. If you can’t get pizza bianca, look for a plain, soft focaccia bread, and cut it in half horizontally. Ask the person working at the deli counter to slice your mortadella extra thin, so the slices are almost see-through. Then, make your sandwich by folding and layering your mortadella between the top and bottom halves of the focaccia bread. The layering is key, according to De Laurentiis – “they layer it so it’s nice and light; it’s not a heavy piece of meat.”

If you’re using quality ingredients, that’s all you’ll need to make the simple but delicious sandwich De Laurentiis grew up eating in Rome. And if you have any leftover mortadella (if there is such a thing!), you can use it up in her recipe for mortadella meatballs.

Before you go, check out our gallery below: