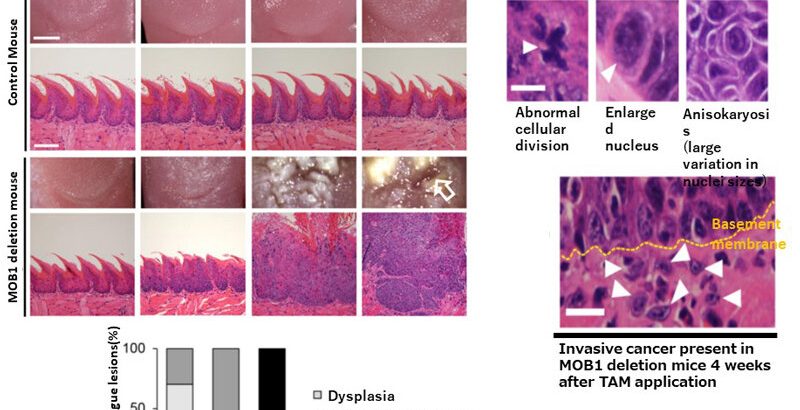 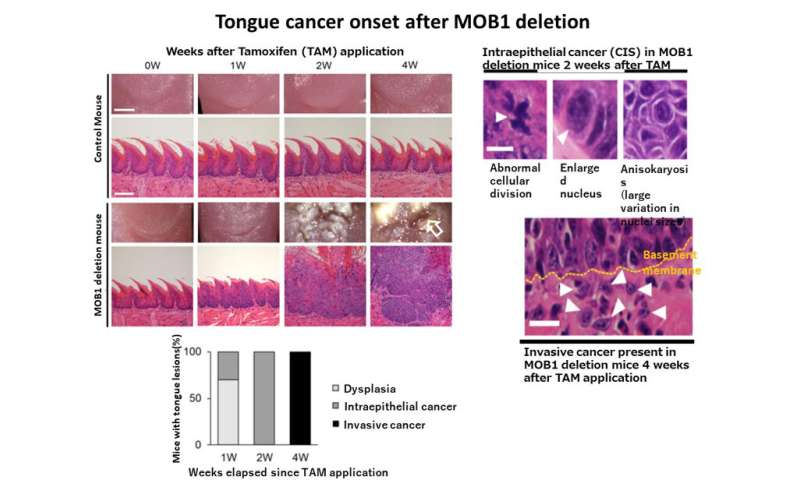 Joint research between Kobe University and National Hospital Organization Kyushu Cancer Center has revealed that mice with mutations in the YAP signal pathway develop head and neck cancer over an extremely short period of time (world’s fastest cancer onset mouse model), indicating that this pathway plays a crucial role in the onset of these cancers. This discovery may shed light on the development of new drugs for head and neck cancer.

This research resulted from a collaboration between a research group led by Professor Suzuki Akira and Associate Professor Maehama Tomohiko at Kobe University Graduate School of Medicine, and Dr. Masuda Muneyuki’s team at Kyushu Cancer Center.

These results were published in the American scientific journal Science Advances on March 18.

Head and neck cancer in humans

Head and neck cancer is the sixth most common type of cancer in the world, affecting 600,000 people annually. In Japan there are around 22,500 new cases every year. This ‘head and neck’ includes the oral cavity and areas of the throat (pharynx and larynx). Among these, mouth cancers (especially tongue cancer) are the most prevalent.

It is understood that exposure to carcinogens, such as those found in cigarettes and alcohol, as well as mechanical irritation of the mucous membranes in the mouth, tooth decay and improperly fitted dentures, are risk factors for the development of head and neck cancer.

In addition, 15% of head and neck cancer is caused by Human Papillomavirus (HPV), which in particular causes oropharynx cancer.

The prognosis for patients who are HPV-positive is relatively good. Conversely, prognosis is poor for HPV negative patients and in most cases, mutations are found in the tumor suppressor gene TP53 (p53). However, mutations in this gene alone are not sufficient to cause head and neck cancer. It has been thought that changes in other molecules are also necessary for cancer development, however these causes remain elusive.

From comprehensive cancer genome analyses, it is known that PTEN/P13K (46%), FAT1 (32%), EGFR (15%) gene mutations are also found in HPV-negative head and neck cancer. However, the genetic pathway of these molecules in relation to head and neck cancer development has not been sufficiently understood.

Up until now, research using mouse models of head and neck cancer has discovered that if both the p53 and Akt genes are mutated, 50% of mice will develop this type of cancer about 9 months after the mutation (the average mouse lifespan is 2 years).

The onset of cancer begins after many genetic mutations have accumulated (multistep carcinogenesis). Mice with a mutation in one important molecule usually develop cancer within four to 24 months (with the majority showing signs between six to 12 months). 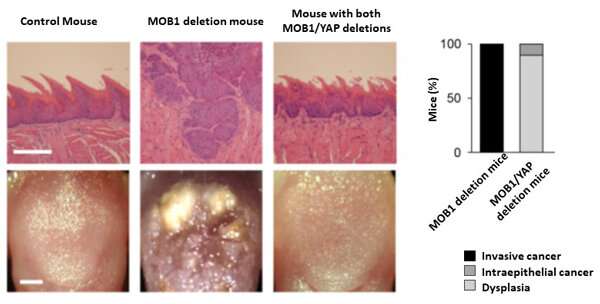 The function of the transcriptional co-activator YAP is to turn ‘on’ the transcription of gene clusters related to cell growth. The LATS/MOB1 complex phosphorylates YAP, thereby excluding YAP from the nucleus, leading to the subsequent degradation of YAP proteins. In other words, MOB1 and LATS act as a ‘brake’ (tumor suppressor) to inhibit cell proliferation facilitated by YAP. It has been reported that in 8% of human head and neck cancer cases, the YAP gene is amplified and there is a connection between YAP activation, cancer progression and poor prognosis.

This research group produced mice with MOB1 deletion in their tongues (so that YAP would be intrinsically activated) in order to perform a detailed analysis in vivo of the role that the YAP pathway plays in head and neck cancer.

This research group developed mice with MOB1 deletion in their tongues by applying the drug tamoxifen to their tongues and then modifying them genetically using the Cre-loxP system (*4).

Three days after applying tamoxifen, the amount of MOB1 had barely decreased, however by day 7, the vast majority of these proteins had disappeared. At this point, a third of the mice demonstrated rapid onset head and neck cancer (intraepithelial tongue cancer), with all mice developing the disease by day 14. The cancer had progressed in all mice by day 28 (invasive tongue cancer). The team succeeded in developing the world’s fastest mouse model of cancer onset (Figure 1). Both domestic and international patents for this model have been applied for.

YAP activation and tumorigenic properties of the tongue epithelium in MOB1 deletion mice.

The epithelial cells (on the surface of the tongues) of MOB1 deletion mice exhibited the following properties characteristic of tumor development: increased cell proliferation and cell saturation density, impaired cell polarity, low levels of apoptosis (cell death), increase in undifferentiated cells, and chromosomal instability (characterized by increases in aneuploid cells), multipolar spindles and micronucleated cells). On a biochemical level, activation of YAP and a decrease in LATS proteins was evident due to MOB1 deletion.

The epithelial cells acquired the characteristics of tumor cells due to the YAP activation caused by the deletion of MOB1.

YAP activation in the stages of tongue cancer in humans

The development of human tongue cancer can be divided to the following stages; the normal stage, the dysplasia stage, the intraepithelial cancer stage and the invasive cancer stage .

If we look at YAP activation across all these stages, we can see that YAP is enhanced in the dysplasia stage which proceeds the onset of cancer. YAP activation shows continued increase during the subsequent stages of cancer progression. In cases where YAP is highly activated, overall survival is decreased and the likelihood of cancer relapse is high.

In other words, YAP increases before the onset of cancer and continues to increase as the cancer develops and progresses. Accumulation of YAP is linked to poor patient prognosis. 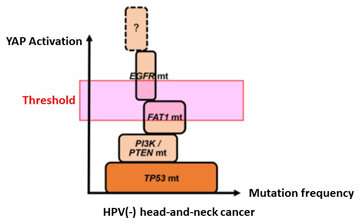 Cancer formation is dependent on YAP when MOB1 is deleted

Invasive cancer occurred in MOB1 deletion mice. However, when both YAP and MOB1 are deleted from mice, cancer onset is halted at the dysplasia stage, showing that the onset of head and neck cancer is dependent on YAP (Figure 2).

Among current YAP pathway inhibitors, the SRC inhibitor Dasatinib was shown to be the most effective (SRC has been previously shown to activate YAP both directly and indirectly). Dasatinib was shown to prevent the onset of intraepithelial head and neck cancer in the MOB1 deletion mice. It also suppressed the development of invasive cancer in MOB1 deletion mice that had reached the intraepithelial head and neck cancer stage.

In human head and neck cancer stem cells, it is possible to suppress cell proliferation either by inhibiting YAP gene expression or by adding YAP inhibitors. Cisplatin, which is commonly used to treat head and neck cancer, is augmented when YAP is suppressed.

Genetic mutations in p53, PTEN/PI3K, FAT1, and EGFR have been identified in HPV-negative head and neck cancer.

This research group showed that EGF signal activation and mutations in p53, PTEN and FAT1 each play a role in YAP activation. Furthermore, YAP activation gradually increases as these genetic mutations accumulate.

Normally, cancer takes time to develop as it is a multistep process. However, in this study, intraepithelial head and neck cancer rapidly developed just from highly strengthening YAP activation.

In conclusion, this study raises the possibility that the following process for head and neck cancer development takes place: A. Cancer develops when the YAP activation exceeds a threshold due to the accumulation of genetic mutations in p53, PTEN/PI3K, FAT1 and EGFR (Figure 3). B. Subsequently, YAP continues to accumulate after cancer has developed, resulting in cancer progression.

In addition, it has also been shown that risk factors for head and neck cancer, such as cigarette smoking, mechanical irritation of mucous membranes and HPV infection, also play a part in YAP activation.

The mouse model in this study: 1. Is the fastest mouse model in the world for showing the natural onset of cancer. 2. Can be used to visualize cancer onset and progression. 3. Allows cancers to be developed naturally at the same time. 4. Allows cancer onset and progression to be analyzed in mice immediately after birth, allowing drug tests to be conducted in a shorter period of time and in small quantities. The results suggest that this mouse model would be ideal, not only for research into developing new treatments for head and neck cancer, but also for cancer research in general.

It is expected that the YAP pathway will provide a good target for drugs used in the treatment of head and neck cancer because inhibiting YAP not only suppresses the cancer onset but can also prevent its progression.