When it comes to the ultimate Hollywood physique many contenders have come and gone. In the Eighties, bigger was better, and Stallone and Schwarzenegger’s uber-muscled action heroes were all the rage.

In the Nineties and Aughts, Matthew McConaughey’s beach-bum six pack appeal made him a star. Then the likes of Channing Tatum and Zac Efron took over with bodies that didn’t just look like they’d been chiselled out of mahogany, they could also bust a move or two on a dance floor.

All of which was… great.

But when it comes to real, bona fide movie muscle there’s only one contender. From the Nineties hedonism of Snatch and Kalifornia to topless scenes some twenty years later in the likes of Fury, Brad Pitt is a man dedicated to looking his best on screen, despite nearing 60.

As Pitt himself joked in his 2020 Golden Globes’s speech for best supporting actor for Once Upon a Time in Hollywood (in which he of course appears shirtless): “Let’s be honest, it was a difficult part: a guy who gets high, takes his shirt off, and doesn’t get on with his wife.”

But while Pit’s shredded Fight Club torso is credited with spawning a million gym memberships, it’s the 2004 historical epic, Troy that saw Pitt pack on the most muscle of his career, to take on the role of Achilles.

Playing a literal soldier of mythical proportions, it was obvious Pitt needed to get into the shape of his life. Enter Duffy Gaver, the no-nonsense former Navy Seal turned celebrity PT and author, who has worked with everyone from Chris Pratt to Tobey Maguire.

“Somebody said, ‘Hey Brad needs a trainer’, so I got put in touch with him through his people. We met and were off to the races,” Gaver explains over the phone, the shrug almost audible in his voice. Having faced war zones, Gaver wasn’t exactly awed by Pitt’s star wattage.

“I don’t think too much about that stuff,” he says. “He’s just a guy. I’d have the same conversations with him that I have with everybody: ‘You’re at point A, I have the map to get us to point B, but how much do you want it?’” 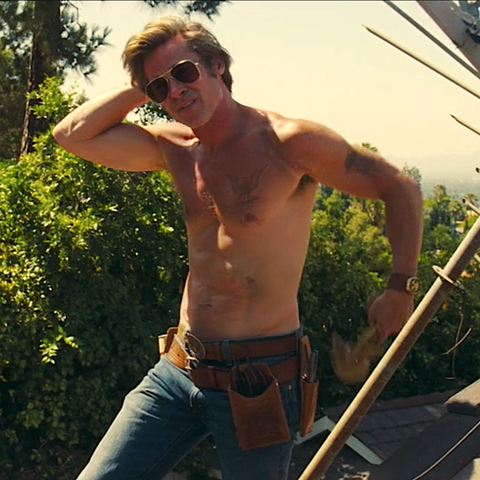 In order to play Achilles, Gaver knew that Pitt would have to pack on muscle (“Brad’s never had a problem leaning out, but the uphill battle was about putting size on him,” he says). Before taking the role, Pitt had dropped weight for a project than never started production, but he promised director Wolfgang Petersen that he’d bulk up to mythical proportions. He had six months.

Putting on muscle didn’t just mean getting as big as possible. It was vital to both Gaver and Pitt that his Achilles took cues from real-life warriors of the period.

“We talked about what is good aesthetically on the male body,” says Gaver. “If you look at Roman-Greco wrestlers they don’t go to the gym, they just do their job but they happen to look amazing. You don’t want the audience to go ‘Wow, I bet he benches a lot’. That doesn’t have anything to do with the film.”

Specifically, they wanted to avoid building an overly large chest. Not only would overdoing Pitt’s chest make his shoulders and arms look smaller, Gaver argued that Roman-Greco wrestlers had smaller chests, but a powerful back and arms, with most of their power coming from their posterior chain.

“Unless you’re in the NFL and need to carry more weight, there isn’t a lot of athleticism that comes out of a big chest,” he says.

The focus was put on building a solid back through a lot of pull-downs and dumbbell rows (amongst many other exercises). By the time Pitt and Gaver were filming on location in Malta, Pitt was completing dumbbell rows with 40 to 45 kilogram (about 88 to 99 pound) weights.

“If you really want to build a good physique, my take is you need a good thick back, decent shoulders and decent arms,” Gaver says. “And then you can worry about leaning out.” 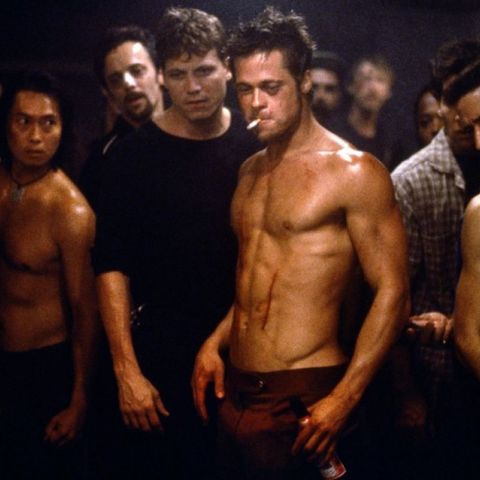 As might be expected from a former Navy Seal, Gaver favours a no bullshit, no frills approach to training. Put the work in, he argues, and results will come. It’s that simple.

“The fitness industry tries to make it seem complicated. Like ‘I have the answer and the other guy doesn’t.’ It’s a lie,” he enthuses. “If I say ‘Eat donuts or eat chicken’ what are you supposed to do? If I say ‘Train or take fucking five days off in a row’ do you sit on your ass or train?”

Straight away, Pitt endeared himself to Gaver. Instead of complaining after a difficult set, he doubled down, demonstrating his determination to the process.

“A lot of people say they want to be in shape, but it’s just bar-talk. The outcome is what you make of it,” says Gaver. “Early on, Brad had done a really hard set and I think ‘I hate you’ came out of his mouth. I said ‘Look, discomfort is where all the change takes place.’ He went over to get a grease pencil and he wrote that in big foot-high letters across the mirror. I thought, ‘He’s in’.”

As with any bulk up plan, nutrition was key. And unfortunately, there are no shortcuts here, either.

The good news is that Pitt’s Troy workout follows a classic bodybuilding framework; progressively overload your muscles through subsequent sets and you’ll get stronger and bigger. That’s it.

“When you look at Mr Olympia and he does ten different exercises just for his biceps, that’s because he’s been doing this his entire life,” Gaver continues. “He’s trying to milk just a little bit more growth out of his muscles. That’s not you. You are the infant going ‘Hey I’d like to have a bicep that even shows the fuck up’. Grab a bicep and do some curls. It’s no more complicated than that.”

With that in mind, this Mr Olympia-free workout will help you build a bigger back, adding shape and size to your physique as well as proper, Greek demigod strength.

Start off by getting blood into all the muscles that you’re about to hit hard. Work through each exercise in order with no rest, then take 60 seconds to grab some water after the squats before going to back into the push-ups, for three rounds total.

Get into a push-up position (obviously) with your palms flat on the floor beneath your chest, body braced straight and weight on your toes. Lower yourself slowly until your chest almost touches the floor, then drive back up explosively.

Grab a pull-up bar (or a tree branch, if you’ve not got one handy) with an overhand grip, hands shoulder-width apart. From a dead hang, lift yourself up until your chest is level with your hands, then slowly lower back into a dead hang. Can’t get to 10? Work to failure on each round.

Stand with your feet shoulder-width apart, toes turned slightly out, then push your hips back and lower your body as if sitting onto a chair. Keep your weight on your heels as you drop as far as possible (your thighs should be at least parallel to the ground at the bottom of the move), pause, then drive back up explosively.

This one’s all about weight and form – move as much of the former as you can without compromising the latter. Size comes through shifting as much metal as possible, but so do injuries, so build up to the big plates gradually. You’ll work through each move in order, resting for 30 seconds between sets. Try to keep rest periods tight to spike your metabolism and torch fat as you build muscle.

Sets: as many as possible

Reps: To overload your big back muscles, work in pyramid sets: start light, then build up, reducing the reps each time. “I go progressively heavier and heavier for sets of 20, 15, 12, 10, 8 reps,” explains Gaver. “I’ll go as low as four reps, just to get hims stronger and capable of moving more weight.”

Sit at a lat pull-down machine and grab the handle with an overhand grip (if you don’t have access to one right now, you can also perform this exercise with resistance bands). Brace your core then pull the bar to your chest, pause, and slowly return to the start position.

Sets: As many as you can

Reps: More pyramid sets. Follow the same format as the pull-downs to get your back used to pulling as much weight as possible.

Position a barbell on a landmine plate and straddle it, grasping it with both hands. Bend forward and brace your core, then row the weight up – your hands should finish at your navel. Pause, then slowly lower to the start position. If you don’t have a barbell, you can do this one with a pair of dumbbells or even a crate of books.

Rest: This one’s a superset with the rows – complete 10 push-ups, then go straight into 10 rows.

Rest: Take a 30-second breather after the rows, then go back into the push-ups and repeat the superset.

Grab a pair of heavy dumbbells and bend at the waist, holding them in front of you with straight arms. Explosively row them up, so the weight finishes at your hips. Imagine you’re squeezing a tennis ball between your shoulder blades at the top of the movement, then slowly lower and repeat.

Finish with some glute work on the hyperextension machine, or just on a flat bench. Lie face down, then squeeze your glutes and brace your abs as you lift your torso. Remember not to over-extend on the way up – that won’t do your back any favours. And, if you can’t manage to hold a weight plate after the rest of the workout, bodyweight is fine. Don’t be a hero. You’re not actually Achilles.