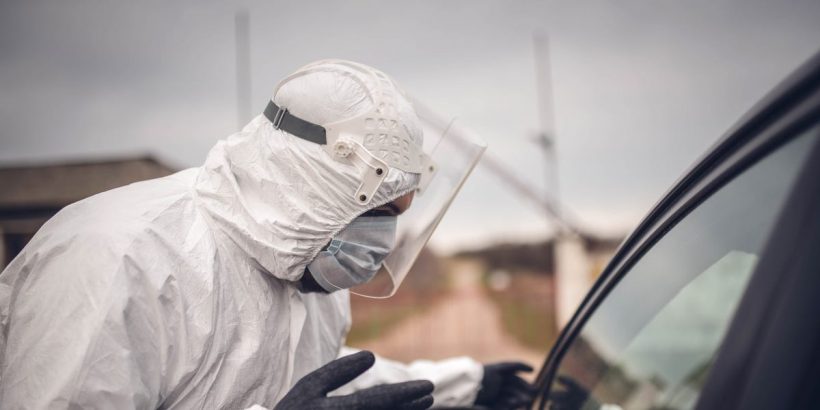 On March 26, a stay-at-home order was issued in the Navajo Nation, where there are 70 confirmed cases of the novel coronavirus.

Now, as in many places around the world, police are patrolling the streets, telling people to stay inside for at least two weeks. President Jonathan Nez is urging the 356,000 Navajo people to wash their hands and avoid physical interaction.

The virus could hit reservations hard. The Navajo-Hopi Observer reported that there are just 170 hospital beds, 13 ICU beds, 52 isolation rooms, and 28 ventilators in the 17 million-acre community, the largest land area retained by an indigenous people in the US. What's more, Native Americans have a higher prevalence towards diabetes, heart disease, and obesity.

But a stay-at-home order is not as simple for people on reservations as it might be in, say, New York City or Los Angeles.

"Folks on the nation don't have significant disposable income readily available to do the things that they would need to prepare for the two-week lockdown," Ethel Branch, former Navajo Nation attorney general, told Insider.

When Branch was at the grocery store, stocking up on soup, dry goods, and non-perishable meat to prepare for the lockdown, it occurred to her that for most people on the reservation, it would be difficult to do the same. Many would likely drive two or three hours to the grocery store in town, only to face empty shelves.

"I saw how difficult it was to buy high demand items, like toilet paper and protective equipment," she said.

"I felt like the government wouldn't be able to respond quickly, and definitely not at the individual family level. So I decided to fill a gap," Branch said. "I was thinking I would raise $500. Maybe $1,000. I was definitely not thinking I'd be raising over $150,000."

The money is going to be used to buy cough syrup, Tylenol, protective gear, and non-perishable food items, since at least 10% of people on the reservation don't have electricity. There will also be fresh fruits, vegetables and mutton, the meat of choice in Navajo Nation.

When the fundraiser took off, Branch realized she needed help and enlisted other Navajo women in organizing the fundraiser. Everything will be delivered via volunteers in trailers headed up to the reservations.

"We had no idea this was going to generate such a positive response," Branch said. "We are so incredibly, incredibly grateful."

A third of Navajo Nation has no access to running water, so many people can't wash their hands all the time

As COVID-19 spreads across America, experts say any communities that are under-resourced or underserved are going to be hit the hardest.

Some of those communities are Native American ones, like the Navajo Nation and Hopi reservations, many of whom lack the means to keep cleaning their hands as much as everyone is being told to. One 2019 poll found that 25% of Native Americans had trouble with the safety of their drinking water.

The CDC recommends people wash their hands for at least 20 seconds with clean running water in order to avoid getting infected with COVID-19, which does not have a vaccine in America.

"It's a particularly vulnerable community, with a third of the nation not having running water," said Branch. "The ability for people to wash their hands all the time is limited."

Overcrowding is a big problem

The CDC also recommends that anyone who is sick self-isolate from everyone in their household, using a separate bedroom and bathroom.

In Native American areas, estimates say overcrowding, which the World Health Organization defines as having more than 1.5 people per habitable room, affects 16% of the community. That's eight times the amount of overcrowded homes in the rest of America.

In a 2018 field hearing before the US Senate's Committee on Indian Affairs, representatives warned about the health risks of overcrowding.

"A human sneeze carries water droplets up to 15 feet from the source," they said. "In crowded homes, coughing and sneezing quickly spreads respiratory infections to an entire home with nowhere to hide."

With the coronavirus, which appears to be at least 10 times more deadly than the flu, overcrowding, lack of funding, and access to medical equipment could devastate the Navajo community.

People with pre-existing conditions, like diabetes and heart disease, which are both prevalent in the Indian community, have a higher risk of severe complications from COVID-19, according to the CDC. That means they need to be even more wary about going outside and possibly getting infected.

"When you're talking about vulnerable populations, yes, it's our elders, it's also people with diabetes, it's also people with cardiovascular disease, immunocompromised systems. If you put that profile up, that's Indian country," Stacy Bohlen, CEO of the National Indian Health Board, said in a webinar organized by Indigenous Rising Media on March 20.

"That's my cousin, that's my aunties, that's my uncles," moderator Dallas Goldtooth said in response. "Entire communities are in the danger zone for what you're dealing with."

Then there are all the uranium mines on the reservation, which makes the incidence of cancer in the community disproportionately high, and the lack of facilities and medical equipment.

The Indian hospital system is not prepared

"Our hospitals are 40 years old in the Indian health system. The equipment is two times older than it is any other place," Bohlen said. "We're not prepared."

Over 100 years ago, when tribal nations signed treaties giving away their land, what was to become the United States made a "promise of all proper care and protection" in exchange. Ultimately, that amounted to The Indian Health Service, which was created by the government to provide healthcare for Indian people. It has been underfunded since its inception.

In 1914, a commissioner for the Bureau of Indian Affairs, said that "it is incomprehensible to me that appropriations for combating disease are so meager." Over 100 years later, Bohlen is repeating the sentiment.

Congress agreed to allocate $40 million to tribes — but they still haven't got the funds, and they don't know when they will

As the Senate worked on a $2 trillion dollar stimulus package, meant to offset the economic effects of social distancing, Native leaders fought to make sure they weren't left out. Congress agreed to allocate $40 million to tribes, but Bohlen says the money is mired in a maze of bureaucratic complications.

"The 40 million original [funds]? Not out the door yet," Bohlen said. "And we can't get a straight answer on how to get it."

Hospitality, land use, and tourism are many native communities' main source of income. But with most tribal casinos closed and swarms of people headed to the national parks near the reservations, tribal elders and health experts are afraid COVID-19 could deal a crippling blow to the Indian community.

For now, Branch hopes the GoFundMe will provide something of a safety net.

"I felt like the government wouldn't be able to respond quickly, and definitely not at the individual family level," Branch said. "So hopefully we would be able to fill a gap. I certainly wasn't thinking at the scale that it ended up being!"

Do you have a personal experience with the coronavirus you’d like to share? Or a tip on how your town or community is handling the pandemic? Please email [email protected] and tell us your story.