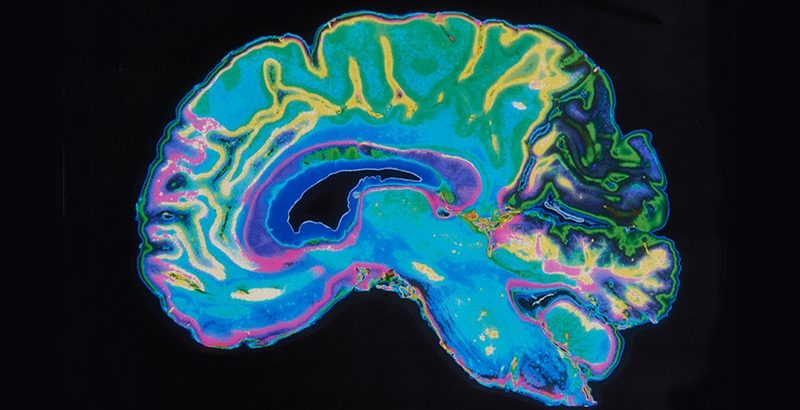 Google the word “dopamine” and you will learn that its nicknames are the “happy hormone” and the “pleasure molecule” and that it is among the most important chemicals in our brains. With The Guardian branding it “the Kim Kardashian of neurotransmitters,” dopamine has become a true pop-science darling — people across the globe have attempted to boost their mood with dopamine fasts and dopamine dressing.

A century ago, however, newly discovered dopamine was seen as an uninspiring chemical, nothing more than a precursor of noradrenaline. It took several stubborn and hardworking scientists to change that view.

When Casimir Funk, a Polish biochemist and the discoverer of vitamins, first synthesized the dopamine precursor levodopa in 1911, he had no idea how important the molecule would prove to be in pharmacology and neurobiology. Nor did Markus Guggenheim, a Swiss biochemist, who isolated levodopa in 1913 from the seeds of a broad bean, Vicia faba. Guggenheim administered 1 g of levodopa to a rabbit, with no apparent negative consequences. He then prepared a larger dose (2.5 g) and tested it on himself. “Ten minutes after taking it, I felt very nauseous, I had to vomit twice,” he wrote in his paper. In the body, levodopa is converted into dopamine, which may act as an emetic — an effect Guggenheim didn’t understand. He simply abandoned his human study, erroneously concluding, on the basis of his animal research, that levodopa is “pharmacologically fairly indifferent.”

Around the same time, several scientists across Europe successfully synthesized dopamine, but those discoveries were shelved without much fanfare. For the next three decades, dopamine and levodopa were pushed into academic obscurity. Just before World War II, a group of German scientists showed that levodopa is metabolized to dopamine in the body, while another German researcher, Hermann Blaschko, discovered that dopamine is an intermediary in the synthesis of noradrenaline. Even these findings, however, were not immediately accepted. 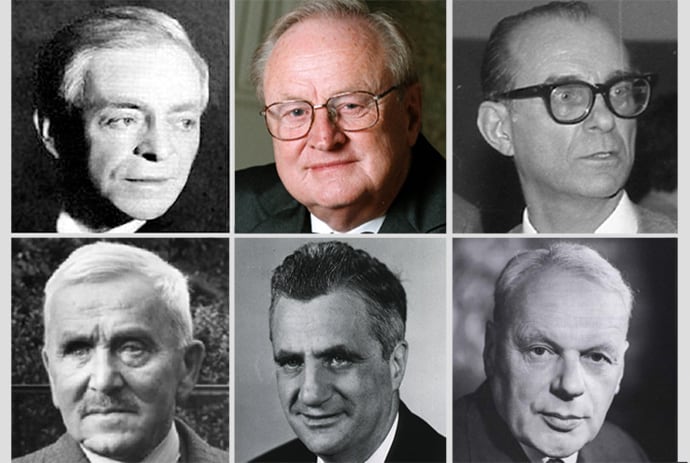 The dopamine story picked up pace in the post-war years with the observation that the hormone was present in various tissues and body fluids, although nowhere as abundantly as in the central nervous system. Intrigued, Blaschko, who (after escaping Nazi Germany, changing his name to Hugh, and starting work at Oxford University) hypothesized that dopamine couldn’t be an unremarkable precursor of noradrenaline — it had to have some physiologic functions of its own. He asked his postdoctoral fellow, Oheh Hornykiewicz, to test a few ideas. Hornykiewicz soon confirmed that dopamine lowered blood pressure in guinea pigs, proving that dopamine indeed had physiologic activity that was independent of other catecholamines.

While Blaschko and Hornykiewicz were puzzling over dopamine’s physiologic role in the body, across the ocean at the National Heart Institute in Maryland, pharmacologist Bernard Brodie and colleagues were laying the groundwork for the discovery of dopamine’s starring role in the brain.

Spoiler alert: Brodie’s work showed that a new psychiatric drug known as reserpine was capable of fully depleting the brain’s stores of serotonin and ― of greatest significance, as it turned out — mimicking the neuromuscular symptoms typical of Parkinson’s disease. The connection to dopamine would be made by new lab colleague Arvid Carlsson, who would go on to win a Nobel Prize.

Derived from Rauwolfia serpentina (a plant that for centuries has been used in India for the treatment of mental illness, insomnia, and snake bites), reserpine was introduced in the West as a treatment for schizophrenia.

It worked marvels. In 1954, the press lauded the “dramatic” and seemingly “incredible” results in treating “hopelessly insane patients.” Reserpine had a downside, however. Reports soon changed in tone regarding the drug’s severe side effects, including headaches, dizziness, vomiting, and, far more disturbingly, symptoms mimicking Parkinson’s disease, from muscular rigidity to tremors.

Brodie observed that when reserpine was injected, animals became completely immobile. Serotonin nearly vanished from their brains, but bizarrely, drugs that spur serotonin production did not reverse the rabbits’ immobility.

Carlsson realized that other catecholamines must be involved in reserpine’s side effects, and he began to search for the culprits. He moved back to his native Sweden and ordered a spectrophotofluorimeter. In one of his experiments, Carlsson injected a pair of rabbits with reserpine, which caused the animals to become catatonic with flattened ears. After the researchers injected the animals with levodopa, within 15 minutes, the rabbits were hopping around, ears proudly vertical. “We were just as excited as the rabbits,” Carlsson later recalled in a 2016 interview. Carlsson realized that, because there was no noradrenaline in the rabbits’ brains, dopamine depletion must have been directly responsible for producing reserpine’s motor inhibitory effects. 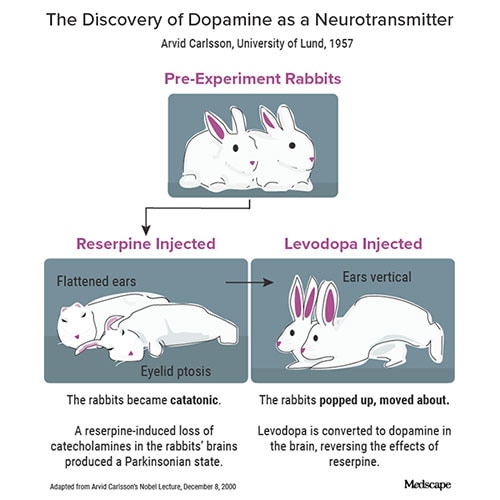 In 1960, however, the medical community was not yet ready to accept that dopamine was anything but a boring intermediate between levodopa and noradrenaline. At a prestigious London symposium, Carlsson and his two colleagues presented their hypothesis that dopamine may be a neurotransmitter, thus implicating it in Parkinson’s disease. They were met with harsh criticism. Some of the experts said levodopa was nothing more than a poison. Carlsson later recalled facing “a profound and nearly unanimous skepticism regarding our points of view.”

That would soon change. Hornykiewicz, the biochemist who had earlier discovered dopamine’s blood pressure–lowering effects, tested Carlsson’s ideas using the postmortem brains of Parkinson’s disease patients. It appeared Carlsson was right: unlike in healthy brains, the striatum of patients with Parkinson’s disease contained almost no dopamine whatsoever. Beginning in 1961, in collaboration with neurologist Walther Birkmayer, Hornykiewicz injected levodopa into 20 patients with Parkinson’s disease and observed a “miraculous” (albeit temporary) amelioration of rigidity, motionlessness, and speechlessness.

By the late 1960s, levodopa and dopamine were making headlines. A 1969 New York Times article described similar stunning improvements in patients with Parkinson’s disease who were treated with levodopa. A patient who had arrived at a hospital unable to speak, with hands clenched and rigid expression, was suddenly able to stride into his doctor’s office and even jog around. “I might say I’m a human being,” he told reporters. Although the treatment was expensive — equivalent to $210 in 2022 — physicians were deluged with requests for “dopa.” To this day, levodopa remains a gold standard in the treatment of Parkinson’s disease.

The history of dopamine, however, is not only about Parkinson’s disease but extends to the treatment of schizophrenia and addiction. When in  the1940s a French military surgeon started giving a new antihistamine drug, promethazine, to prevent shock in soldiers undergoing surgery, he noticed a bizarre side effect: the soldiers would become euphoric yet oddly calm at the same time.

After the drug was modified by adding a chlorine atom and renamed chlorpromazine, it fast became a go-to treatment for psychosis. At the time, no one made the connection to dopamine. Contemporary doctors believed that it calmed people by lowering body temperature (common treatments for mental illness back in the day included swaddling patients in cold, wet sheets). Yet just like reserpine, chlorpromazine produced range of nasty side effects that closely mimicked Parkinson’s disease. This led a Dutch pharmacologist, Jacques van Rossum, to hypothesize that dopamine receptor blockade could explain chlorpromazine’s antipsychotic effects — an idea that remains widely accepted today.

In the 1970s, dopamine was linked with addiction through research on rodents, and this novel idea caught people’s imagination over the coming decades. A story on dopamine titled, “How We Get Addicted,” made the cover of Time in 1997. 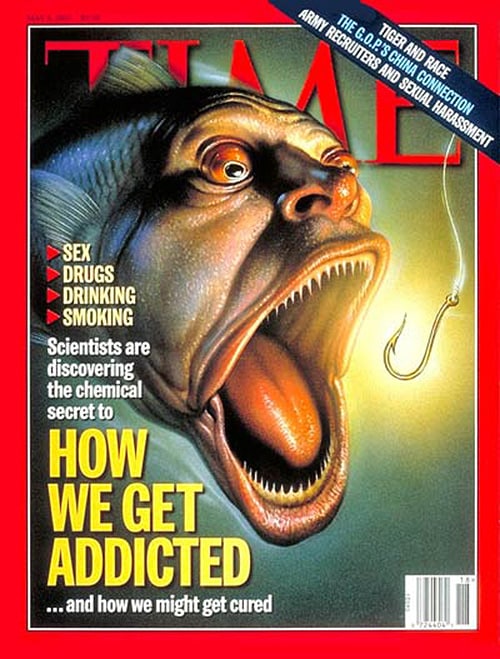 Yet as the dopamine/addiction connection became widespread, it also became oversimplified. According to a 2015 article in Nature Reviews Neuroscience, a wave of low-quality research followed — nonreplicated, insufficient — which led the authors to conclude that we are “addicted to the dopamine theory of addiction.” Just about every pleasure under the sun was being attributed to dopamine, from eating delicious foods and playing computer games to sex, music, and hot showers. As recent science shows, however, dopamine is not simply about pleasure — it’s about reward prediction, response to stress, memory, learning, and even the functioning of the immune system. Since its first synthesis in the early 20th century, dopamine has often been misunderstood and oversimplified — and it seems the story is repeating itself now.

In one of his final interviews, Carlsson, who passed away in 2018 at the age of 95, warned about playing around with dopamine and, in particular, prescribing drugs that have an inhibitory action on this neurotransmitter. “Dopamine is involved in everything that happens in our brains ― all its important functions,” he said.

We should be careful how we handle such a delicate and still little-known system.