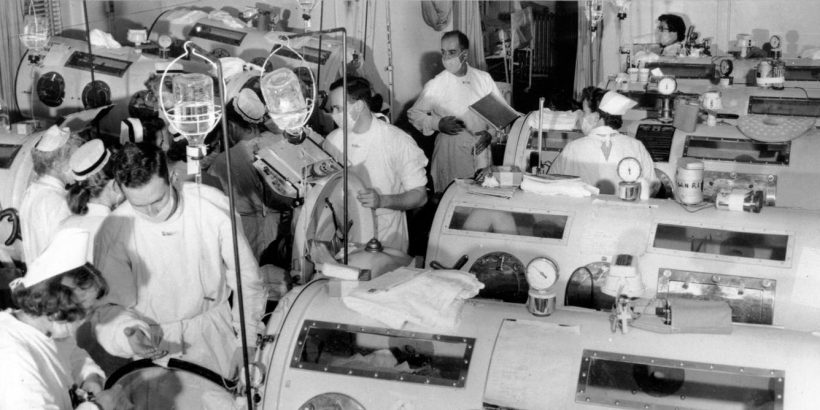 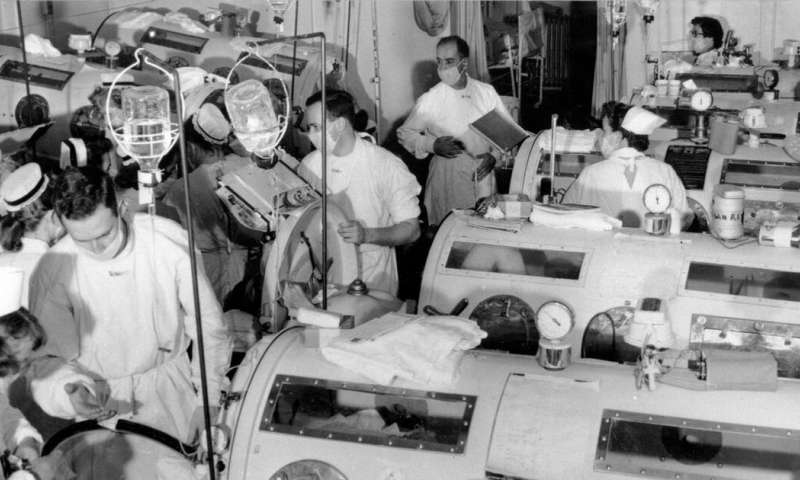 The fear and uncertainty surrounding the coronavirus pandemic may feel new to many of us. But it is strangely familiar to those who lived through the polio epidemic of the last century.

Like a horror movie, throughout the first half of the 20th century, the polio virus arrived each summer, striking without warning. No one knew how polio was transmitted or what caused it. There were wild theories that the virus spread from imported bananas or stray cats. There was no known cure or vaccine.

For the next four decades, swimming pools and movie theaters closed during polio seasonfor fear of this invisible enemy. Parents stopped sending their children to playgrounds or birthday parties for fear they would “catch polio.”

In the outbreak of 1916, health workers in New York City would physically remove children from their homes or playgrounds if they suspected they might be infected. Kids, who seemed to be targeted by the disease, were taken from their families and isolated in sanitariums.

In 1952, the number of polio cases in the U.S. peaked at 57,879, resulting in 3,145 deaths. Those who survived this highly infectious disease could end up with some form of paralysis, forcing them to use crutches, wheelchairs or to be put into an iron lung, a large tank respirator that would pull air in and out of the lungs, allowing them to breathe.

Ultimately, poliomyelitis was conquered in 1955 by a vaccine developed by Jonas Salk and his team at the University of Pittsburgh.

In conjunction with the 50th anniversary celebration of the polio vaccine, I produced a documentary, “The Shot Felt “Round the World,” that told the stories of the many people who worked alongside Salk in the lab and participated in vaccine trials. As a filmmaker and senior lecturer at the University of Pittsburgh, I believe these stories provide hope in the fight to combat another unseen enemy, coronavirus.

Pulling together as a nation

Before a vaccine was available, polio caused more than 15,000 cases of paralysis a year in the U.S. It was the most feared disease of the 20th century. With the success of the polio vaccine, Jonas Salk, 39, became one of the most celebrated scientists in the world. 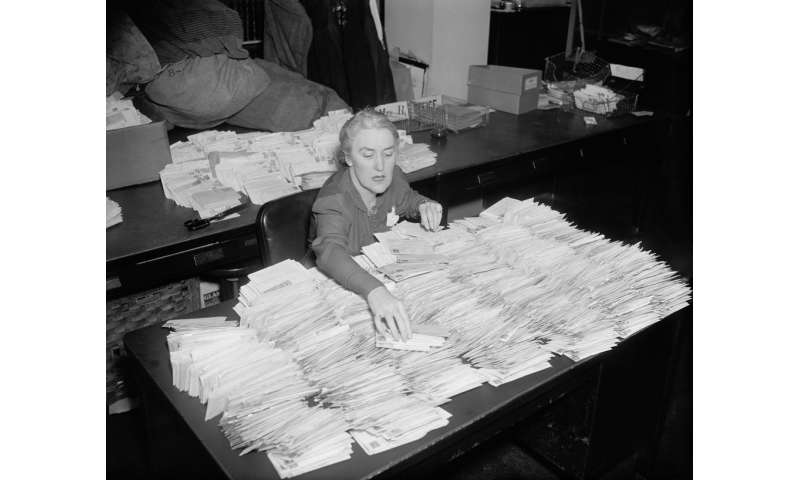 He refused a patent for his work, saying the vaccine belonged to the people and that to patent it would be like “patenting the Sun.” Leading drug manufacturers made the vaccine available, and more than 400 million doses were distributed between 1955 and 1962, reducing the cases of polio by 90%. By the end of the century, the polio scare had become a faint memory.

Developing the vaccine was a collective effort, from national leadership by President Franklin Roosevelt to those who worked alongside Salk in the lab and the volunteers who rolled up their sleeves to be experimentally inoculated.

Sidney Busis, a young physician at the time, performed tracheotomies on two-year-old children, making an incision in their necks and enclosing them in iron lung to artificially sustain their breathing. His wife Sylvia was terrified that he would transmit polio to their two young sons when he came home at night.

In the Salk lab, a graduate student, Ethyl “Mickey” Bailey, pipetted by mouth—pulling liquid up thin glass tubes—live polio virus as part of the research process.

My own neighbor, Martha Hunter, was in grade school when her parents volunteered her for “the shot,” the experimental Salk vaccine that no one knew if it would work.

President Roosevelt, who kept his own paralysis from polio hidden from the public, organized the nonprofit National Institute of Infant Paralysis, later known as the March of Dimes. He encouraged every American to send dimes to the White House to support treating polio victims and researching a cure. In the process, he changed American philanthropy, which had been largely the domain of the wealthy.

That was a time, said Salk’s oldest son, Dr. Peter Salk, in an interview for our film, when the public trusted the medical community and believed in each other. I believe that’s an idea we need to resurrect today.

What it took to end polio

Jonas Salk was 33 when he began his medical research in a basement lab at the University of Pittsburgh. He had wanted to work on influenza but switched to polio, an area where research funding was more available. Three floors above his lab was a polio ward filled to capacity with adults and children in iron lungs and rocking beds to help them breathe.

There were many false leads and dead ends in pursuing remedies. Even President Roosevelt traveled to Warm Springs, Georgia, believing that the water there might have curative effects. While most in the scientific community believed that a live polio virus vaccine was the answer, Salk went against medical orthodoxy.

He pursued a killed virus vaccine, trying it first on cells in the lab, then monkeys and, next, young people who already had polio. There were no guarantees this would work. Ten years earlier, a different polio vaccine had inadvertently given kids polio, killing nine of them.

In 1953, Salk was given permission to test the vaccine on healthy children and began with his three sons, followed by a vaccination pilot study of 7,500 children in local Pittsburgh schools. While the results were positive, the vaccine still needed to be tested more widely to gain approval.

In 1954, the March of Dimes organized a national field trial of 1.8 million schoolchildren, the largest medical study in history. The data was processed and on April 12, 1955, six years from when Salk began his research, the Salk polio vaccine was declared “safe and effective.” Church bells rang and newspapers across the world claimed “Victory Over Polio.”

In adapting our documentary for broadcast on the Smithsonian Channel, we interviewed Bill Gates, who explained why the Bill and Melinda Gates Foundation had made eradicating polio worldwide a top priority.

Vaccines, he said, have saved millions of lives. He joined the World Health Organization, UNICEF, Rotary International and others to help finish the job started by the Salk vaccine, eradicating polio in the world. This accomplishment will free up resources that will no longer have to be spent on the disease.

Up until now, smallpox is the only infectious disease we have ever eliminated. But the global infrastructure that the polio eradication effort has put in place is helping to fight other infectious diseases also, such as Ebola, malaria and now coronavirus. On Feb. 5, 2020, the Bill & Melinda Gates Foundation announced it would provide US$100 million to improve detection, isolation and treatment efforts and accelerate the development of a vaccine for the coronavirus.

These are frightening times as the coronavirus spreads in ways reminiscent of poliomyelitis. It’s instructive to remember what it took to nearly eradicate polio and a reminder of what we can do when faced with a common enemy. On Oct. 24, 2019, World Polio Day, WHO announced there were only 94 cases of wild polio in the world. The success of the polio vaccine launched a series of vaccines that negated many of the effects of infectious disease for the second half of the 20th century.