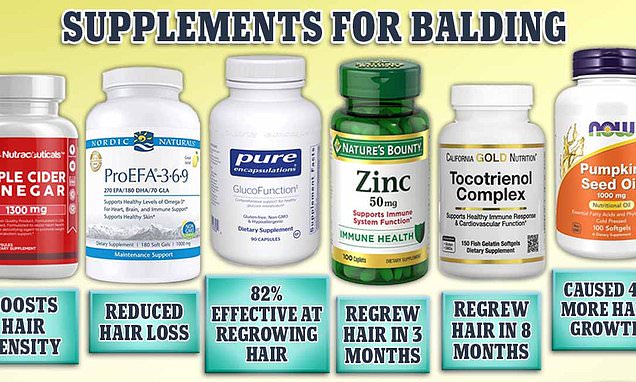 Expensive hair transplants to counter baldness have rocketed in popularity recently — but research shows that cheaper store-bought supplements could do the trick.

A review found over-the-counter pills such as zinc, pumpkin seed oil, and probiotics help thicken, retain or regrow hair in up to 93 percent of men. Omega oil supplements, apple cider vinegar and hair growth vitamins were also found to have some benefit.

These findings could be a dent in the $5billion hair transplant industry, where many men pay upwards of $10,000 and risk bleeding, scarring and infection to reinvigorate their head of hair.

It comes after Japanese scientists successfully generated hair follicles in petri dishes using embryonic skin cells from mice — in a potential breakthrough in the search for a cure for baldness. 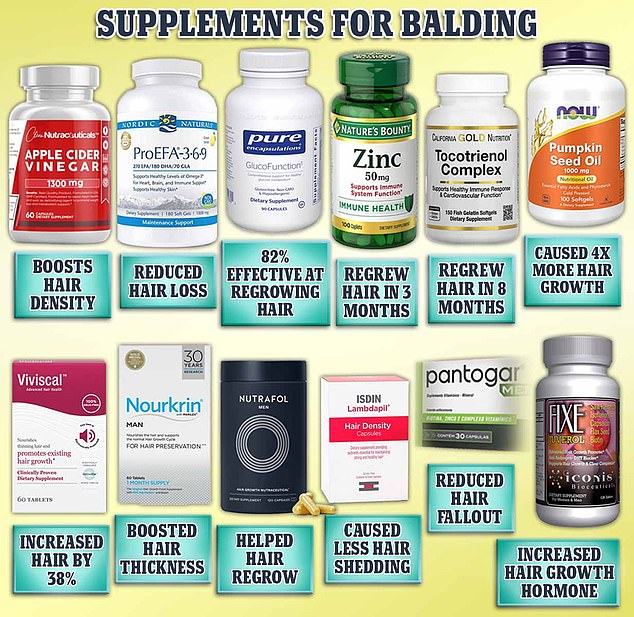 A review found over-the-counter pills like zinc, pumpkin seed oil, and probiotics help thicken, retain or regrow hair in up to 93 percent of men. Omega oil supplements, apple cider vinegar and hair growth vitamins were also found to have some benefit

Hundreds of thousands of people may one day benefit from a drug that can cure baldness in months.

Hair loss affects roughly 80million men and women in the US – though it is much more common in men. The issue worsens and becomes more common with age.

By age 35, about 40 percent of men suffer from visible hair loss. This percentage jumps to 65 by age 60.

Scientists from Boston and Miami parsed through 30 studies that looked at the effects of supplements on baldness.

The studies combined to look at more than a dozen over-the-counter products that are believed to be effective against hair loss.

But it also included drugs such as: Viviscal, Nourkrin, Nutrafol, Lambdapil, Pantogar, Capsaicin and isoflavone.

Other treatments like kimchi and cheonggukjang, vitamin D3, and Forti5 that have shown some promise but are considered ‘low quality’ were also included in the study.

These supplements often contain nutrients, vitamins and proteins that strengthen the hair and prevent it follicles from breaking or going inactive.

There are several hair loss conditions that affect millions of Americans.

Androgenetic alopecia is the most common, impacting more than 50million men and 30million women and can worsen with age.

It is also commonly referred to as male pattern baldness.

Telogen effluvium is stress-induced hair loss that is often temporary.

Alopecia areata is an autoimmune disease that causes patchy baldness. It can occur just about anywhere on the body.

The most common treatment for alopecia areata is corticosteroids that suppress the immune system – and prevent it from causing hair shed.

Many supplements billed as hair regrowth agents have been written off as snake oils, forcing many people dealing with hair loss to resort to medications or procedures.

The follicles hold hair in place, so when they are damaged the hair starts to fall out.

It usually causes circle or oval-shaped patches of baldness and can lead to someone becoming completely hairless.

The disease can occur at any time in life and is unpredictable, with experts still uncertain what in a genetic makeup causes it.

Genes inherited from either parent cause the follicles to shrink over time and eventually stop growing hair.

It can start in teenage years but is more common in later life.

It is not caused by an immune response and therefore is not affected by drugs aiming to suppress the body’s defense system.

People experiencing baldness may also take minoxidil, known as Rogaine, which is put on the scalp and can reactivate inactive hair follicles.

People can also opt for costly hair transplants, derisively referred to as ‘hair plugs’, which rely on taking healthy hair follicles from one area of the head and moving them to balding areas.

A transplant can cost anywhere between $4,000 to $15,000 and these procedures will rarely be covered by a person’s health insurance.

Supplements are far more affordable and, while not quick fixes, have been shown to curtail hair loss and even help regrow hair.

A probiotic made from kimchi and cheonggukjang showed improved hair thickness in 93 percent of patients at four months in one study.

But authors note that the study was limited in its small sample size and lack of a control group.

In a double-blind study of 55 people, those taking Nourkrin, another over-the-counter drug, for six months saw an average hair growth increase of more than 37 percent compared to less than 2 percent in the placebo group.

The experts also considered Nutrafol, a supplement that has become very popular in the US. It helped women regrow hair in as little as two months with no adverse effects reported.

People who used Pantogar for three to six months saw a reduced number of hairs falling out daily. Capsaicin and isoflavone users have also shown an increase in the production of the hormone dermal IGF-1 that is involved in hair growth.

A 2015 study showed that nearly 90 per cent of test subjects who took supplements of omega 3 and 6 with antioxidants for six months reported a reduction in hair loss.

Apple nutraceutical, meanwhile helped subjects increase hair growth by 118 per cent, hair weight by 37 per cent, and keratin content by 35 per cent in two months.

Total glucosides of paeony and compound glycyrrhizin tablets were 82 per cent effective at curing or at least improving hair loss.

Of 37 people who took zinc supplements, 22 saw complete hair regrowth by the end of the third month.

Pumpkin seed oil was also effective in promoting hair regrowth. In one study, 76 men with hair loss took 400 mg of pumpkin seed oil or a placebo per day for 24 weeks.

Hair loss affects roughly 80 million men and women in the US annually. Men have a higher liklihood of going bald than women, and the risk increases with age. About 30 per cent to 50 per cent of men will experience male pattern baldness by the age of 50

Those who took pumpkin seed oil reported higher scores in hair loss improvements and had four times more hair growth than those in the control group.

All of the supplements considered in the report had mild to no side effects.

While each one showed some benefit for people suffering from baldness, people are strongly advised against taking all of the supplements at once.

Too much of a dietary supplement can leave you feeling nauseous, weak, constipated, and dizzy. Any ingredient in a vitamin supplement can be toxic in large amounts.

Despite its widespread impact, there is no cure for baldness, though there are medications for the condition that have received Food and Drug Administration (FDA) approval.

The agency approved alopecia drug Olumianta in June after it boosted hair on the scalp by a third for clinical trial participants.

The FDA has also approved Rogaine, an over-the-counter solution that has been shown to help roughly 50 percent of men with male pattern baldness.

Another treatment, Propecia, is an oral medication that blocks the actions of the hormone responsible for hair loss.

The agency does not have the authority to screen supplements before they hit the US market, so any claim made on packaging should be taken with a grain of salt.

Some experts warn against using untested supplements as their benefits are sometimes minimal – proving them to be a waste of time and money.