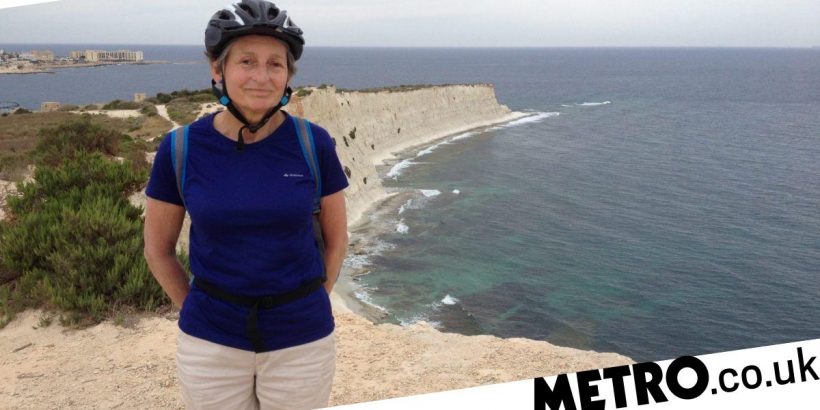 Doreen was diagnosed with stage 4 lung cancer four years ago – there is no cure.

The cancer had already spread to Doreen’s brain by the time it was detected, but the 70-year-old has taken the diagnosis in her stride, literally.

A passionate long-distance walker, Doreen feels grateful that she is still able to keep active and says that walking is a powerful tool to keep her mind on the here-and-now.

‘My biggest achievement in walking was doing the Camino de Santiago, 495 miles through northern Spain over three trips. My longest walk before that had been only 10 miles,’ Doreen tells Metro.co.uk.

‘Since my diagnosis, I’ve done three more Caminos. I am so fortunate the cancer hasn’t affected my walking at all.’

Doreen completed the Camino Ingles from A Coruna in north-west Spain to Santiago in May 2017, which is 46 miles, followed by Santiago to Finisterre, which is 54 miles.

In March 2019, she walked the Camino Portuguese from Porto, which was 149 miles.

‘I’ve done other long-distance walks too since my diagnosis,’ she adds. ‘The Cleveland Way in Yorkshire 2017, and Hadrian’s Wall Path in 2019.’

Doreen never really had any symptoms before finding out she had lung cancer, just a very slight occasional but persistent cough for more than a year.

She went to her GP in December 2015 and had an x-ray, which was clean. She was referred to a respiratory physician who ordered a CT scan.

‘The scan showed a suspicious lesion, and more tests confirmed cancer in my lower right lung (May 2016). They also found seven metastases in my brain and that makes me Stage 4,’ says Doreen.

‘I was amazed as I felt so well and I had never smoked.’

Doreen’s father had lung cancer in the 1970s and survived for another 10 years so Doreen, being ‘optimistic by nature’, assumed that current treatment would be greatly advanced by now and give her a good lease of life.

‘I can’t really explain why, but I felt a sense of gratitude at being 65 and able to look back on a pretty good life, and if I could make it to 75 that would ok,’ she explains.

‘I’ve always been completely healthy, and nothing has really changed in my life.

‘I have ALK Positive lung cancer, which is only 5% of all lung cancers, but this can be treated (although not cured) with a targeted therapy.

‘Charities like The Institute of Cancer Research have made huge progress developing kinder, targeted treatments with fewer side effects, and so cancer is just part of my life now. I take it in my stride.’

Doreen got into walking around 10 years ago. Now, she walks with a friend, in a group, or sometimes just on her own.

‘It keeps me fit, puts me in a good frame of mind and I’m always learning something. I also love travelling, cycling and camping – all for pretty much the same reasons.’

Doreen says that being on targeted treatment has kept her fit, healthy and mostly symptom-free, which she is incredibly grateful for.

‘I do get slight swelling in my ankles, but this goes once I put my feet up.

‘When I was diagnosed they found brain metastases which meant I was not allowed to drive and also, initially, not to cycle. To make up for the lack of exercise I took up yoga and Pilates which for me is great body maintenance. This adds another dimension to my fitness and wellbeing.

‘I don’t think I’ve changed the way I think about my body, but I feel I owe it to myself to stay strong and healthy with a good diet and exercise so that I can cope with treatments and changes.’

Despite the overwhelming positivity, Doreen knows that her condition has no cure and that one day it might catch up with her. She says she does think about the future occassionally, but she doesn’t tend to dwell on it.

‘Of course, there will be progression,’ she says. ‘I’m not really sure what to expect, how it will be, or how I will feel. It’s not something I’ve looked into.

‘Because I currently feel so well, I tend to forget I’ve got cancer. Perhaps when my situation changes I’ll sense the clock ticking and I’ll feel different.

‘Right now, I’m very much living in the present. The future doesn’t mean much to me.’

She says the Facebook ALK Positive support group has been an amazing source of courage and comfort for her – meeting up with other people living with her condition has been a real lifeline for Doreen.

‘Many members share their feelings and health issues,’ she says. ‘Sadly, four of the members I knew have died in the last year. One was a young mother.

‘My heart really goes out to them and their families. These are the times when I remember my future.

‘My life will be shortened but then I think, well I’m nearly 70 and have had a great life.’

Doreen doesn’t think of herself as a ‘strong woman’. She says her positivity is all about a simple adjustment of her mindset.

‘I know women who have experienced terrible traumas but come up fighting and determined,’ she tells us.

‘I have met other women with cancer who are experiencing difficult symptoms and treatment, but their determination remains, and other women who struggle. They are strong women.

‘I am positive and optimistic. That is my strength.’

Strong Women is a weekly series that champions diversity in the world of sport and fitness.

A Sport England study found that 40% of women were avoiding physical activity due to a fear of judgement.

But, contrary to the limited images we so often see, women of any age, size, race or ability can be active and enjoy sport and fitness.

We hope that by normalising diverse depictions of women who are fit, strong and love their bodies, we will empower all women to shed their self-consciousness when it comes to getting active.

Each week we talk to women who are redefining what it means to be strong and achieving incredible things.