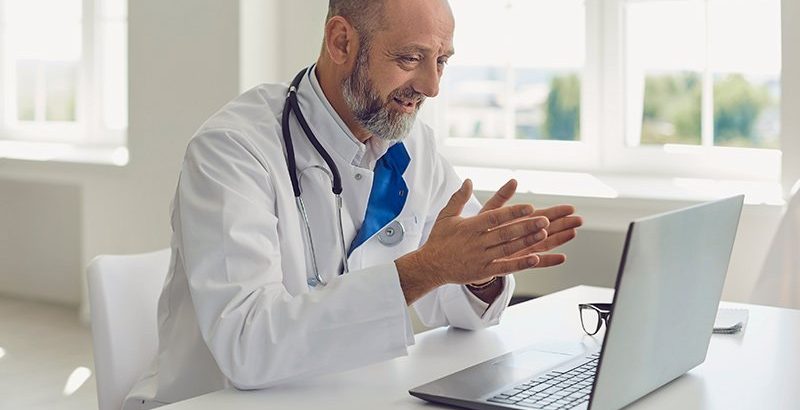 Remote interventions using an Internet-based app and telephone outreach to engage patients with osteoarthritis to self-manage their disease have demonstrated the potential to improve some symptoms, at least in the short term, showing the potential for tools to interact with OA patients without having them come into an office or clinic.

Remote interaction using these two forms of telemedicine — one a sophisticated digital platform, the other using a device that’s been around for almost 150 years — may have greater utility for keeping physicians connected with their OA patients during the COVID-19 pandemic, OA experts said in an interview.

“This is certainly relevant during the pandemic, but this has been of high interest for years as well, as researchers and clinicians have been seeking the best ways to reach patients with these types of programs,” said Kelli Allen, PhD, a research health scientist at the University of North Carolina at Chapel Hill.

Two separate studies evaluated the telemedicine platforms. In JAMA Internal Medicine, researchers reported that telephone-based cognitive-behavioral therapy (CBT) for patients aged 60 and older with OA and insomnia led to improved sleep, fatigue and, to a lesser extent, pain, in a randomized, controlled trial with 327 patients.

A separate randomized, controlled trial of 105 OA patients at the University of Nottingham (England), published in JAMA Network Open, reported that users of a smartphone-based exercise intervention app had greater improvements in pain and function than did controls.

“I think these two studies represent a first step in terms of moving forward, and certainly the interventions could be refined and potentially combined together for patients in the future,” said C. Kent Kwoh, MD, director of the University of Arizona Arthritis Center in Tucson.

That variation between the intervention group and controls was sustained out to a year: 7.7 points lower than baseline versus 4.7 points lower. At the same time point, 56.3% of the CBT group remained in remission with Insomnia Severity Index scores less than 7 versus 25.8% of controls. Fatigue outcomes were similarly disparate between the groups.

Pain outcomes were a different story, however. “Post treatment, significant differences were observed for pain, but these differences were not sustained at 12-month follow-up,” first author Susan M. McCurry, PhD, a clinical psychologist and faculty member at the University of Washington, Seattle, and colleagues wrote.

“I think their positive findings illustrate that remotely delivered interventions can be ‘low tech’ and still effective,” Allen said of the CBT phone study. She noted that complete case data were available for 282 of 327 patients. “The high rate of session attendance suggests that they chose a delivery modality appropriate for their target patient group.”

The scalability of the telephone model is noteworthy, Kwoh said. “Having a telemedicine intervention that could be scaled a little more easily rather than an in-person intervention, and having individualized treatment, that’s beneficial, as is targeting two symptoms that are very bothersome and burdensome to patients with OA: insomnia and fatigue.” Following patients out to 12 months is a strength of the study, he added.

The U.K. study evaluated 6-week outcomes of 48 patients with knee OA who used a proprietary app-based exercise program (Joint Academy) and 57 controls who used traditional self-management. The app provided daily exercises and texts, along with email and smartphone reminders. The app was derived from the Better Management of Patients with OA program initiated in Sweden in 2008 that used OA treatment guidelines for education and exercise in person in primary care clinics.

App users showed a 1.5-point reduction in numeric rating scale (NRS) pain score at 6 weeks versus virtually no change in controls (P < .001). In terms of secondary outcomes, pain scores improved 2.2 points on average for app users versus 1.2 for controls (P = .02), with similar improvements recorded in both stiffness and physical function.

Average change in the 30-second sit-to-stand test measured 4.5 for the app users and 1.2 for the usual-care group (P < .001). The study found no difference between the two groups in changes in temporal summation, conditional pain modulation, or Arthritis Research UK Musculoskeletal Health Questionnaire scores.

First author Sameer Akram Gohir, MSc, PhD, and colleagues wrote that the reasons for differences in outcomes between app users and controls aren’t clear. “The superior outcome in the intervention group may depend on the content and context in the app, including a combination of standardized exercises and information, as well as using a digital delivery system.”

Data gathering was cut short because of COVID-19 restrictions in the United Kingdom, as 27 patients missed their in-person follow-up visits. That was one shortcoming of the study, Kwoh noted.

“Given the caveats certainly they were able to show robust changes in terms of decreased pain, and also improvement in a variety of performance measures. Certainly this may be beneficial – we don’t know – in terms of cost-effectiveness, but it may be beneficial for insurance companies to adapt such a program,” he said, adding that future studies into the cost effectiveness of the digital platform would be in order.

“Certainly, if this program were to decrease physician visits or postpone the need for joint replacement for individuals, then it could be certainly very cost effective,” Kwoh said.

The completion rate among patients in the study – almost 90% – was “impressive,” Allen said. “However, this is a relatively short-term study, and I think an important question for future research is whether patients continue with this level of engagement for a longer period of time.”

A coauthor reported a financial relationships with Pfizer. Kwoh said that in the past year he has consulted for Express Scripts, Kolon Tissue Gene, LG Chem, and Regeneron. In the past year, he also received institutional grants for clinical trials from AbbVie, Cumberland, Eicos, Eli Lilly, GlaxoSmithKline, Mitsubishi, and Pfizer. Allen had no relevant financial relationships to disclose.