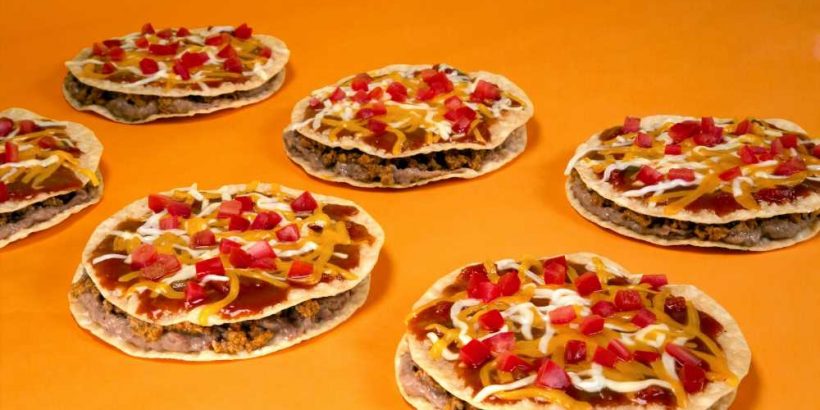 Like many of us, Taco Bell has been going through some changes this year. First, they announced they were streamlining their menu by cutting around a dozen items, then they debuted a new restaurant concept meant to cater to to-go orders. Now, the chain has announced even MORE changes to its menu and we’re breaking down what’s being cut and what is coming soon.

In a news post this week, the chain announced it has completed its 2020 menu revamp, which is aimed at creating a “faster and more seamless restaurant experience.” As part of that revamp, Taco Bell will be cutting a few items from menus nationwide starting on November 5. First up on the chopping block is the fan-fave Mexican Pizza. Taco Bell said it is cutting this item in part because of its environmental impact, as its packaging accounts for over seven million pounds of paperboard material per year in the U.S. Because it’s leaving, Combo #8 will now feature three Nacho Cheese Doritos Locos Tacos Supreme with a large drink all for $6.99.

Next up to be cut is Pico de Gallo, but the chain said you can still get a similar experience by ordering diced tomato. Finally, and this is a tough one, Taco Bell will also be cutting shredded chicken, which means the chain is cutting the Shredded Chicken Soft Taco, Shredded Chicken Burrito, and Shredded Chicken Quesadilla Melt. Ouch, 2020, what else will you have for us?

But it’s out with the old and in with the new, because Taco Bell is adding a few new menu items to soothe us come November 5. On that day, you can order a Chicken Chipotle Melt, which is made with marinated all-white meat grilled chicken, chipotle sauce, and cheddar cheese rolled and melted together. The next menu item, the Dragonfruit Freeze, will be available on September 24. It’s described as “a tropical frozen beverage swirled with a burst of dragonfruit flavor.”

Finally, two regional items will be joining the menu in select locations. First up: A Green Sauce made with fire-roasted green chilies, pureed jalapeño, and hatch green chiles is coming to select markets this fall. The Quesalupa (which hit the chain a few years ago) will also be getting another test in Knoxville, TN. I know it’s all a lot to take in, but change is good…even if it means saying goodbye to our fave drunk foods.