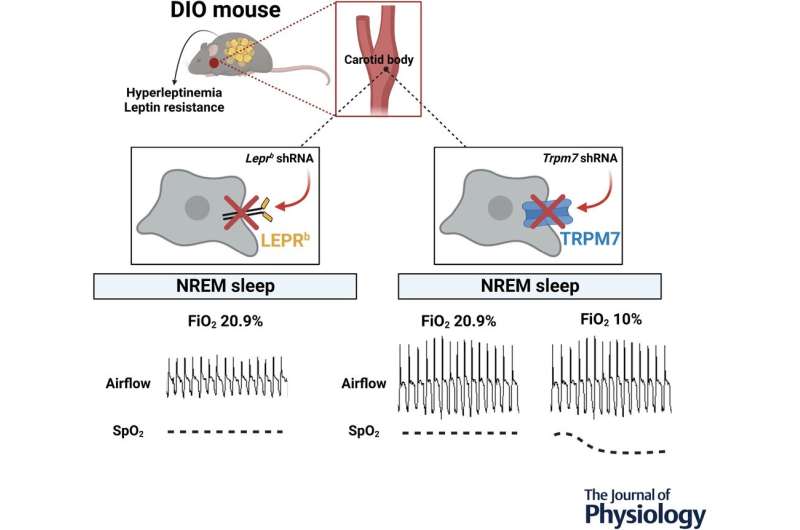 The protein, a cation channel known as TRPM7, is found in carotid bodies, tiny sensory organs in the neck that detect oxygen and carbon dioxide changes, and certain hormones such as leptin, in the bloodstream. TRPM7 proteins help transport and regulate the stream of positively charged molecules in and out of the carotid bodies’ cells.

The new research, carried out in the Johns Hopkins Medicine Polotsky Research Lab and led by postdoctoral fellow Lenise Kim, Ph.D., builds on previous findings from the lab that show that TRPM7 contributed to the development of high blood pressure in mice.

The latest experiments, described in a report first published October 10 in The Journal of Physiology, revealed that TRPM7 plays a role in suppressing breathing in obese mice with symptoms of sleep-disordered breathing conditions.

Sleep-disordered breathing is characterized by breathing that stops and starts throughout sleep and is estimated to affect up to 45% of obese Americans. Untreated, the condition can worsen heart disease progression and diabetes, cause significant fatigue, as well as death from poor oxygenation. Lifestyle changes such as weight loss and nightly use of continuous positive airway pressure devices, or CPAP, can alleviate sleep apnea, but CPAP treatment is often poorly tolerated by patients.

“CPAP actually works for most patients, the fact is that most patients are not adherent to this treatment,” says Kim. “So knowing that TRPM7 contributed to high blood pressure and sleep-disordered breathing, we wondered if blocking or eliminating that channel could offer a new treatment target.”

Using silencing RNA, the researchers knocked out the gene responsible for the production of the TRPM7 channel protein, reducing the number of TRPM7 channels in the carotid bodies of obese mice. Mice then underwent a sleep study, during which researchers observed their breathing patterns and blood oxygen levels.

Researchers say these data are a significant improvement in ventilation when compared to obese mice that had TRPM7, whose average minute ventilation was 0.73 mL/min/g. These findings indicate the ventilatory capacity in these mice was improved while they slept, effectively combating the decreased breathing patterns of sleep apnea.

Notably, the researchers found that despite the increased ventilation in obese mice lacking TRPM7, their blood oxygen levels did not increase. For this finding, researchers exposed the mice to hypoxic—or low-oxygen—environments and then monitored their breathing patterns. Although the mice’s minute ventilation increased by 20%, from 1.5 mL/min/g to 1.8 mL/min/g, their bloodstream oxygen levels decreased, meaning their additional inhalations did not help saturate the body with more oxygen.

“This suggests that treatments designed to reduce or erase TRPM7 in carotid bodies would not be workable for people living in low-oxygen environments, such as those in very high altitudes, or for those with conditions that already limit blood oxygen saturation, such as lung disease,” says Kim.

The team’s findings also illustrate that the hormone leptin—which is produced in fat cells and is responsible for curbing appetite—may cause an increase in TRPM7 channels. Leptin is already known to accelerate production and increase the concentration of TRPM7 in carotid bodies. In obese mice who possess more fat cells, the increased amount of leptin may lead to an oversaturation of TRPM7. These high levels of the cation channel in turn may lead to the low respiration rates observed in obese mice with TRPM7.