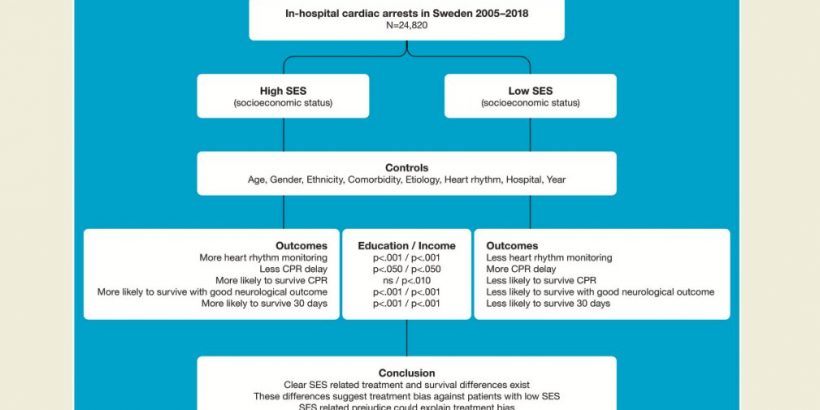 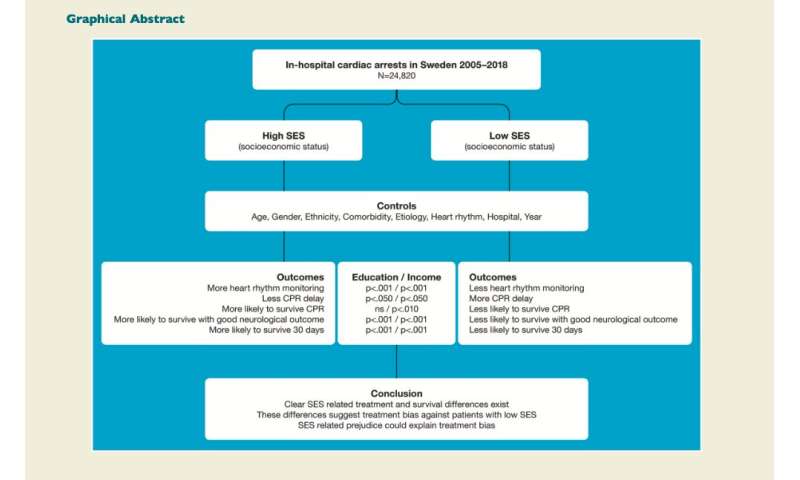 These are the findings of a new study in over 24,000 patients in Sweden, published in the European Heart Journal today. It is the first European study to investigate this and the first to show that socioeconomic status (SES), rather than other factors, is important. The authors believe their findings could hold true for other European countries as well.

It is known that people with lower SES are less likely to survive a sudden cardiac arrest outside the hospital setting compared to those of higher SES but, until now, it has not been clear whether this was the case for patients already in hospital where they could expect to receive the same standard of care regardless of their backgrounds.

In the current study, Professor Jens Agerström, from Linnaeus University in Kalmar and Växjö, Sweden, and his Swedish colleagues, found that patients in hospital with higher incomes and education were significantly less likely to experience a delay in receiving CPR after a cardiac arrest, and significantly more likely to survive until discharge from hospital and for 30 days after the cardiac arrest.

Prof. Agerström said: “The good news is that for most of the cardiac arrest cases in this study, socioeconomic status didn’t seem to matter. Nevertheless, there seems to be a significant number of deaths that can still be attributed to socioeconomic factors, even when we take account of things that could affect the results such as gender, age, ethnicity, other health conditions, cause of the cardiac arrest, and the specific hospital providing the treatment.

The researchers also found that patients with higher SES were significantly more likely to have their heart rhythm monitored before they suffered a cardiac arrest and this was associated with less delay before CPR, a shorter duration of CPR and increased survival immediately afterwards and 30 days later. This could partially explain the differences in survival.

The researchers write in their paper: “The finding that SES difference remain after controlling for major demographic, clinical and contextual factors suggests the presence of treatment bias/discrimination. Such bias, where patients are treated differently due to their SES, may stem from prejudiced attitudes among hospital staff.”

They continue: “Reassuringly, however, most of the uncovered associations between patient SES and the studied outcomes are small, meaning that a large majority of IHCA [in-hospital cardiac arrest] patients with low SES is not subjected to disparate treatment. However, because human lives are at stake, a SES-related survival odds difference of approximately 21% (our effect size for 30-day survival) should not be ignored. This would mean that 818 of the 14,714 IHCA deaths of the lowly educated patients . . . could be attributed to education.” They suggest that hospitals may want to consider enrolling their cardiac arrest teams in equality training programmes to help them be aware of their possible bias and how this could translate into discriminatory treatment.

The researchers analysed data from the Swedish National Registry of Cardiopulmonary Resuscitation for 24,217 cardiac arrests that occurred in patients aged 40 or over in Swedish hospitals between 2005 and 2018. They obtained socioeconomic data on patients from a second database and they used highest level of education and annual income as indicators of SES. They adjusted their results to take account of factors that could affect them, such as age, gender, ethnicity, other medical conditions, hospital where they were treated, heart rhythm and the cause of the cardiac arrest.

Prof. Agerström said: “The current study only examined cases where resuscitation was started because these are the cases that appear in the Swedish National Registry of CPR. It’s possible that SES disparities are more pronounced when the medical staff decide whether or not to initiate CPR in the first place.”

Other limitations of the study include that it can show only that the SES is associated with CPR and survival, not that SES causes fewer CPR attempts and lower survival rates among people with low SES. The researchers did not have access to smoking habits and other lifestyle factors and, because the study was conducted in Sweden, it might not be possible to generalise to other countries.

“Because it has been shown that people with low SES face prejudiced attitudes in many societies and cultures, it is possible that there are SES disparities in in-hospital cardiac arrest care and outcome in other European countries too. This, of course, rests on the assumption that prejudice plays an important role in the observed differences,” said Prof. Agerström.