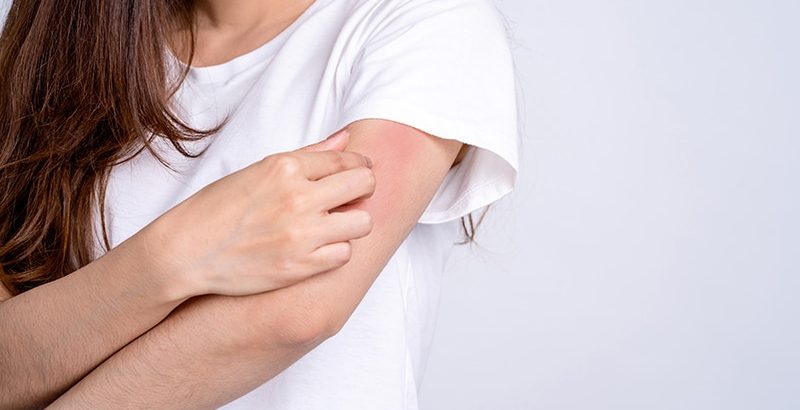 MADRID — Skin manifestations of COVID-19 were among the topics presented in several sessions at the 49th Congress of the Spanish Academy of Dermatology and Venereology (AEDV). Specialists agreed that fewer skin changes associated with this virus have been seen with the latest variants of SARS-CoV-2. They highlighted the results of the most remarkable research on this topic that were presented in this forum.

In the study, which was carried out by Spanish dermatologists with the support of the AEDV, researchers analyzed skin reactions associated with the COVID-19 vaccine.

Study author Cristina Galván, MD, a dermatologist at the University Hospital of Móstoles, Madrid, said, “This is the first study that analyzes a significant number of cases assessed by dermatologists and illustrated with clinical images of the dermatological manifestations caused as a reaction to these vaccines.”

The study was carried out during the first months of COVID-19 vaccination, Galván told Medscape Spanish Edition. It was proposed as a continuation of a COVID skin study that was published in the British Journal of Dermatology in April 2020. That study documented the first classification of skin lesions associated with COVID-19. Galván is the lead author of the latter study.

“The objectives of this study were to characterize and classify skin reactions after vaccination, identify their chronology, and analyze the associations with a series of antecedents: dermatological and allergic diseases, previous SARS-CoV-2 infection, and skin reactions associated with COVID-19,” said Galván. The study was a team effort, she added.

“It was conducted between February 15 and May 12, 2021, and information was gathered on 405 reactions that appeared during the 21 days after any dose of the COVID-19 vaccines approved at that time in Spain: the Pfizer/BioNTech, Moderna, and University of Oxford/AstraZeneca vaccines,” she added.

Galván explained that the study shows very clear patterns and reaches conclusions that match those of other groups that have investigated this topic. “Six reaction patterns were described according to their frequency. The first is the ‘COVID-19 arm,’ which consists of a local reaction at the injection site and occurs almost exclusively in women and in 70% of cases after inoculation with the Moderna serum. It is a manifestation that resolves well and does not always recur in subsequent doses. More than half are of delayed onset: biopsied patients show signs of a delayed hypersensitivity reaction. In line with all the publications in this regard, it was found that this reaction is not a reason to skip or delay a dose.”

The second pattern is urticarial, which, according to the specialist, occurs with equal frequency after the administration of all vaccines and is well controlled with antihistamines. “This is a very nonspecific pattern, which does not prevent it from still being frequent. It was not associated with drug intake.

Less frequently, reactivations or de novo onset of different dermatologic diseases were found. “Varicella-zoster virus reactivations were observed with a frequency of 13.8%, being more common after the Pfizer/BioNTech vaccine,” said Galván. “Other studies have corroborated this increase in herpes zoster, although it has been seen that the absolute number is low, so the benefits of the vaccine outweigh this eventual complication. At the same time and along the same lines, vaccination against herpes zoster is recommended for those over 50 years of age.”

Another fact revealed by the study is that these reactions were not significantly more severe in people with dermatologic diseases, those with previous infection, or those with skin manifestation associated with COVID-19.

Galván highlighted that except for the COVID-19 arm, these patterns were among those associated with the disease, “which supports [the idea] that it does not demonstrate that the host’s immune reaction to the infection was playing a role.”

Many of these reactions are more intense in women. “Before starting to use these vaccines, we already knew that messenger RNA vaccines (a powerful activator of innate immunity) induce frequent reactions, that adjuvants and excipients (polyethylene glycol and polysorbate) also generate them, and that other factors influence reactogenicity, among those of us of the same age and sex, reactions being more frequent in younger people and in women,” said Galván. “This may be one of the reasons why the COVID-19 arm is so much more prevalent in the female population and that 80% of all reactions that were collected were in women.”

In relation to the fact that manifestations differed, depending on the type of inoculated serum, Galván said, “Some reactions are just as common after any of the vaccines. However, others are not, as is the case with the COVID-19 arm for the Moderna vaccine or reactivations of the herpes virus, more frequent after the Pfizer/BioNTech vaccine.

“Undoubtedly, behind these differences are particularities in the immune reaction caused by each of the vaccines and their composition, including the excipients,” she said.

Regarding the fact that these reactions were the same throughout the vaccine regimen or that they varied in intensity, depending on the dose, Galván said, “In our study, as in those carried out by other groups, there were no significant differences in terms of frequency after the first and second doses. One thing to keep in mind is that, due to the temporary design of our study and the time at which it was conducted, it was not possible to collect reactions after second doses of AstraZeneca.

“Manifestations have generally been mild and well controlled. Many of them did not recur after the second dose, and the vast majority did not prevent completion of the vaccination scheme, but we must not lose sight of the fact that 20% of these manifestations were assessed by the dermatologist as serious or very serious,” Galván added.

Regarding the next steps planned for this line of research, Galván commented, “We are awaiting the evolution of the reported cases and the reactions that may arise, although for now, our group does not have any open studies. The most important thing now is to be alert and report the data observed in the pharmacovigilance systems, in open registries, and in scientific literature to generate evidence.”

This article was translated from the Medscape Spanish edition.