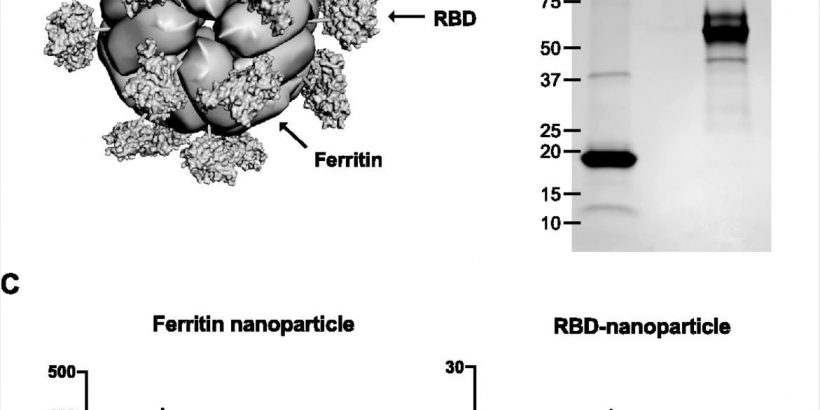 COVID-19 (coronavirus disease 2019) is caused by a new positive-strand RNA coronavirus, the severe acute respiratory syndrome coronavirus 2 (SARS-CoV-2), which belongs to the Coronaviridae family. To date, more than 117 million people have been infected with SARS-CoV-2 globally, among which nearly 2.6 million have died. The overwhelming number of SARS-CoV-2 patients has devastated healthcare resources worldwide.

There is a need for strong preventive measures to control the pandemic, mitigate the viral transmission, and stop its destructive effects. While coronaviruses commonly circulate in humans and causing common colds, there were no vaccines against them until the COVID-19 pandemic. At an unprecedented pace, SARS-CoV-2 vaccines were developed and administered across the world.

The SARS-CoV-2 viral envelope is coronated with the heavily glycosylated Spike (S) protein protruding from the virion surface. It is the crucial bridge between the virus and the host cell, playing a crucial role in host cell receptor recognition, virion attachment, and ultimately entry into the host cell. The S1 subunit of the S protein confers specificity in cell tropism through its receptor-binding domain (RBD). Therefore, the RBD is the primary target for the development of vaccine candidates.

The currently developed vaccines against SARS-CoV-2 include the RBD in their immunogen. With a similar objective, a new study developed an RBD protein-based vaccine candidate against the SARS-CoV-2, using self-assembling Helicobacter pylori-bullfrog ferritin nanoparticles as an antigen delivery system. The study is published recently in the journal mBio (by the American Society of Microbiology). 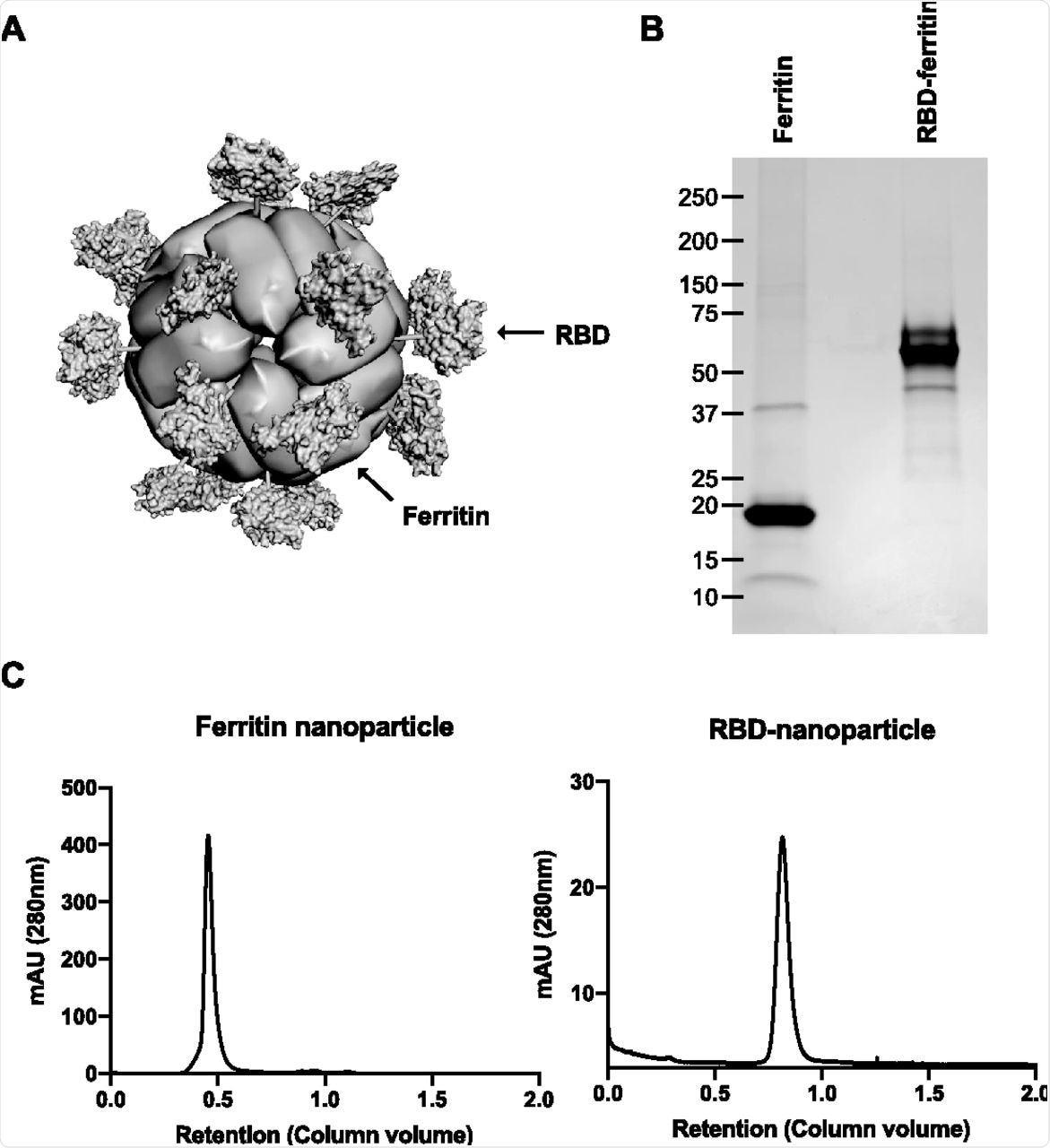 Design and purification of RBD-nanoparticles. (A) Computer-assisted modeling of an RBD-nanoparticle based on previously solved structures of H. pylori ferritin (PDB accession no. 3EGM) and SARS-CoV-2 RBD (PDB accession no. 7JMP). The RBD forms radial projections on a 3-fold axis point of the fully assembled nanoparticle. (B) Coomassie blue staining of purified ferritin-nanoparticles and RBD-nanoparticles following SDS-PAGE. (C) Size exclusion chromatography peaks of the concentrated supernatants from HEK293T cells transfected with plasmids encoding secreted ferritin-nanoparticles or RBD-nanoparticles. The supernatants were concentrated with 100-kDa-MWCO and 500-kDa-MWCO filters on a TFF system and loaded onto Superdex 200 Increase 10/300 GL and HiPrep 16/60 Sephacryl S-500 HR gel filtration columns on a Bio-Rad NGC chromatography system, respectively. mAU, arbitrary units (in thousands).

In this study, a collaborative team from the Republic of Korea and the USA reported this new vaccine candidate – Spike receptor binding nanoparticles – for the SARS-CoV-2 infection. They have demonstrated the study in ferrets with remarkable neutralizing activity against SARS-CoV-2.

The researchers purified the RBD-nanoparticle from transfected HEK293T cells and immunized the ferrets via the intramuscular (i.m.) and intranasal (i.n.) routes. They monitored the induction of neutralizing antibodies. Then, they challenged the vaccinated ferrets with SARS-CoV-2 and observed the protective immunity against the SARS-CoV-2.

Interestingly, the researchers observed that the vaccinated ferrets demonstrated efficient protection from the SARS-CoV-2 challenge, with no fever, body weight loss, or clinical symptoms. They also observed rapid clearance of infectious virus in nasal washes and lungs and viral RNA in respiratory organs.

Because the ferrets are naturally susceptible to human respiratory viruses, the researchers in this study used ferrets as an ideal model to study respiratory virus infections in humans. Also, the ferrets share with humans the anatomy of upper and lower respiratory tracts, the architecture of terminal bronchioles, and the density of submucosal glands. Unlike the current human ACE2 (hACE2)-transgenic mouse model, the SARS-CoV-2 infected ferrets have shown immune responses and pathogenic progress similar to humans’ and shed the virus through the nasal wash, saliva, urine, and fecal samples, which recapitulates the human SARS-CoV-2 infection.

The latest advances in molecular biology and nanotechnology have recently adopted nanoparticle engineering to serve as a platform for vaccines – to design small virus-like particles. It is established that the human immune system reacts efficiently only against immunogens of nanometer range in size. Thus, it is also reported that the efficacy of these nanoparticle-engineered vaccines exceeds compared to the traditional vaccines.

The researchers used nanoparticle-based vaccines because of their immunological advantage: efficient antigen transport to draining lymph nodes and antigen presentation by follicular dendritic and helper T cells and high levels of activation of the germinal centers.

Ferritin is a well-characterized genetically engineered nanoparticle with a natural tendency to self-assemble into a 24-meric homopolymer. Because it is amenable via fusion peptides, highly stable ferritin is an ideal candidate for drug delivery and vaccine development.

For this study, the researchers used one of the recently engineered ferritins for vaccine development. The self-assembling Helicobacter pylori-bullfrog (Rana catesbeiana) hybrid ferritin carries NH2-terminal residues from the lower subunit of bullfrog ferritin on the core of Helicobacter pylori ferritin to form radially projecting tails.

“The H. pylori ferritin-based nanoparticle has been reported to be an effective platform for vaccines to carry trimeric glycoproteins for presenting viral immunogens on its 3-fold axis points.”

In an alternative vaccine approach against the SARS-CoV-2, the researchers used a well-characterized nanotechnological approach to produce safer and potent vaccines.

This study demonstrated the immunogenic efficacy of the self-assembling spike RBD-ferritin nanoparticle (RBD-nanoparticle) as an efficient SARS-CoV-2 vaccine antigen.

The researchers investigated the vaccine potential of the RBD-nanoparticles by challenging the immunized ferrets with a high virus titer. They found that the Immunized ferrets showed considerably reduced clinical symptoms, such as body weight loss, cough, runny nose, and movement activity, upon challenge with high-titer SARS-CoV-2.

Based on this study's observations, the researchers proposed the self-assembling RBD-nanoparticles as a potential vaccine candidate that can effectively protect against SARS-CoV-2 infection. This calls for further additional studies on the proposed vaccine candidate to understand humoral and cellular immunity.

Ramya has a Ph.D. in Biotechnology from the National Chemical Laboratories (CSIR-NCL), in Pune. Her work consisted of functionalizing nanoparticles with different molecules of biological interest, studying the reaction system and establishing useful applications.