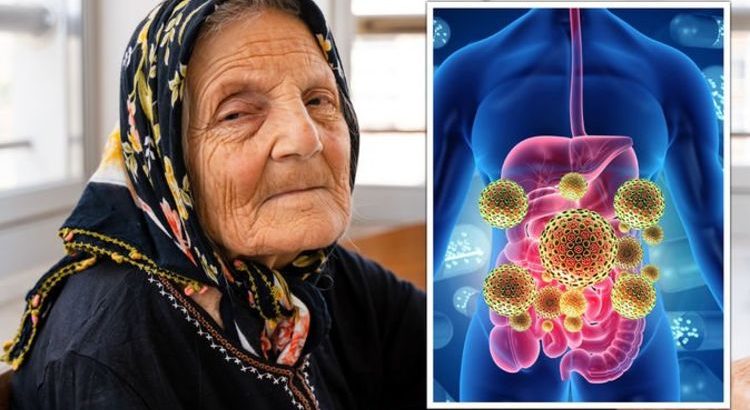 Gut health: Dr Chris George on how to improve microbiome

Living in the gut are 300 to 500 different kinds of bacteria containing nearly two million genes. When paired with other organisms, they make up what’s known as the microbiata, which is unique to each person. A study published in Nature, found that people who live past their 100th birthday are more likely to carry certain bacteria in their gut that produce powerful antimicrobial compounds.

For the study, researchers analysed centenarians’ microbiata through stool samples gathered from 160 people aged over 100.

The study found that odirobacteriaceae – a bacteria that stops the growth of other dangerous bacteria by producing unique bile acids – was largely present in the gut of those aged over 100.

From the samples, researchers observed that the centenarians were enriched in the gut microbes capable of generating the unique bile acid, compared with elderly and young individuals.

READ MORE: Gut health: The 7 signs YOUR gut is unhealthy

According to the National Institutes of Health, bile is a fluid produced by the liver and stored in the gallbladder.

Bile acids are compounds in bile that aid in digestion.

After the liver produces bile acids, they are released into the intestine, where they are chemically modified into secondary bile acids.

The author of the study, Professor Kenya Honda, at Keio University of Medicine in Tokyo, told the Daily Mail: “Perhaps genetic factors and diet have influence on the composition of the gut’s microbiota.

“These bugs could also be inherited but we don’t have any data indicating this possibility.”

The bile acid, known as isoallo-lithocholic acid, has previously been found to have a strong antimicrobial effect against a range of gut pathogens.

The acid proved particularly efficient at fending off the drug-resistant pathogen Clostridioides difficile, a bacterium known to cause severe diarrhoea, especially in people being treated with antibiotics.

According to the NHS, C. difficile infections can sometimes lead to serious bowel complications.

Researchers also found the bile acid metabolites demonstrated significant effect against Enterococcus faecium, which studies have found has an inherent tenacity to build resistance to antibiotics and environmental stressors that allow it to thrive in hospital environments.

Professor Honda added: “Our findings show an association between Odoribacteriaceae and centenarians.

“Although it might suggest that these bile-acid-producing bacteria may contribute to longer lifespans, we do not have any data showing the cause and effect relationship between them.”

Previous studies have found that the community of bacteria and other microorganisms that live in the gut, play a significant role in our health as we age.

Numerous studies have highlighted the link between gut health and the immune system, mental health and autoimmune diseases.

A lack of diversity in bacteria has previously been linked to frailty in older adults.

The gut starts in the mouth and teeth, and finishes at the end of the large intestine. It includes the oesophagus, the stomach, the small intestine, and the colon.

Many factors can contribute to an unhealthy gut, including high stress levels, insomnia, processed and sugar foods or even prescribed antibiotics.