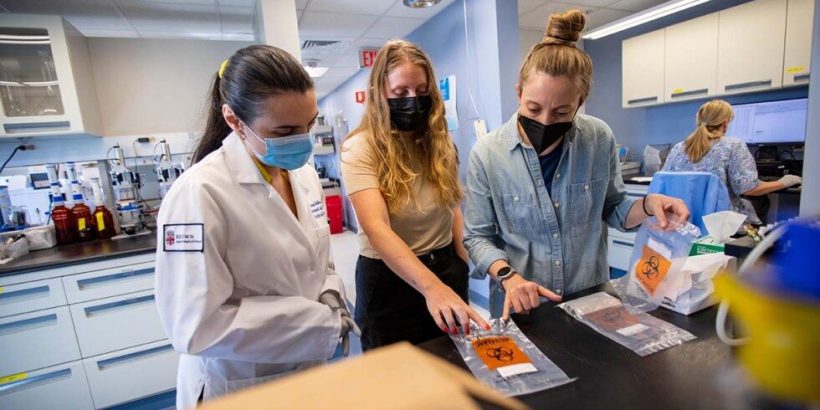 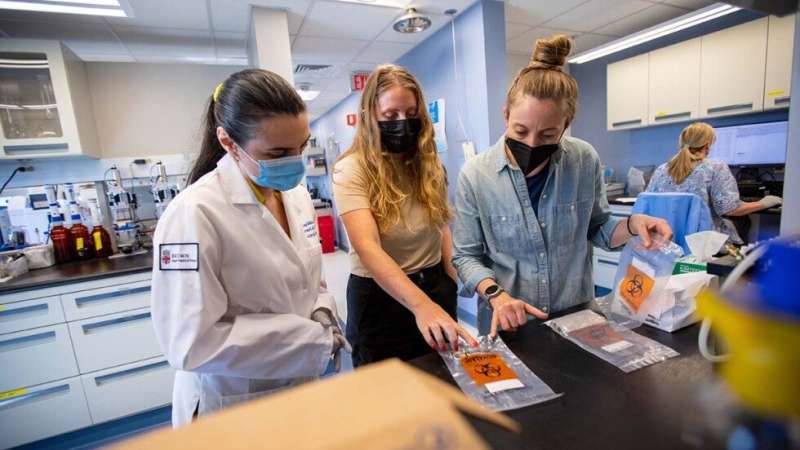 In a toxicology lab at Rhode Island Hospital in Providence, a team of Brown University researchers has been testing samples labeled “biohazard” to discover the precise nature of their toxicity. The bags contain drug residue from discarded drug paraphernalia collected from harm reduction organizations in local communities.

Once samples are tested, findings are disseminated through print flyers, social media posts and emails from the Rhode Island Department of Health. Results are also made available on PreventOversodeRI.org, the state’s overdose dashboard developed through a partnership with the Brown School of Public Health. Sample donors are contacted and provided with information regarding the contents of the residue they submitted for testing. The results can be a surprise—to the sample testers and sample donors alike.

This type of analysis is the cornerstone of TestRI, a new two-year project and study led by Brown researchers. There’s an urgent, growing need to test illicit drugs for the presence of additional drugs, according to the research team. Rhode Island, like many parts of the country, is facing an overdose crisis, due largely to the presence of synthetic opioids like fentanyl in the drug supply. Fentanyl can cause overdose even in minuscule amounts, particularly for those who have never encountered it before. If a person doesn’t realize that fentanyl is present in a supply of cocaine or methamphetamines, they have a higher risk of accidentally overdosing.

Other surprise substances can be just as dangerous: one recent TestRI alert warned about the presence of xylazine, used as an animal tranquilizer, in tested samples and advised that not even an emergency treatment of overdose-reversing naloxone may be enough to save a life.

“The drug supply across the U.S. is continuing to change rapidly, and it has left a lot of unknowns,” said Alexandra Collins, an assistant professor of epidemiology at Brown’s School of Public Health. And those unknowns are often deadly. “While there are regional differences, supply contents remain very complex and comprised of a range of synthetic and novel psychoactive substances that can really increase overdose risk.”

TestRI is one of many innovative opioid-focused projects led by scientists, researchers and physicians at Brown University’s School of Public Health and Warren Alpert Medical School. From studies on ways to prevent overdoses to evaluating intervention programs and fentanyl test strips to training future physicians to prescribe medications that can help to treat opioid use disorder, Brown faculty, students and staff have spearheaded efforts that make an important difference in the community by taking on the national opioid crisis.

TestRI’s work to collect samples is often conducted by Claire Macon, a Brown research assistant. Macon travels around the state in a pickup truck collecting samples at harm reduction organizations and meeting with people who use drugs. The process involves a fair amount of coordination, mileage and gasoline: A sample in Newport might be ready at the same time as a sample in Providence, and both will need to be dropped off at the lab as soon as possible.

In the lab at Rhode Island Hospital, Adina Badea, director of toxicology at the Lifespan Academic Medical Center, tests the samples using a machine called a liquid chromatography quadrupole time of flight mass spectrometer—its nickname, LC-QTOF-MS, isn’t much shorter—which uses various techniques to determine what chemical compounds are included in a particular sample.

The lab instruments are incredibly sensitive, and detecting the presence of irrelevant substances may invalidate test results, said Badea, who is also an assistant professor of pathology and laboratory medicine at Brown. She changes her gloves frequently to avoid cross contamination.

As part of a demonstration on a July afternoon, Badea pointed to a sample labeled “crack cocaine” and explained that it must be diluted prior to analysis. The mass spectrometer would then run a number of tests on the sample and compare it to a library of pure compounds housed in the lab that serve as analytical standards—like comparing fingerprints, she said. Identifying which specific compounds are in a sample takes about 12 to 14 minutes, and the instrument software produces the results in a matter of seconds.

Then the testers weigh in.

“The software does a lot of the work, but the human researchers still have to double-check the results and make sure everything makes sense,” Badea said. “No matter how fancy your software is, you can never just let it result information directly. Due to the implications of this work, you will need a human to confirm it, even if the software only gets it wrong one out of every 100 times.”

After the program launched in May, test samples starting showing a multitude of unexpected compounds to the point that Badea worried that she might be accidentally contaminating them.

“In the beginning I was so paranoid, I cleaned my instrument and ran my samples again,” she said. But it wasn’t the researcher; it was the drugs themselves. “It sometimes seems odd, but I have no reason not to trust the results. And after a number of samples tested, you start to see—oh, this is a trend, this is a pattern, this is real.”

Dr. Rachel Wightman, in her role as an emergency physician at Rhode Island Hospital and the Miriam Hospital, has seen firsthand the dire effects of the changing drug supply. First responders in the emergency department are increasingly treating patients for drug overdoses after use of stimulants like cocaine and methamphetamine where fentanyl is present, Wightman said.

Revealing to people the unexpected ingredients in their drugs can help them exercise more caution and take additional protective steps while using drugs, said Wightman, who is a Brown assistant professor of emergency medicine. This could include using in the presence of other people, instead of using alone; taking smaller doses or ones that are gradually increased over time; and making sure they have access to naloxone, which can reverse an overdose by blocking the brain’s opioid receptors. Taking safe steps while using potentially deadly substances has been proven to save lives, she noted.

Beyond testing the drugs, researchers are also studying the people who use them: who they are, when and how they use drugs, and how they’re navigating the current, often-toxic drug supply. This information can lead to the development of targeted materials and messaging to help people stay safe.

To paint a clearer picture of drug use in Rhode Island, the TestRI team uses ethnographic methods that include detailed interviews with people about their behavior and perceptions around drug use. The team’s study will enroll 50 people in Rhode Island who use drugs, who will then be interviewed in-person twice during the study period. After the first round of interviews is complete, at around six months, responses will be analyzed to understand how drug use is being impacted by the current supply. Recruitment for the study is ongoing.

“In this project, we use both fieldwork—spending time with people in their daily contexts—and in-depth interviews to add deeper insights to the study,” Collins said. While she said that most participants choose to donate drug samples, it’s not a requirement.

The team pointed out that TestRI represents a true hybrid of community and toxicological research: Drug samples are collected in the community, along with the stories and experiences of the people who use them. The samples are then tested in a lab, and results about the drugs’ true composition are communicated back to the people who can use the information to make safer decisions. Findings are also shared with clinicians, outreach workers, the state’s department of health and local communities. Later, findings from the interviews will be published and disseminated to the public at large.

Those involved in the project hope that it will contribute to a better understanding of the overdose crisis so that steps can be taken to decrease deaths. As toxicology testing can be expensive to fund, they are limited in how many samples they can test. Given the demand for testing these substances, the researchers hope to scale up the project in the future to be able to routinely test more samples from people around the state.