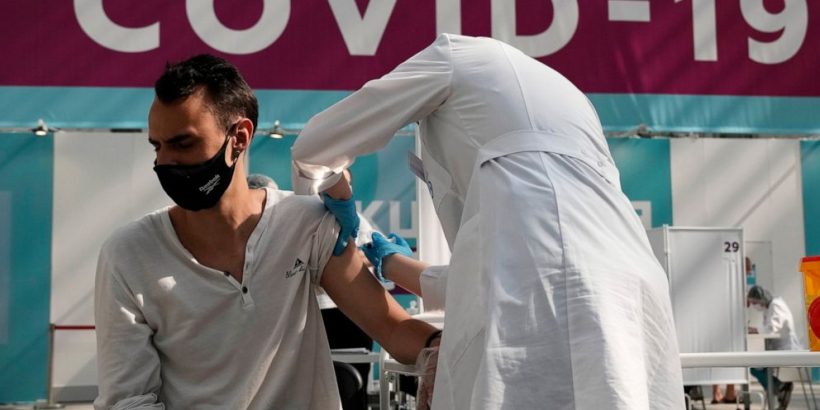 MOSCOW — Russia’s health officials have given a go-ahead to testing a combination of the AstraZeneca coronavirus shot and the single-dose version of the domestically developed Sputnik V vaccine, according to the country’s registry of approved clinical trials.

The small study, which was scheduled to start July 26 and end in March next year, will enroll 150 volunteers and look at the mixed regimen’s safety and capability to trigger immune response, records show. It will be conducted in five medical facilities in Moscow and St. Petersburg.

AstraZeneca developed its vaccine with Oxford University. Sputnik V was developed by the state-run Gamaleya Center in Moscow, and the Russian Direct Investment Fund bankrolled the project. Both shots use a similar technology, employing a harmless virus to deliver genetic material from the spike protein of COVID-19 into the body, which then prompts an immune response.

Russian officials introduced Sputnik V last year as a two-shot vaccine using different viruses in each dose, but they also have separately marketed the first shot as a single-dose alternative dubbed Sputnik Light.

The developers of Sputnik V proposed combining the shots to AstraZeneca in November, suggesting it could increase the effectiveness of the British vaccine. AstraZeneca announced a study to test the combination in December.

In May, however, the ethical committee of Russia’s Health Ministry suspended the process of giving the trial a green light and requested additional documents for review.

According to the official Twitter account of Sputnik V, the go-ahead by the ministry this week comes as similar trials are ongoing in Azerbaijan, Argentina and United Arab Emirates.

“More trials of Sputnik Light with other producers are also underway in different countries in order to increase the efficacy of other vaccines,” Spuntik V’s developers reported on Twitter.

Russia gave Spuntik V regulatory approval in August 2020. The vaccine initially faced skepticism at home and abroad because it had only been tested on a few dozen people at the time. A report in the British medical journal The Lancet this year blunted the criticism, saying large-scale testing showed the vaccine to be safe and having a 91% efficacy rate,

The one-dose version, Sputnik Light, received approval in May and was released for use last month. Russian authorities have also approved two other domestically developed jabs, EpiVacCorona and CoviVac. But no data on the efficacy of those two vaccines has been released, and Spuntik V remains the most widely used coronavirus vaccine in Russia.

A large U.S. study found the AstraZeneca shot to be about 79% effective in preventing symptomatic disease, but it may be slightly less effective against emerging variants, including the delta.

The World Health Organization has said it’s likely that mixing and matching different COVID-19 vaccines probably works, but more data is needed to be certain.