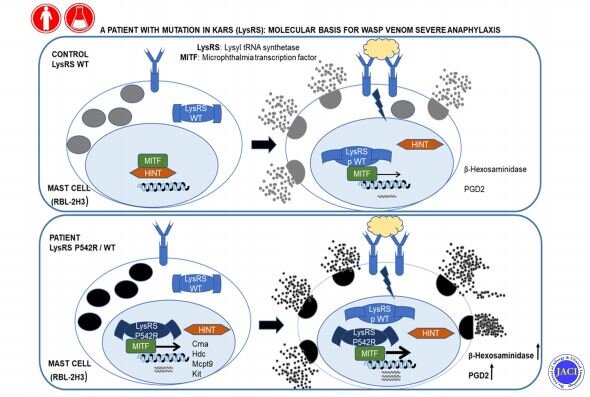 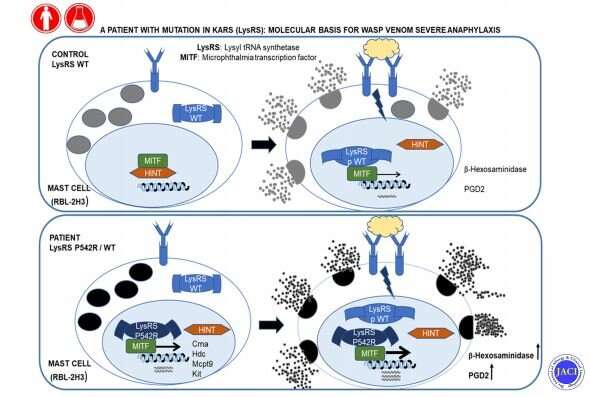 Anaphylaxis is a systemic allergic reaction that can affect the skin, the gastrointestinal tract, the respiratory system and the cardiovascular system. The most severe form of anaphylaxis is anaphylactic shock, which features hypotension and can cause death. This reaction can have several causes, such as allergic reactions to food, medicines or insect venom.

The molecular mechanisms that cause the severity of these kinds of reactions is still unknown. In a study led by researchers of the University of Barcelona and IDIBAPS, researchers analyzed the mutation of a gen detected in a patient who suffered from recurrent anaphylactic shocks caused by the allergy to paper wasp venom (Polistes dominula). The results, published in the Journal of Allergy and Clinical Immunology, revealed a new molecular mechanism that can control the degree of severity in an anaphylactic reaction.

The study is led by UB and IDIBAPS researchers Margarita Martín and Rosa Muñoz-Cano. Both are members of the Asthma, Allergic and Adverse Reactions Network (ARADyAL) of the Carlos III Institute.

Researchers carried out the biochemical, functional and structural characterization of mutations in the KARS gen, detected in the patient. “The study combines clinical data from the patient with severe anaphylaxis and carrier of a mutation in the KARS gen, with biochemical, functional and structural data that show an anomalous function of the LysRS protein, coded by this gene,” notes Margarita Martín.

The LysRS protein is an enzyme with a dual function. It plays a key role in the protein synthesis, and it is regulated by the phosphorylation in the highaffinity receptor for immunoglobulin E (IgE) and activates the MITF transcription factor, which takes part in the transcription of proinflammatory mediators in the mast cell, a type of cells in the immune system that act as inflammatory processes caused by allergic reactions.

From the biochemical perspective, results show that the replacement of a proline for an arginine in the LysRS protein aminoacid 542 causes structural changes. These changes affect the protein, which moves towards the nucleus and stops its function in the protein synthesis, activating the MITF transcription factor when there is a lack of stimuli. “This cause sthe increase in the synthesis of proinflammatory mediators and an activation of the mast cell in presence of the allergen, which drives to an anaphylactic shock. The new mechanism identified in this study involves the signaling base IgE-LysRWS-MITF, which would control the degree of severity in an anaphylactic reaction,” says Margarita Martín.

“This discovery will enable us to identify those patients at risk of having severe anaphylaxis, probably beyond those caused by the paper wasp, and set the proper prophylactic measures,” concludes Rosa Muñoz-Cano, also doctor in the Allergology Department of Hospital Clínic.