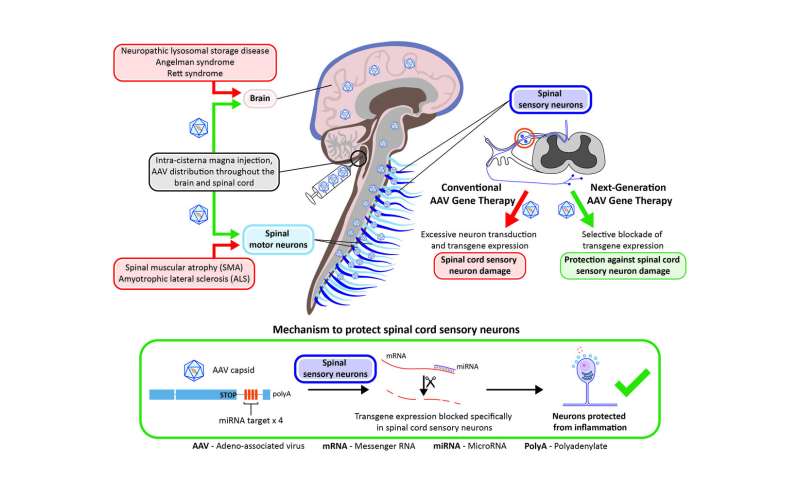 Penn Medicine researchers have developed a new targeted approach to prevent a toxicity seen in the sensory neurons of dorsal root ganglia after gene therapy to treat neurological disorders. It’s an important hurdle to clear, as the field works toward more safe and effective gene therapies for patients with disorders like spinal muscular atrophy.

The findings were reported online this week in the Science Translational Medicine.

The toxicity has not been reported in humans, but studies in nonhuman primates using adeno-associated viral (AAV) vectors to deliver corrected genes via the spinal cord fluid and intravenously have revealed problems of axonal degeneration in some tracts of the spinal cord and peripheral nerves. The cause was traced back to the dorsal root ganglion, or DRG, a cluster of neural cells on the outside of the spinal cord responsible for transmission of sensory messages. 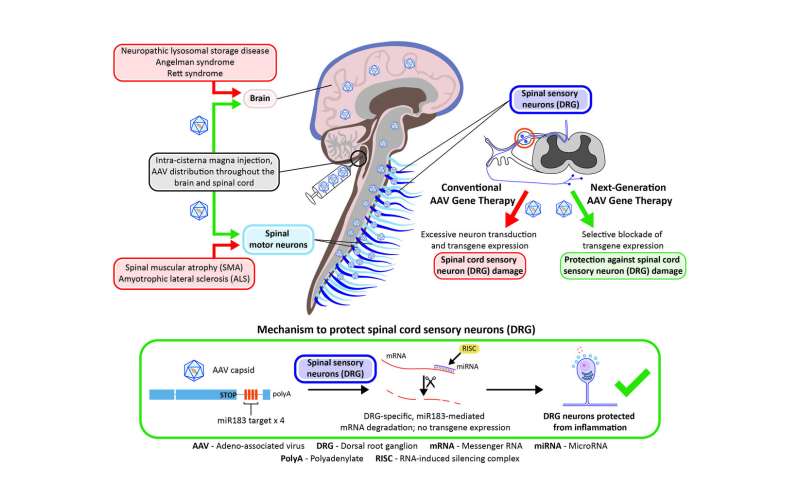 “We believe it is a safe, straightforward way to ameliorate the safety of AAV therapy for the central nervous system,” said first author Juliette Hordeaux, DVM, Ph.D., senior director of Translational Research in Penn’s Gene Therapy Program. “This approach could be used to design other gene therapy vectors to repress transgene expression in the cell types that are affected by the toxicity and not others, which is critical, because you need the expression everywhere else to effectively treat the disorder.”

Gene transfer expert James M. Wilson, MD, Ph.D., director of the Gene Therapy Program, and professor of Medicine and Pediatrics in Penn’s Perelman School of Medicine, served as the senior author of the paper.

After Penn researchers documented DRG toxicity in nonhuman primates, they began devising a way to overcome it. Though its asymptomatic in primates, the damage became clear under close study of histopathology in the CNS. Damage to the DRG in humans, researchers know, can lead to the breakdown of axons responsible for delivering impulses from nerves to the brain. Numbness and weakness in limbs, among other side effects, follow suit. 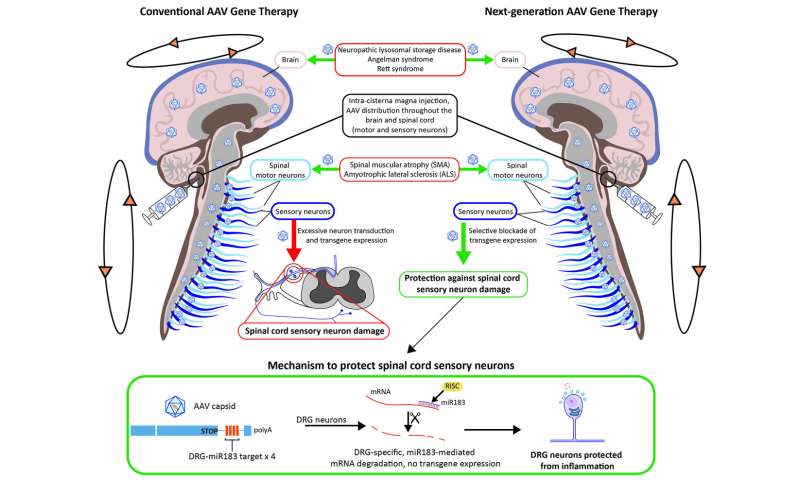 The observed toxicity in past animal studies was enough for the U.S. Food and Drug Administration to recently place a partial hold on human trials administering a gene therapy vector into the spinal cord to treat spinal muscular atrophy, the genetic disease that severely weakens muscles and causes problems with movement. In the new study, the researchers injected vectors with and without an microRNA target, first in mice and then primates. microRNA regulates gene expression and makes for an ideal target in the cells. microRNA-183 was chosen specifically because it is largely restricted to the neurons in the DRG.

Administering unmodified AAV vectors resulted in robust delivery of the new gene into target tissue and toxicity in DRG neurons. Vectors with the miRNA target, on the other hand, reduced transgene expression significantly, as well as the toxicity of DRG neurons, without affecting transduction elsewhere in the primate’s brain, histological analyses of the specimens up to 90 days later showed.An immune response was first believed to be causing the toxicity; however, the researchers debunked that hypothesis through experiments that showed how immunosuppressants and steroids were unsuccessful at alleviating the toxicity. 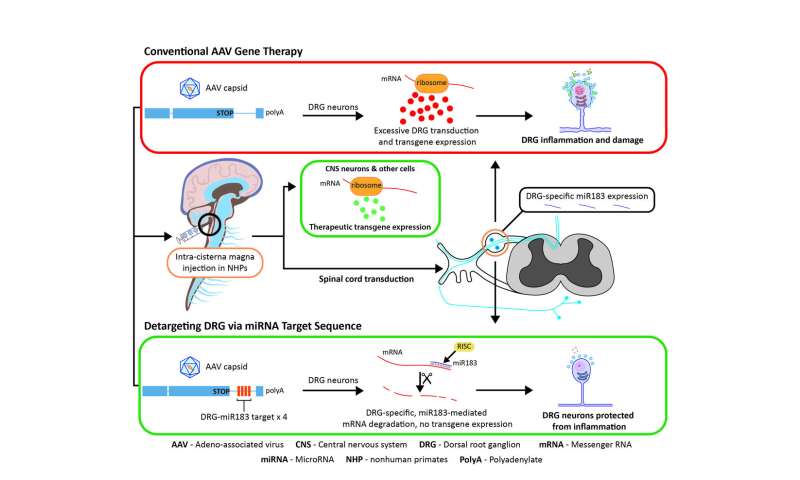 According to the authors, toxicity of DRGs is likely to occur in any gene therapy that relies on high doses of a vector or direct delivery of a vector into the spinal cord fluid. This latest study paves a path forward to prevent that damage.