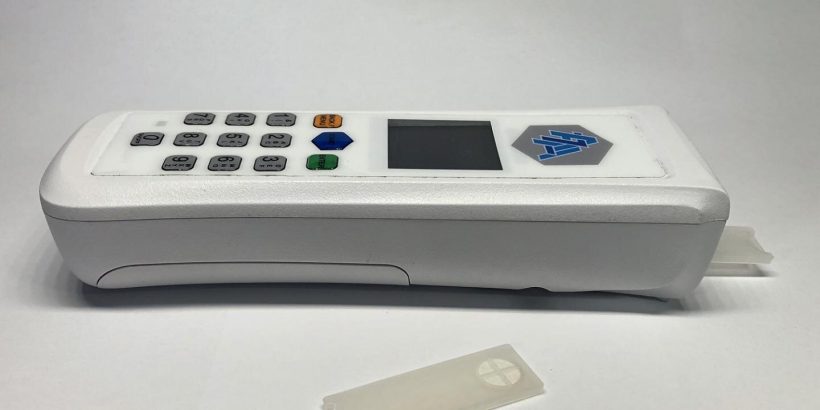 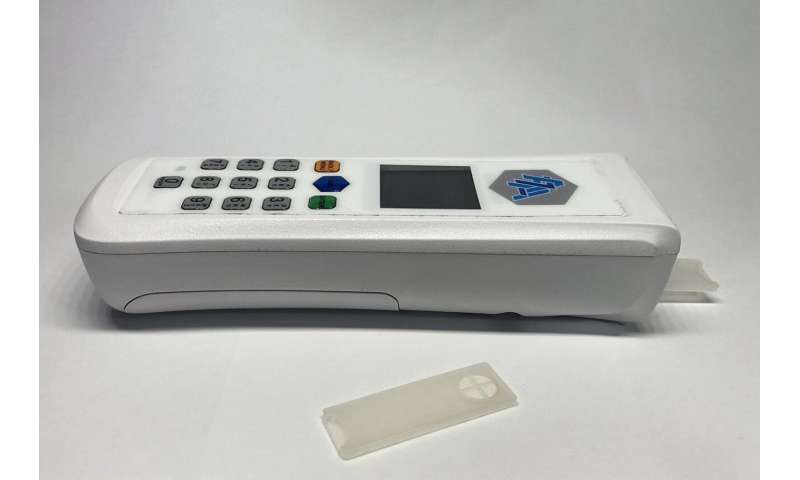 Seated around the dinner table, faculty affiliated with Stanford ChEM-H—one of Stanford University’s interdisciplinary institutes—spoke one-by-one, pitching ideas for collaborative research. Inspired by a recent medical conundrum, Gilbert Chu, a professor of medicine (oncology) and of biochemistry at Stanford Medicine, put out the call for a chemist who could help him create a sensor that could quickly, easily and accurately measure ammonia levels in blood. Just down the table Matthew Kanan, associate professor of chemistry, registered an impressive coincidence: His graduate student, Thomas Veltman, was working on a sensor for measuring ammonia in any liquid.

In the August issue of ACS Sensors, Chu, Kanan, Veltman and colleagues Natalia Gomez-Ospina and Chun Tsai have published the product of their collaboration: a handheld, portable ammonia detector that—like glucometers used to measure blood sugar—assesses ammonia levels from a finger or earlobe prick.

Ammonia is a natural product of digestion that is usually processed into urea by the liver and passed out of the body in urine. Too much ammonia in the blood can cause mental and physical dysfunction and is a concern for people with liver disease or genetic conditions that hinder ammonia metabolism. The new device could be especially beneficial for newborns with these metabolic diseases. In this population, brain damage can occur within hours of elevated ammonia levels and, for treatment, some families must drive long distances to obtain adequate testing.

“I’ve spoken with families who have children with this condition about having this kind of device and it makes them emotional because, for them, the consequences of not getting ammonia checked accurately and quickly are so severe,” said Natalia Gomez-Ospina, assistant professor of pediatrics and co-author of the paper. “For these families, it could be life-changing.”

The sensor has been tested on blood samples from patients prone to elevated ammonia levels, and a portable version of the device has been tested on blood samples dosed with ammonia. Results were accurate in both cases. Now, the researchers are making final adjustments to the design and manufacturing of the device, in hopes of readying it for a study that would be eligible for evaluation by the U.S. Food and Drug Administration (FDA).

The patient that inspired Chu’s collaboration proposal was brought into the hospital by her husband after weeks of worsening health. She was delirious and unable to walk. No one knew what was wrong until a standard blood plasma test revealed she had very elevated ammonia levels.

“The only thing that I could think of was: Could it have been my fault?” said Chu, who is co-senior author of the paper with Kanan. “I looked at her chemotherapy, which she had been taking. It was an oral form of fluorouracil, one of the oldest chemotherapy drugs. This was not a known side effect, but the timeline matched her symptoms.”

Following this lead, Chu discovered that, unbeknownst to her, the patient had an anatomical anomaly as well as gene mutations that reduced her body’s ability to metabolize ammonia. The chemotherapy drug she took blocked the body’s machinery for using ammonia to make RNA. The block in turn caused the patient to become symptomatic.

Once understood, this was an easy issue to address with known treatments. But, along the way, Chu learned that the test for measuring ammonia levels was shockingly arduous—blood had to be drawn from a vein, quickly transported on ice to an analysis lab, centrifuged to separate plasma, and then processed by a biochemical assay. Even if everything goes perfectly, results take at least two hours, but problems arise frequently. In the course of treating his patient, the blood samples Chu took were rejected twice.

“I talked to the lab about their protocols and realized that, if I’m having this problem, there have to be many community hospitals that have even bigger struggles with these tests,” said Chu.

One patient in the researchers’ clinical study was a newborn with an ammonia metabolism disorder who had blood drawn 132 times in 31 days, an amount equal to over half the average newborn’s total blood volume.

“The burden on the patients in our study was a powerful motivator. Some were having several tests a day for many days and every single one is a separate venous draw,” said Kanan. “It’s a lot of blood and pain, and if something goes wrong with the test, it’s worthless.”

In contrast, the current device requires about one drop of blood—less than 1 percent of the blood for the standard test—and thus can be obtained with a small finger or earlobe stick. The device itself is about the size of a television remote and, as with a glucometer, the blood drops are dabbed onto a test strip that is inserted into one end. It reports the ammonia level in less than a minute.

While the sensor inside the device is very similar to existing ammonia sensors—used to detect toxic ammonia gas in industrial settings—the test strips are made from scratch. Blood applied to a small hole at one end of the strip zips through a microscopic channel and sinks into a paper-lined well at the opposite end, which is coated with an inexpensive chemical that liberates the ammonia from the sample. Inside the device, this well sits directly under the ammonia sensor.

In building and testing this prototype, Veltman designed and constructed the strips by hand. He made many step-wise improvements, optimizing the design so the strips can be mass-produced simply and inexpensively. For example, two of the greatest challenges in producing the strips were the tiny sample volume and ammonia’s natural stickiness.

“The more we reduced the volume of blood, the more problems crept in,” said Veltman, who is lead author of the paper. “When you have only a small amount of ammonia, surface chemistry issues become really important. If it isn’t just right on every strip, you won’t get an accurate reading because the ammonia sticks where it shouldn’t.”

The researchers have formed a company around their invention with the ultimate goal of attaining FDA clearance for the technology.