Scientists in The University of Texas at Dallas’ Center for Advanced Pain Studies (CAPS) have furthered the understanding of how chronic pain functions differently in males and females, including identifying different ways pain begins at the cellular level.

Researchers from the Department of Neuroscience in the School of Behavioral and Brain Sciences (BBS) teamed up with colleagues from Sweden’s Karolinska Institute on two studies published Aug. 5 and Sept. 16 in the journal Pain. Their work builds upon earlier studies from CAPS faculty regarding sex dimorphisms—differences between the sexes.

“As recently as 2014, laboratories were using only males to analyze what was happening, and that led to failures in clinical and preclinical trials,” said Dr. Michael Burton, assistant professor of neuroscience and co-senior author of both papers. “It was apparent that something was missing from the equation.

“This helps us understand why treatments don’t work for all people. In the search for an alternative to opioids, if something works for only a quarter of the population, that’s not good enough.”

“Previously we knew that mechanistic differences existed, but it was not at all clear how they originated on the cellular level,” said Price, who is also an author on both papers. “The differences we found indicate that we need to develop therapeutics that target fundamentally different cell populations in males and females to make the most effective chronic pain medicines.”

Both studies focus on the behavior of a protein called high mobility group box-1 (HMGB1)—one of a group of molecules called damage-associated molecular patterns (DAMP), which are released by stressed cells and act as danger signals to cause an inflammatory response.

“What bridges the two experiments together is this particular molecular danger signal that is implicated in both peripheral and central nervous system injuries,” Burton said. “If you have surgery, or an injury, or neuropathy or cancer, the cells in your body produce quite a bit of this DAMP—but we’ve learned that HMGB1 mediates pain differently in males and females.”

The pain-signaling pathway for HMGB1 runs through a toll-like receptor (TLR) called TLR4. This protein, when activated, triggers an inflammatory response, which in turn activates the immune system. The trick, as Burton puts it, is how this occurs differently between sexes. 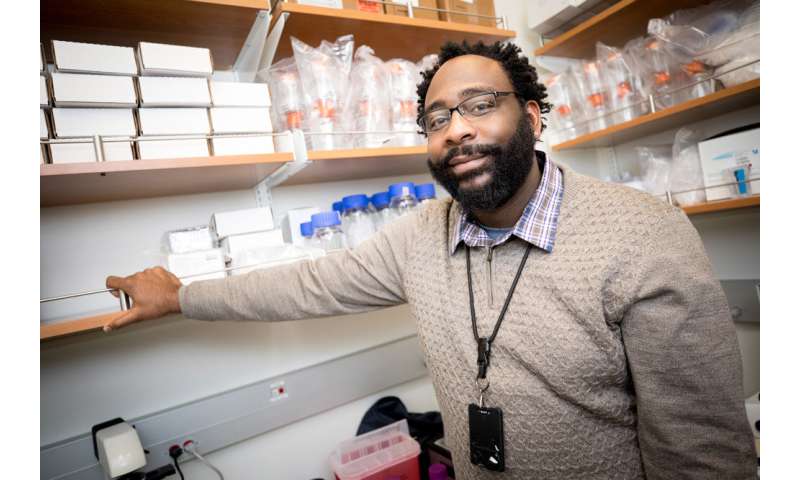 “If you don’t look specifically at where the danger signal is acting, you could simply conclude that HMGB1 creates pain in both males and females,” he said. “However, if you manipulate where that receptor is, move it into a different type of cell, you’ll notice that with one kind of cell, only males respond; and with another kind of cell, only females respond.”

Burton explained that HMGB1 production precipitates pain when particular cells pick up the signal—either a pain-sensing or pain-transducing cell, or one of several types of immune cells. Researchers found that the location of the HMGB1 production greatly influenced the duration of the response.

“The pain is generally acute and short term, which we demonstrated by making HMGB1 outside the body and then putting it in particular places in a mouse model to see if it caused pain, when, and for how long,” he said. “When we injected it in the ankle, there was a quick pain response that was transient—gone rather quickly,” Burton said. “When we injected it in the spinal cord, the response lasted five days.”

These observations emphasize that not only do different cells in the body mediate different responses to a drug, but also the same cells respond differently in one place than in another.

“That is on top of the differing responses we expected to find across sexes for what those cells do,” Burton said. “So it is both sexual dimorphisms and cell differentiation, which is why it’s hard to find therapies that work in all parts of your body regardless of your sex.”

In their study of spinal regulation of chronic pain, researchers found additional downstream differences between the male and female immune-cell responses. HMGB1 triggered roughly equal immune activation in cells from male and female mice, but cytokine expression—a specific measure of inflammation—was markedly higher in males. Upregulation of proteins that counteract inflammatory and pain responses was also unique to male cells.

“These papers cover two disparate types of pain that afflict people, differentiated by where the signal originates and how that signal interacts with particular cells to cause pain,” Burton said. “The intriguing link between the two studies is demonstrating differences in the earliest production of proteins that make a person susceptible to pain. The mechanism is the same; the onset of inflammation in pain factors is the same, but there are differences in locations in the body as well as the long-term effects.”

Understanding sex-based differences in chronic pain is critical because, according to the Centers for Disease Control and Prevention, about one in five American adults are afflicted with it.