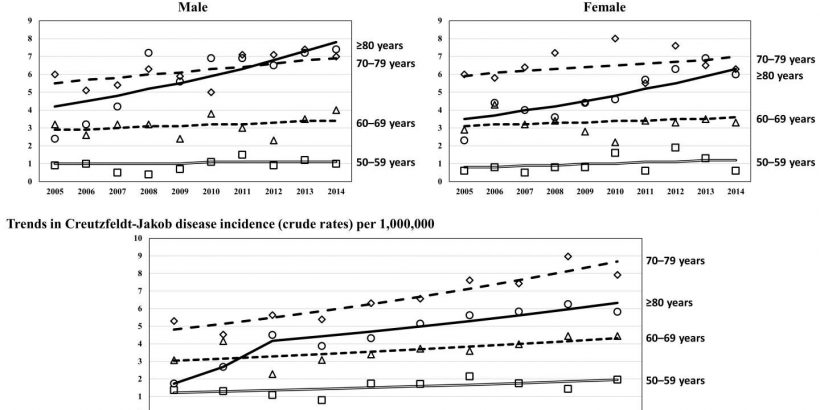 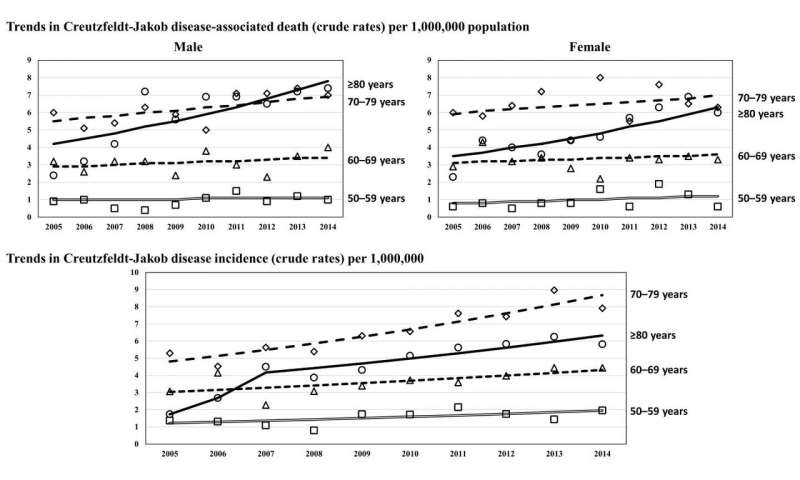 Creutzfeldt-Jakob disease (CJD) is a debilitating disorder that causes rapid degeneration of the brain as well as progressing dementia. It is a fatal disorder, often leading to death within just several years of the onset. CJD is the most common form of a human disorder caused by ‘prions,’ pathogenic agents that induce abnormal folding of specific cellular proteins in the brain called prion proteins. The major type of CJD, accounting for 85% of the cases, is called sporadic CJD (sCJD). Because sCJD mainly occurs in late-middle old age, an increase in the aging population worldwide can potentially cause a rise in CJD cases, which is a pressing global concern. Thus, to help policymakers plan ahead and establish a robust strategy, it is essential to estimate the trends of CJD-associated deaths and incidence.

To this end, a team of researchers at Okayama University, including Dr. Yoshito Nishimura, Dr. Toshihiro Koyama, and Dr. Hideharu Hagiya, conducted a trend analysis of the incidence and mortality of CJD in Japan, between 2005 and 2014. Their findings are published in Scientific Reports, a Nature Research journal. Dr. Nishimura, the first author of this study, says, “Despite CJD being a rare disease, the phenomenon of population aging may trigger a rise in the incidence and, thus, the socioeconomic and healthcare burden of CJD. Our aim was to analyze these trends, in an effort to spread awareness and spur new treatment strategies.”

For their analysis, the scientists used national vital statistics data on CJD-associated deaths among individuals aged over 50 years as well as the government-funded nationwide CJD surveillance data (from 2005 to 2014) in Japan. Their analysis revealed that, from 2005 to 2014, there was a significant increase in the absolute number of deaths, mortality rates, and incidence rates associated with CJD, even after adjusting for age. In particular, the average increase in incidence was estimated to be 6.4% per year. This trend in CJD-associated mortality and incidence rates was especially prominent in the older-age group, particularly in those over the age of 70 years. Although a previous report by the Creutzfeldt-Jakob Disease International Surveillance Network had stated that annual death rates of sCJD had risen in most participating countries in the past two decades, this study shows that Japan might have had higher CJD-associated deaths and incidence than other countries, which the scientists attributed to a rise in the aging population. Dr. Nishimura says, “The severe socioeconomic burden on caregivers due to CJD-induced dementia warrant the attention of policymakers and stress the need for a mitigative action plan with particular focus on the increase in the prevalence of dementia. In this regard, we hope that our findings can help to guide policymakers in the right direction.”