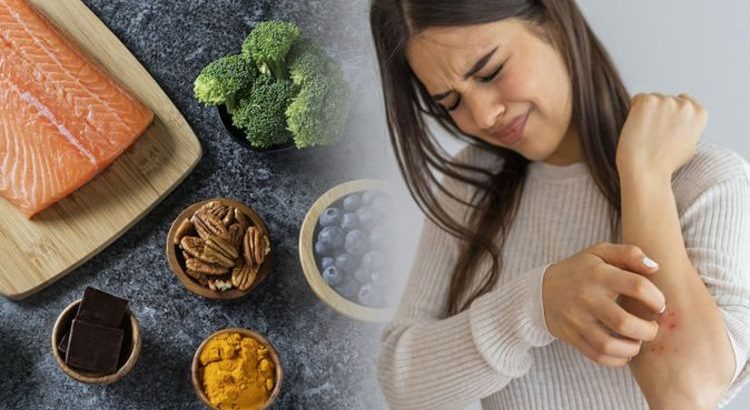 Psoriasis often heavily impacts a sufferer’s everyday live. It tends to appear on the elbows, knees and scalp, but any part of the body can be affected. Many sufferers will have tried multiple topical and systemic treatments to tackle the condition to get some relief from their symptoms.

But it can be hard and time consuming to find the right creams and formulas to work, as every case is different.

There is unfortunately no cure for psoriasis although there are several effective medical treatment options, and symptoms may also be improved by understanding specific triggers.

Dr. Daniel Glass of The Dermatology Clinic London, shares his tips on how to help naturally reduce the severity of this condition with Express.co.uk, one of which is to include oily fish in your diet.

Dr Glass explained: “One of the most frequently asked questions by patients with psoriasis is whether dietary changes can improve their condition. Although there are a limited number of controlled trials that address this question, there are some emerging trends which show some promise for psoriasis sufferers. 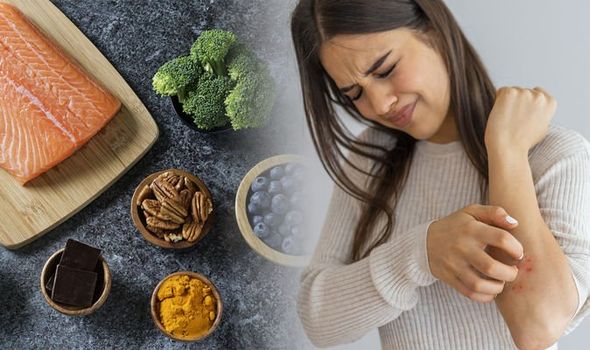 “A survey of 1206 patients with psoriasis in 2017 showed 40 percent reported modifying their diets to try to help their psoriasis. Although no single diet was adhered to by all patients the most common diets tried included gluten free diet, a palaeolithic diet, low carbohydrate/high protein diet, a Mediterranean diet and a vegetarian diet.

“Certain foods stood out as more frequently reported to affect symptoms, particularly fish oil, fruits, vegetables, and water, which were all reported by at least 10 percent of people to positively affect their psoriasis. Reductions in consumption of alcohol, gluten, nightshades, and junk foods were associated with skin improvements in at least 50 percent of patients.

“Consider increasing the amount of oily fish such as salmon, mackerel, tuna and other fish rich in omega 3 into your diet, as well as supplementing with an omega 3 capsule.  Vitamin D has also been shown to improve symptoms in some psoriasis sufferers and is one of the key ingredients of a topical cream I often prescribe to my patients.”

Dr Glass added people with psoriasis have an increased risk of also having coeliac disease and even if not diagnosed with coeliac have increased levels of anti-gliadin antibodies which is found in coeliac disease.

He advised: “Avoidance of gluten can be beneficial in a proportion of patients with psoriasis. In fact, one study of psoriasis patients who were tested positive for antigliadin antibodies found that the majority (82 percent) experienced a decrease in antibody levels and affected skin area after following a gluten-free diet.

Other ways to treat psoriasis

Leading a healthier lifestyle is another way Dr Glass recommends to help symptoms of the condition.

He said: “Although alcohol and smoking are linked to more severe psoriasis and limiting your alcohol intake or cutting out alcohol completely may well improve the severity of psoriasis. I am not aware of any randomised controlled clinical trials assessing interventions for alcohol abstinence or smoking cessation. 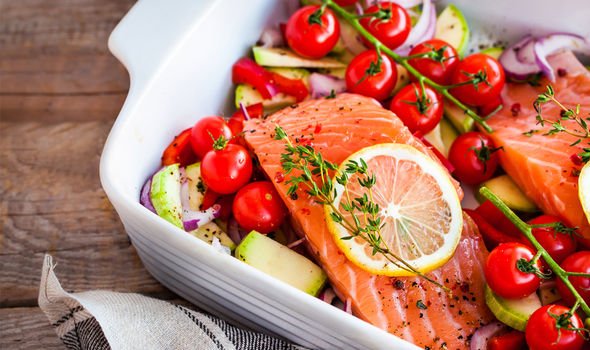 “There is also evidence to suggest that weight loss and exercise may help to improve symptoms, since obesity is associated with more severe psoriasis. Whereas dietary intervention may improve psoriasis in people who are overweight and as a result of modifications in diet then lose weight. What is less clear is the role of dietary modification in people who are not overweight.”

In addition to higher body mass index scores, Dr Glass added both poor gum health, and speech difficulties related to dental problems are correlated with more severe psoriasis symptoms particularly in children, which is another good reason to look after your teeth.

Dietary changes alone may not cause a large effect in psoriasis but may become an important addition to medical treatments.

Dr Glass said: “In most cases I would recommend a combination of topical and systemic treatments, alongside lifestyle dietary modifications to ensure the best results and to help keep your psoriasis under control.” 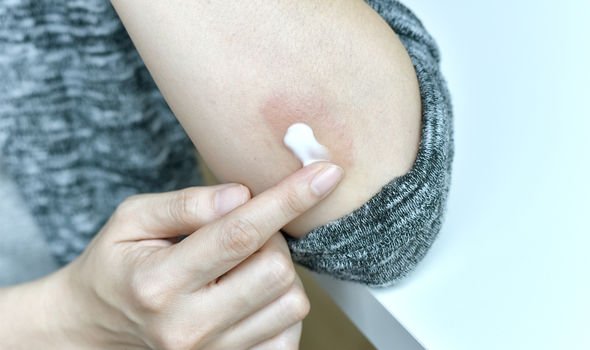 Another alternative treatment the skin expert recommends is controlling psoriasis with your mind.

He explained: “A less well-known and increasingly successful way to tackle psoriasis is to look at the psychology behind it, as there are strong documented links between the mind and the skin. For example, when we are stressed certain hormones are released, which can have a direct effect on our skin, either causing a flare up or aggravating affected areas.

“Major stress mediators which can aggravate skin disease include Corticotropin-releasing hormone, Adrenocorticotropic hormone, prolactin and substance P.  This can also be self perpetuating as in many cases, if you’re experiencing a flare up of psoriasis, this can make you feel more anxious and self-conscious, adding further to your stress and exacerbating your symptoms, resulting in a vicious cycle.

“For sufferers who need immediate relief from their symptoms, I suggest consulting with a psychologist alongside topical and systemic medical treatments, to help give them the necessary coping mechanisms for when they do have a psoriasis flare up as well as exploring stressful factors in their lives that may be contributing to flares in skin disease. Suggested psychological therapy includes Cognitive Behavioural Therapy (CBT), breathing exercises and relaxation to try to limit flare ups.”

If you suffer from psoriasis or any other skin condition, you can contact www.thedermatologyclinic.london to book an appointment with Dr Daniel Glass or another member of the team.