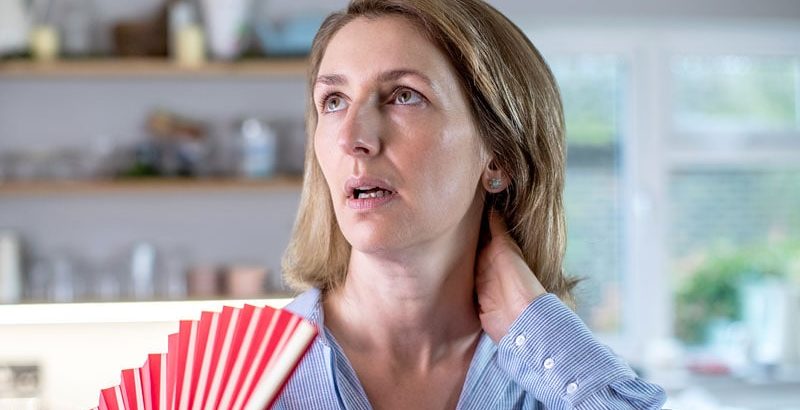 PARIS — During perimenopause, alternating periods of low and high estrogen levels mean that hormone replacement therapy (HRT) is not an option. Nevertheless, the progesterone-only treatment dydrogesterone (Duphaston) taken on 10 days per month is recommended for women with cycle irregularities to reduce to the risk of endometrial cancer, which is related to high estrogen levels, reported Sandrine Pérol, MD, a gynecologist at Cochin Hospital in Paris, at the most recent French national general medicine conference.

Progesterone replacement treatment makes periods more regular but remains ineffective in treating climacteric symptoms such as hot flashes, which occur during low estrogen phases, said Pérol. As long as the patient continues to have a period, “symptoms of low estrogen during perimenopause are very difficult to manage.” This is because the ability to have a period suggests that estrogen production has not stopped entirely.

Perimenopause precedes the menopause and is the result of significant hormone fluctuations. This timeframe, which can be “very complicated for women,” consists of climacteric irregularities (hot flashes, vaginal dryness, mood disorders, etc.) and menstrual cycle irregularities. These include very irregular, possibly heavy (menorrhagia) periods, which may last for several years before the menopause itself.

The following three phases of perimenopause have varying significance:

It should be remembered that menopause is confirmed to have started once a woman has had no period for 12 consecutive months.

Since periods of high estrogen levels are associated with low progesterone levels, they tend to cause endometrial hyperplasia, which is a major risk factor for endometrial cancer, said Pérol. High estrogen is also associated with an additional risk for breast cancer. In the ovaries, hormone imbalance promotes the formation of functional cysts.

The recommended treatment for cycle irregularities and reducing the risk for endometrial cancer is progesterone administered for 10 days per month, during the second half of the cycle, said Pérol. Replacement therapy helps regulate cycles by inducing more regular bleeding, and it also limits symptoms of high estrogen. Women who experience breast pain can be prescribed a topical progesterone treatment to be applied daily.

Pérol added that “sequential progesterone replacement therapy also has the advantage of letting us see the hormone status of the most symptomatic patients more clearly.” If bleeding does not return for several consecutive months, suggesting no further estrogen secretion, “the patient has probably started menopause.”

According to Pérol, this progesterone treatment acts as a test to assess HRT more quickly in these women, whose quality of life has been made significantly worse by the symptoms caused by hormone imbalance. “Nevertheless, we must remain vigilant for any potential signs of high estrogen.”

If estrogen synthesis persists, HRT is not indicated, since it provides estrogen (estradiol) with progesterone. When treating women with symptoms of low estrogen occurring during perimenopause, options are limited. Only topical estrogen treatments are recommended, particularly in treating vaginal dryness.

“Genitourinary symptoms tend to be neglected,” Pérol said. These symptoms, which are commonly seen from the outset of perimenopause, consist of vaginal burning and dryness, dyspareunia, sexual disorders, and urinary problems such as incontinence or chronic urinary tract infections.

The latest recommendations from the French National College of Gynecologists and Obstetricians (CNGOF) and the French Menopause and Hormonal Aging Study Group (GEMVI) are that topical estrogens should be favored in treating genitourinary symptoms caused by menopause. Prasterone (Intrarosa), an inactive steroid precursor that converts topically to estrogens and androgens, has been put forward as an effective alternative to treat dyspareunia. Lubricants, moisturizers, and hyaluronic acid administered vaginally also improve symptoms.

Women potentially in perimenopause and taking progestogen-only oral contraception or using an intrauterine device (IUD) that releases levonorgestrel (Mirena), are advised to stop taking their contraception so that their natural menstrual cycle can be assessed. “If the patient’s periods haven’t returned within 6 weeks, progesterone treatment 10 days per month can be started.”

In any event, it is preferable to keep using one type of contraception after starting progesterone replacement therapy, since the risk for pregnancy remains, said Pérol. Copper-coil IUDs or condoms are therefore recommended.

When HRT is considered after several months of amenorrhea with progesterone, a transdermal approach is favored for estrogen administration (gel or patch), said Pérol. In France, available estrogen treatments are natural in origin (17beta-estradiol). The associated progesterone is of natural (Utrogestan, Estima) or synthetic (Duphaston) origin. High-dose, progestogen-only contraceptives (pregnane and norpregnane) no longer play a role in treating menopausal women, because of the risk of meningioma.

Women who do not wish to have a period should be given combined treatment, either discontinuously (estrogen and progesterone from D1 to D25) or continuously (estrogen and progesterone every day of the month). With combined discontinuous treatments “the patient receives no hormone medication for 5 days, which is probably better for the breasts.” The continuous regimen can be prescribed if hot flashes or other symptoms return during this therapeutic window.

In any event, during menopause “progesterone must be administered at least 12 days per month to rule out the risk of endometrial cancer.” Women who have undergone a hysterectomy no longer need progestins, and HRT can be limited to estrogen only, said Pérol.

To conclude her presentation, Pérol set out the following HRT prescription, which she considers to be typical for a patient struggling with climacteric changes:

The prescription is valid for 3 months and can be renewed after further assessment. HRT must be adapted on a case-by-case basis and reassessed every year. “It’s preferable to not administer HRT for more than 5 years,” said Pérol. After this timeframe “the risk of breast cancer starts to emerge.” The maximum timeframe must not exceed 10 years.

HRT must be stopped gradually “over a period of several months, or even over 1-2 years,” by first reducing estrogen, then progesterone, Pérol concluded.

This article was translated from the Medscape French edition.