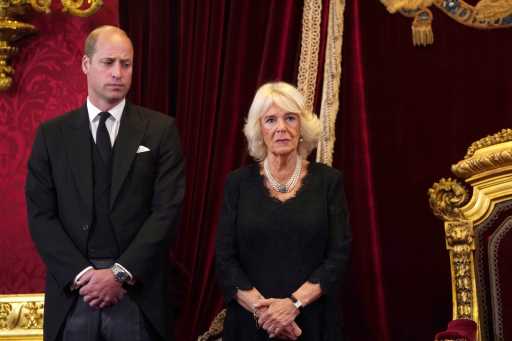 Now that King Charles III and Camilla Parker-Bowles have taken their thrones as head of the British monarchy, Prince William has moved up in the line of succession. But he has set one very clear boundary between the Queen Consort and his kids Prince George, 9, Princess Charlotte, 7, and Prince Louis, 4, who he shares with Kate Middleton. And it’s one that honors his late mother Princess Diana.

In royal author Angela Levin’s new book, Camilla: From Outcast to Queen Consort, the biographer reported that Prince William was direct in informing Camilla that she would not be known as “step-grandmother” to his children.

“William has made it clear that Camilla is the wife of his father, but not a step-grandmother to his children,” the royal author said, per InStyle, adding that Prince George, Princess Charlotte, and Prince Louis know that they have “two grandfathers but only one grandmother.” These grandparents are, of course, King Charles on their dad’s side and Michael and Carole Middleton on their mom’s side.

Levin continued, “William and Harry were 23 and 20, respectively, when Camilla officially became their stepmother in 2005. She was more of a friendly grown-up they saw occasionally at royal gatherings. She tried to be encouraging rather than influential.”

This is every parents’ right! He isn’t disrespecting her by saying she isn’t a grandmother to his kids. He’s simply honoring his late mother and keeping her memory alive for his kids, so they don’t get confused. Good for him for making that decision and setting the clear boundary!

For her part, the Queen Consort is reportedly fully respecting the boundary, according to Levin, who wrote, “Nor has she tried to take over any responsibility as a step-grandmother to the Cambridges’ children, Prince George, Princess Charlotte, and Prince Louis. Especially as Catherine’s parents, Carole and Michael Middleton, are so close.”

Tensions have risen between Prince William, Prince Harry and Camilla in the past. When the late Queen Elizabeth II announced that Camilla would be given the Queen Consort title, they reportedly struggled with it.

“The boys were completely blindsided by this,” Christopher Anderson, author of Brothers and Wives: Inside the Private Lives of William, Kate, Harry, and Meghan, told Us Weekly in Feb. 2022. He added that their grandmother’s decision was “driving a wedge” between the generations at the palace.

Prince Charles reportedly campaigned “relentlessly” for his wife to gain the title, even though one of the Queen’s conditions for his second marriage was that “he promised Camilla would never be called Queen Consort.”

However, the Queen did grant her permission, something the Royal Family has reiterated on their Instagram account, with a slide showing a picture of Camilla and the late Queen. It includes a quote from Elizabeth, who said, “ “It is my sincere wish that, when the time comes, Camilla will be known as Queen Consort as she continues her loyal service.”

Family drama is always complicated, especially in the House of Windsor. Hopefully it will all be cleared up on coronation day on May 6, 2023.

Even royal kiddos love to be read to! Here are some of their favorites.