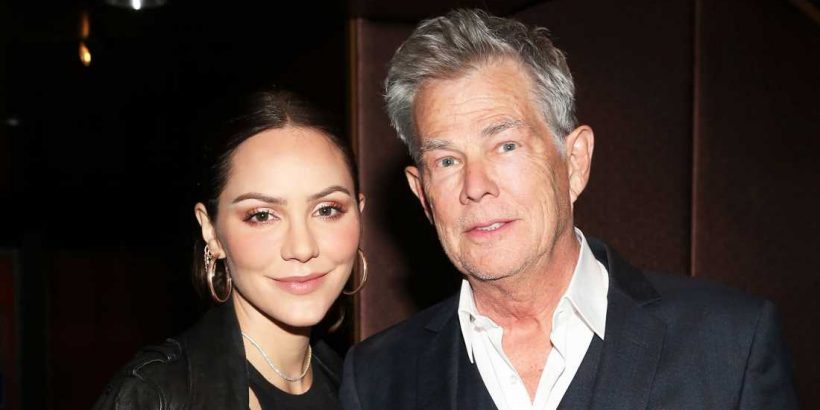 A sweet stroll. Pregnant Katharine McPhee went on a walk in Beverly Hills with her husband, David Foster, on Monday, December 21.

The American Idol alum’s baby bump was on display in a green top and black leggings, in photos obtained by Daily Mail. She carried her dog in one arm, while the composer, 71, walked beside her in a gray sweatsuit. The couple both wore face masks.

Us Weekly confirmed in October that the actress, 36, is pregnant with her and the Canada native’s first child together. (Foster is already the father of five daughters — Allison, 50, Amy, 47, Sara, 39, Erin, 38, and Jordan, 34.)

McPhee subtly addressed the news the following day when showing off her gift from Aperol Spritz. “I won’t be drinking this anytime soon, wink, wink,” the Los Angeles native wrote via Instagram in October. “But, I’m very excited! Who’s coming over for an Italian-inspired cocktail?”

While the “Over It” singer was spotted out and about in November, showing her budding belly in a white skirt, she didn’t debut her pregnancy progress via Instagram until the following month.

The Broadway star appeared to hint at the sex of her baby-to-be in the December social media upload, which was captioned with blue heart emojis. The pregnant star cradled her stomach in a blue coat in the mirror selfie.

“My most AMAZING and BEAUTIFUL GLOWING wife,” Foster commented on the post.

He proposed to the Smash alum in June 2018, and they tied the knot the following year in London. McPhee previously wed Nick Cokas in 2008, finalizing her divorce from the actor, 55, in 2016.

Famous Fathers Who Had Kids Late in Life

The music executive and McPhee have “such great chemistry,” a source exclusively told Us in October 2017 after the couple stepped out for the first time. “They … really connect organically on so many levels.”