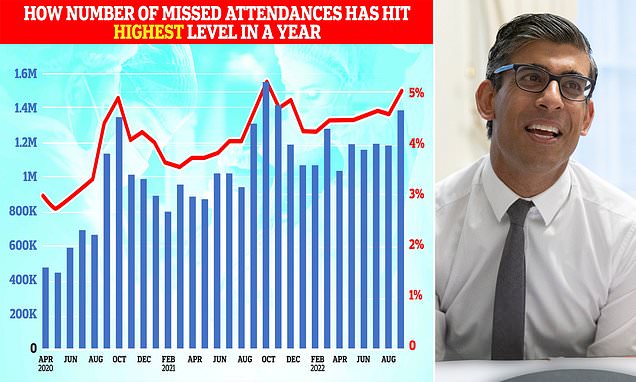 Rishi Sunak has ditched one of his Tory leadership campaign pledges to fine patients who miss GP and hospital appointments £10.

The Prime Minister today backtracked on the plan, which he outlined in his first attempt at leading the country this year, after it was criticised by health leaders.

Mr Sunak believes Britons ‘should not be missing their appointments’ but admitted ‘now is not the right time’ for the policy, a Downing Street spokesperson said.

The comments come after official figures this week revealed that GP appointment no-shows are near record levels. More than £100million could have been raised this year if each was fined £10.

The PM had previously argued that it was ‘not right’ that some patients were failing to turn up and ‘taking those slots away from people who need’ them.

But the British Medical Association said the fine would ‘make matters worse’ and threaten the principle of free NHS care at the point of need. 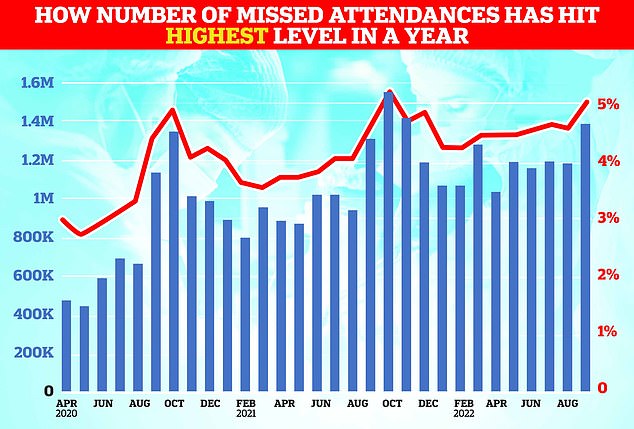 Almost 1.4million GP appointments were missed in September this year, according to official NHS data. It is the highest monthly toll since November last year (1.43m) 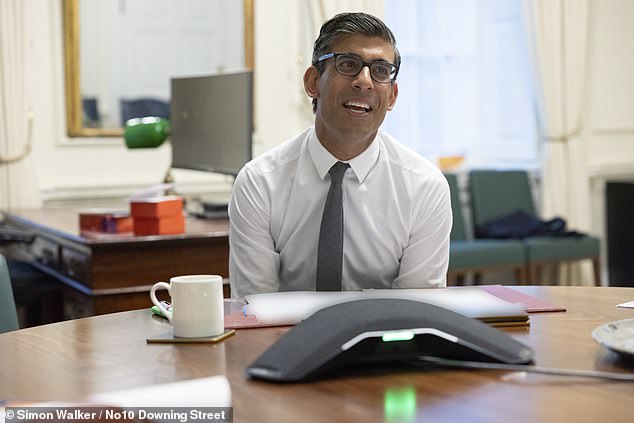 Rishi Sunak today backtracked on his plan to charge GP appointment no-shows in England £10, with his spokesperson admitting ‘now is not the right time’

A Downing Street spokeswoman today said: ‘The PM wants to deliver a stronger NHS and the sentiment remains that people should not be missing their appointments and taking up NHS time.

‘But we have listened to GPs and health leaders and have acknowledged that now is not the right time to take this policy forward.’

The comments mark a U-turn, after a spokesperson this week told the Daily Telegraph that Mr Sunak ‘stands by the sentiment’ of the pledge.

However, the move had to be discussed with newly-appointed Health Secretary Steve Barclay first before the commitment could be confirmed.

When he first raised the plan, Mr Sunak acknowledged it was controversial but said it was necessary to stop doctors’ time being wasted.

Mr Sunak said: ‘Under my Government there will never be charges for care in our NHS. But I will charge people who waste valuable NHS time by booking appointments and failing to attend.’

Under the plan people would have been fined from the second appointment they miss, with the patient ‘given the benefit of the doubt’ the first time they missed one.

He proposed it be put in place until the growing NHS backlog caused by the pandemic was ‘reduced to manageable levels’.

Mr Sunak had announced the plan in July as part of his ‘transformative’ shake-up of the NHS, as he was battling Liz Truss to succeed Boris Johnson.

But now he has succeeded Ms Truss after her brief time in No10, Mr Sunak was not standing by the promises of the first campaign.

More than 15million appointments are not attended by patients at GP surgeries every year.

Half of these are with busy family doctors, which means that 1.2million hours of their time go to waste every year.

The annual cost of missed appointments is £216million, enough to pay the annual salaries of 2,325 full-time GPs, according to the now Prime Minister’s campaign.

In the summer the British Medical Association, the union representing doctors, condemned the plan to fine people £10 for missing an appointment.

In response to the missed appointment data, Dr Farah Jameel, chair of the BMA’s GP committee, said she ‘strongly encourages patients to do their best to attend their GP appointments’.

However, she said: ‘There are many reasons why someone might not attend their appointment though, which is why a one-size-fits-all approach of charging them will not work — and could actually increase pressure on staff by creating another, unnecessary administrative burden and lead to increased anxiety on the part of many patients.

‘Charging for missed GP and hospital appointments would not only undermine the essential trust between doctor and patient, but also threaten the fundamental NHS principle of delivering care free at the point of need.’

Professor Martin Marshall, chair of the Royal College of GPs, said: ‘It’s always frustrating to hear about missed GP appointments, particularly at a time when we have nowhere near enough GPs to meet increasing need for our services, as these could have been used for other patients.

‘But charging for appointments is not the answer.

‘It would fundamentally change the principle that the NHS is free at the point of need and would likely impact on our most vulnerable patients most — and it would add another layer of bureaucracy to a GP service already drowning in red tape.’