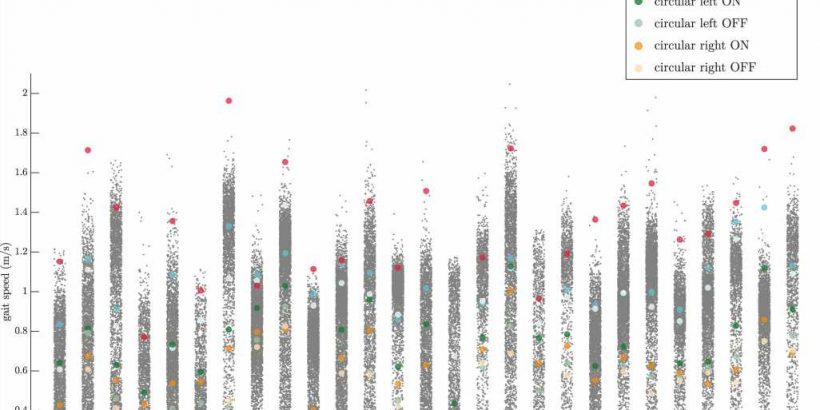 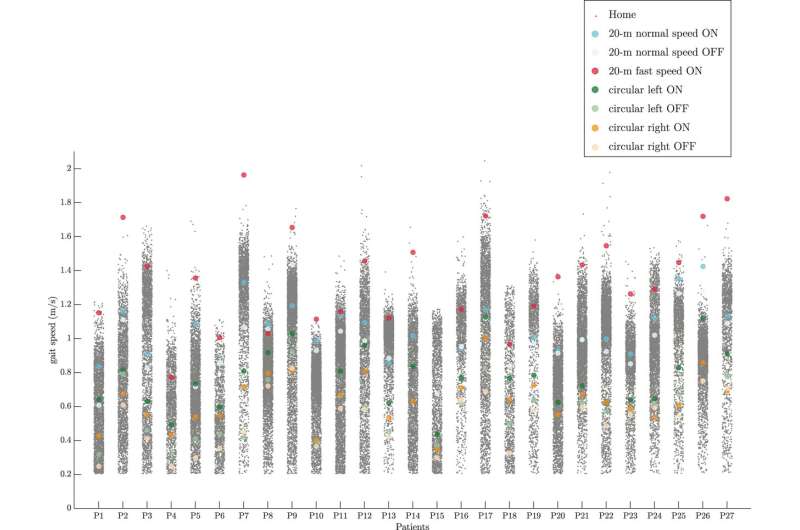 EPFL scientists have developed algorithms that, combined with wearable sensors, could help clinicians to monitor the progression of Parkinson’s disease and assess the effects of medications commonly used by people with this neurodegenerative disorder.

Parkinson’s disease affects neurons in an area of the brain that controls movement, causing tremors, difficulty walking and other motor problems. Doctors caring for people with Parkinson’s disease need to be able to assess the severity of the symptoms and alter the doses of medications that reduce such symptoms. To do so, clinicians rely on a handful of tests, such as those that measure gait speed—or how fast people walk. However, these tests are typically conducted in the clinic once every few months, and results can be affected by several factors including the experience of the person conducting the assessment.

Scientists have known that gait speed in real-life conditions is a better proxy for assessing the mobility of people with Parkinson’s disease. Gait speed is often said to be the sixth vital sign, just as important as blood pressure and heart rate, and it is crucial for people’s independence in performing daily activities such as housekeeping and shopping. Gait speed has been also linked to life expectancy. “If you walk faster, you can expect to have a longer life,” says Kamiar Aminian, a Professor with the Institute of Bioengineering and the Director of the Laboratory of Movement Analysis and Measurement at EPFL.

So, Aminian and his colleagues set out to analyze how gait speed is affected in Parkinson’s. The Centro Hospitalar Universitário do Porto in Portugal, which is a partner of the project, recruited 27 people with Parkinson’s disease and provided each of them with a foot-worn sensor that recorded how fast they walked. During the clinical assessment, the researchers asked patients to do two types of walking tests: in one, people had to walk for 20 meters in a straight line; in another test, they were asked to walk in circles for five times. The walking tests were done when patients were on a medication that reduces motor problems, and then they repeated when individuals were off the medication. Based on data collected from the sensors, Aminian’s team at EPFL calculated the average and the fastest gait speed for each individual.

“Daily activities can give us more information and tell us what is happening in real life, so we asked the patients to go home and wear the sensor for one day,” says study lead author Arash Atrsaei, a Ph.D. student in Aminian’s group. Using reliable algorithms that analyze motion data from the sensors, the researchers were able to monitor patients’ gait speed around the clock and in an objective manner.

The team found that, on average, patients have the same walking speed at home and in the clinic. The analysis also suggested that people tended to move at a slower pace during short walking bouts, for example when they took a few steps and then stopped to do a different task, and at a faster pace during walking bouts that lasted more than one minute and occurred mostly outdoors.

During daily activities, some patients walked even faster than the maximum speed at which they walked in the clinic. These so-called ‘exceptional strides’ typically occurred between 30 minutes and three hours after patients had taken their medication, the researchers found. “We can really see the effects of medication by measuring the gait speed,” Atrsaei says. The study was published in npj Parkinson’s Disease.