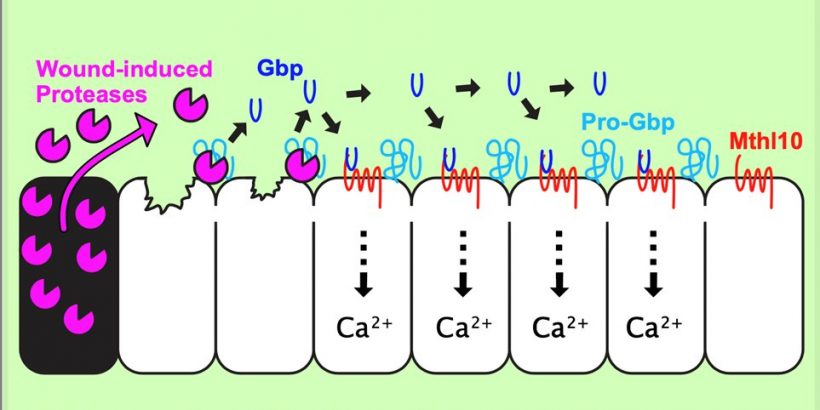 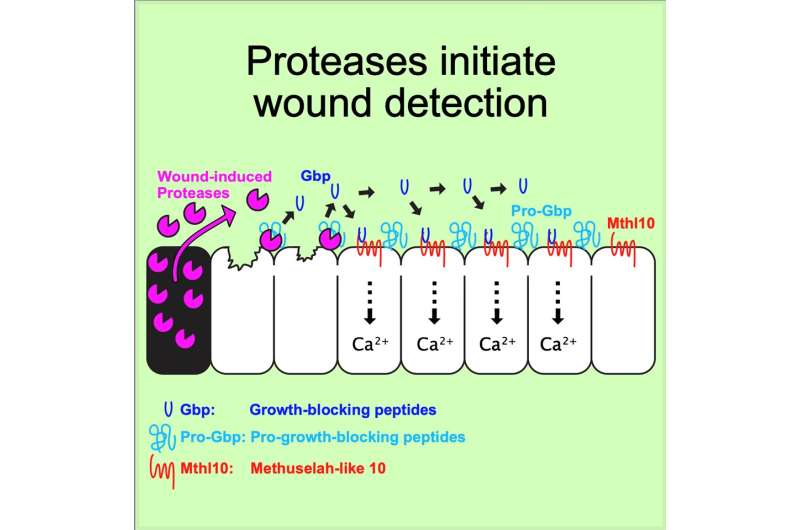 A new study from Vanderbilt University researchers has established a novel way to understand how the body discovers and responds to wounds. The research was led by graduate student James O’Connor and Professor Andrea Page-McCaw in the Department of Cell and Developmental Biology, and Shane Hutson, chair of the Department of Physics and Astronomy and professor of physics and biological sciences.

Cells that cover the body and its organs, known as epithelial cells, must be able to heal wounds, as they are uniquely subjected to all kinds of insults and abrasions. “When these cells detect a wound nearby, they change their behaviors,” said Page-McCaw. “They transition from stationary, nondividing, noninvasive cells to cells that migrate, divide and invade.” This also describes the behaviors of cancer cells, which adopt wound-healing behaviors without any wound.

The trans-institutional team of scientists started by looking into the earliest known response of epithelial cells to a nearby wound: an increase in calcium levels. This increase typically occurs within a minute of wounding.

“We were able to connect the response of these cells directly to the cellular damage inherent in wounding,” Page-McCaw said. “We found that wounds destroy cells, causing them to leak or even burst, and some of their contents gets out. Outside of cells, tissues have a detector molecule ready to sense these cellular contents. When they do, proteases in the cellular contents chop up the detector molecule into smaller pieces, which spread to nearby cells. This activates receptors on the cells’ surfaces, giving them the information that a wound is nearby.”

The multidisciplinary collaboration with Hutson’s lab brought the convergence of experimental biology and theoretical mathematical modeling together. “James O’Connor led the experiments,” Page-McCaw said, “and we worked collaboratively with the Hutson lab to analyze the data quantitatively. Aaron Stevens, graduate student in the Hutson lab, generated a mathematical model that showed this scenario is plausible if the cells release their contents slowly, rather than all at once. This finding was an interesting aspect that we had not noticed, but we were able to go back and see evidence for such a slow release.”

Successful and efficient wound healing is an important aspect of bodily recovery from trauma or surgery. This research brings us closer to a full mechanistic understanding of how wounds are recognized by epithelial cells and how this leads to wound healing. A foundational understanding of this behavior is essential to developing therapeutics that can address this health issue.

Slow wound healing time can be caused by many factors, leading to infection and declining health. Healogics, the nation’s leading provider of advanced wound care, sponsors an annual Wound Care Awareness Week in June that recognizes the “nearly 7 million people in the United States living with a nonhealing wound.” Healogics notes that “the prevalence of chronic wounds is growing in tandem with an aging population and increasing rates of diseases, such as diabetes and heart disease.”

Additionally, by figuring out how to downregulate these wound-healing behaviors in combination with other cancer interventions, this work offers insights that could help combat cancer’s adoption of this mechanism.