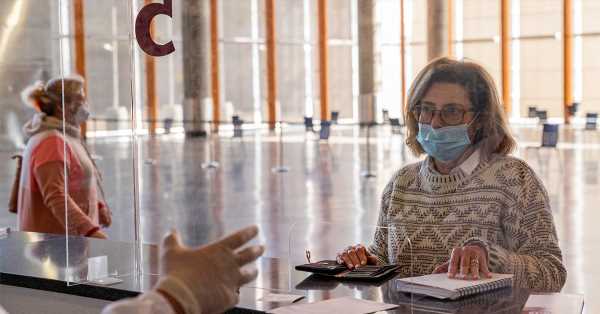 You can’t test everybody if you don’t have enough tests.

And if you don’t have enough tests, then you need to make some difficult decisions on who you’re going to test.

Some states and federal officials are making those tough choices.

In California, New York, and other parts of the United States hardest hit by COVID-19, health officials are prioritizing testing for only healthcare workers and people with severe illnesses.

Over the weekend, members of the White House Coronavirus Task Force said priority of testing should go to those who are already hospitalized, residents of long-term care facilities who are showing symptoms, healthcare workers, and people over the age of 65.

“Unfortunately in the U.S., we’re way behind many other countries in testing availability, so it’s perfectly appropriate to test the most important samples — the samples from patients who are the sickest who you need to make decisions for their treatment,” Dr. Dean Blumberg, chief of pediatric infectious disease at the UC Davis Children’s Hospital, told Healthline.

“Testing is one of our most important tools in the control of any infectious disease. We want to test people who are first responders and people who are healthcare workers so we can document that they don’t have infection so they can go back to work,” Dr. Jeffrey Klausner, an infectious disease specialist at the University of California, Los Angeles, told Healthline.

“We want to find cases of infection so we can isolate those cases and then based on the severity of the disease either treat them… or counsel them on how to effectively take care and monitor themselves in isolation. Testing is critical and testing capacity is increasing every day,” Klausner said.

How to prioritize tests

As for prioritizing cases that most need testing, Blumberg says commercial laboratories aren’t equipped to do that.

“The rolling out of the tests in the commercial laboratories has not allowed prioritization of testing because the commercial labs have no way of knowing which tests are more important than others, while a public health laboratory would know, they can set up strict criteria for submission of the test,” he said.

As a matter of priority, Blumberg argues widespread testing needs to be made available, as does a quick turnaround time for testing.

“The testing is kind of shining a light on the situation. If you don’t have the testing, you don’t know where the disease is, you don’t know how many people are infected,” he said. “It’s very difficult to prepare, so you’re really acting in the dark and without data. We need data. We need to know where there are hot spots in the U.S. We need to know where we’re going to expect a surge of infections, so I really wish we did have more widespread testing availability sooner.”

Earlier this month, President Donald Trump said, “Anybody that wants a test can get a test.”

However, Dr. William Schaffner, an infectious disease expert at the Vanderbilt University Medical Center in Tennessee, says that is yet to be seen in reality.

“Statements like that have been made by senior political officials in the U.S. and I don’t know of a single location in the country where that is available at the present time,” he told Healthline.

Schaffner says people who might appear well still want to be tested and there’s confusion surrounding whether or not that can happen.

“There’s a great conflict there… and lots of questions are raised about why it is they can’t be tested when they have been told a week and a half ago they can be tested,” he said.

It doesn’t help, Schaffner says, that messaging from government officials surrounding testing, and COVID-19 in general, has often been unclear.

“It’s been difficult and greatly confusing. Even when the presidential task force holds a news conference, some senior political officials will say things that then have to be diplomatically modified or corrected right at that news conference. That has caused all kinds of confusion,” he said.

The case for self-testing

Right now the Food and Drug Administration (FDA) requires testing samples for COVID-19 to be collected by healthcare professionals.

The best practice is for those professionals to wear masks during collection.

However, healthcare workers have reported that mask supplies are running low.

Klausner says that one solution that would use fewer masks is self-testing.

“There is absolutely no reason why people can’t collect their own specimens. We need to be a little bit more open-minded and innovative and realize [that] people can safely and accurately collect their own specimen from their throat — those are excellent specimen types for testing — and then they can hand the specimen in the tube to the healthcare worker who can then take it to the laboratory, and there doesn’t have to be this excess utilization of personal protective equipment and masks just for specimen collection,” he said.

As hospitals prepare for a sharp rise in patients in the coming weeks, health officials are moving to conserve ventilators, intensive care unit (ICU) beds, and masks.

“We’re at the phase where there’s an exponentially increasing number of cases, so you have to think about how this might overwhelm healthcare systems and how we don’t want to do that. We want to make sure out healthcare systems are available to accept patients, to take care of the sickest patients. In order to do that, we need to prioritize where the resources need to be,” Blumberg said.

In some parts of Italy, doctors in overwhelmed healthcare systems are faced with difficult decisions about who to ventilate and who to turn away.

Schaffner says if hospitals in the United States run out of ventilators and ICU beds, it’s possible some parts of the country could end up in a similar situation.

“There could be places within the U.S. that could approach that, and we’re very worried about that,” he said. “If we do get to that point, we will have people on gurneys in hospital emergency rooms and in corridors receiving ‘quick and dirty care.’ We will see people who can’t access care. We will see people with other illnesses — heart attacks, for example — and major traumas unable to get into hospitals because they’re all full and we’ll have exhausted healthcare workers.”