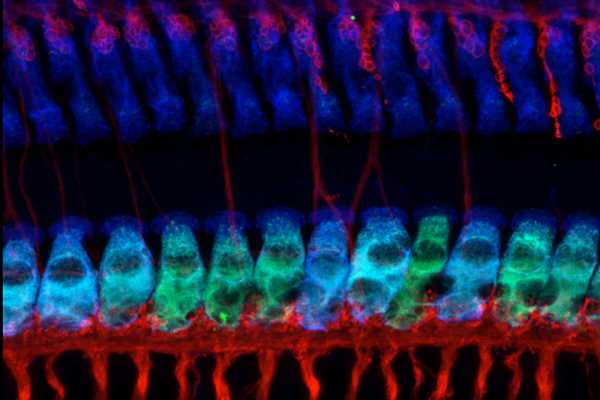 Loud noise can damage the inner ear and cause hearing loss. Studying mice, researchers at Washington University School of Medicine in St. Louis and the University of Iowa have shown that a drug compound can block damage caused by loud noise, raising the possibility of medication that prevents noise-induced hearing loss.

The study is published the week of Feb. 3 in the Proceedings of the National Academy of Sciences.

The spiral-shaped cochlea of the inner ear is responsible for detecting sound. Inner hair cells lining the cochlea transform the mechanical vibrations of sound waves into chemical signals. These chemicals — primarily one called glutamate — are then released from the hair cells and received by glutamate receptors on the auditory nerve fibers that then send electrical impulses to the brain. There, the signals are interpreted as language, music or signs of danger, for example.

The junction between a hair cell and a nerve fiber is called a synapse. Loud noise can release too much glutamate, overwhelming the glutamate receptors, which leads to loss of synapses and, eventually, a condition called sensorineural hearing loss. More than 460 million people worldwide live with hearing loss that negatively impacts their daily lives, according to the World Health Organization. By 2050, that number is projected to increase to more than 900 million.

“Sensorineural hearing loss is the most common sensory deficit worldwide, and there are no medicinal treatments for preventing it,” said co-author Mark A. Rutherford, PhD, an assistant professor of otolaryngology at Washington University. “Glutamate receptors are essential for hearing, but overstimulating them can lead to irreversible damage to synapses. What we have found is that glutamate receptors are not all the same, allowing us to block some while leaving others unblocked. When we blocked one subclass of glutamate receptor while leaving the other active, we prevented the damage while maintaining hearing function.”

These two different types of receptors — those that allow calcium to pass through and those that don’t — are present at the same synapses. Normally, both are activated when transmitting sound information to the auditory nerve. Rutherford and his collaborators at the University of Iowa found that a compound called IEM-1460 blocks the portion of these receptors that allows more calcium to pass through. In doing so, they prevent the damage, but the receptors that are not blocked allow hearing to continue.

Blocking all of the receptors would, in theory, protect hearing but also cause temporary deafness — perhaps similar to the effect of wearing ear plugs. This perhaps would be helpful for long-term hearing preservation but not ideal in situations where people are exposed to dangerous levels of noise but still need to hear what is happening around them.

“For military personnel going into combat, for example, it’s important to find a way to protect hearing from noise damage while still allowing them to hear in that moment,” Rutherford said. “We showed that this compound selectively blocks the receptors responsible for the damage, while allowing other receptors to continue working normally so there is little interference with the hearing function.”

Said senior author Steven H. Green, PhD, of the University of Iowa: “Even moderate noise can cause damage to these synapses, and the damage accumulates as we age. With our aging population, the number of people living with disabling hearing loss is increasing rapidly. This is the motivation behind our labs’ collaboration: We are seeking preventive therapies that can protect this vital sensory function in the setting of damaging noise levels while still letting people hear as they normally would.”

For this preliminary study in mice, a surgical procedure was used to apply the drug directly into the inner ear in a continuous flow. With potential therapies in mind, future work involves examining whether delivery of the drug by injection or orally or by placing it into the ear canal, in the form of ear drops, for example, or some combination of delivery methods could achieve the same effect. The IEM-1460 compound has never been tested in people, but it has been safely administered to small mammals as well as nonhuman primates in other types of neurobiology research, according to the investigators.