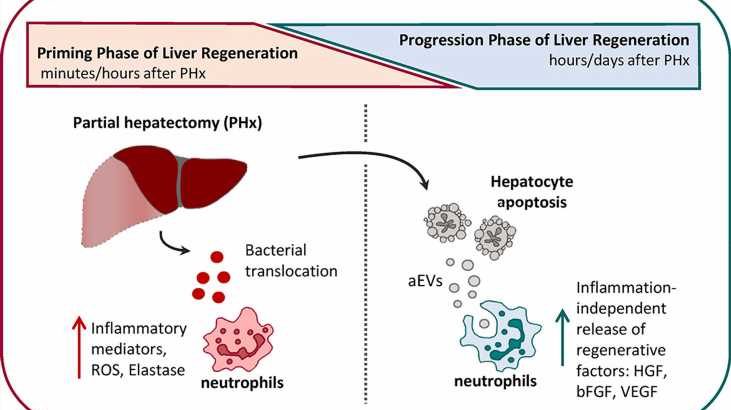 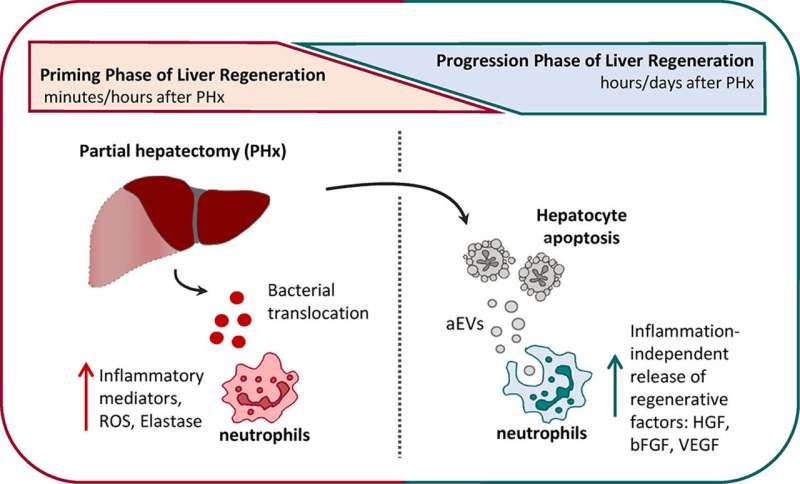 If liver tissue has to be removed due to cancer or another liver disease, the organ usually regenerates quickly, soon becoming fully functional once again. Medical science has not yet completely understood the complex processes that enable tissue recovery following resection. Now, for the first time, a MedUni Vienna research team has discovered the vital role of immune cells that boost the production of liver cells. The results were recently published in the Journal of Hepatology.

During their investigations, the research team, led by Rudolf Oehler and Patrick Starlinger from MedUni Vienna’s Department of General Surgery, identified a previously unknown dual function of neutrophils. This special population of white blood cells appears on the scene after the removal of liver tissue (partial hepatectomy, PHx) and has been shown to play a key role in regeneration.

Scientists were already aware that neutrophils play an essential part in the initiation of liver regeneration following a PHx by initially appearing in local inflammation. In the course of their study, the MedUni Vienna researchers have now discovered that these immune cells change rapidly and subsequently produce factors that the liver requires for growth. “In identifying the dynamic role that neutrophils play in liver regeneration, we have discovered an immunological mechanism that may well be involved in the repair of all tissue damage in the body,” says Rudolf Oehler, outlining one of the key findings of the investigation.

The researchers arrived at their findings by analyzing the blood of 124 patients preoperatively and on the first and fifth days after partial hepatectomy. “In the dual function of neutrophils, we have found an answer to the question of why the liver can regenerate so quickly after such a serious intervention as liver resection,” adds Patrick Starlinger, referring to the major contribution the immune system makes to this process.