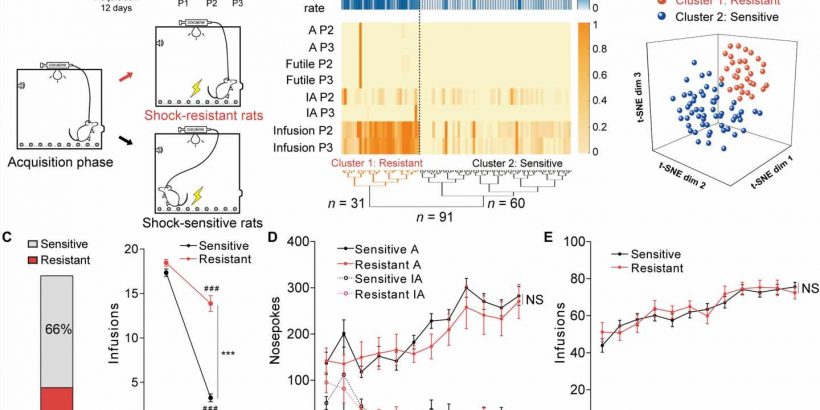 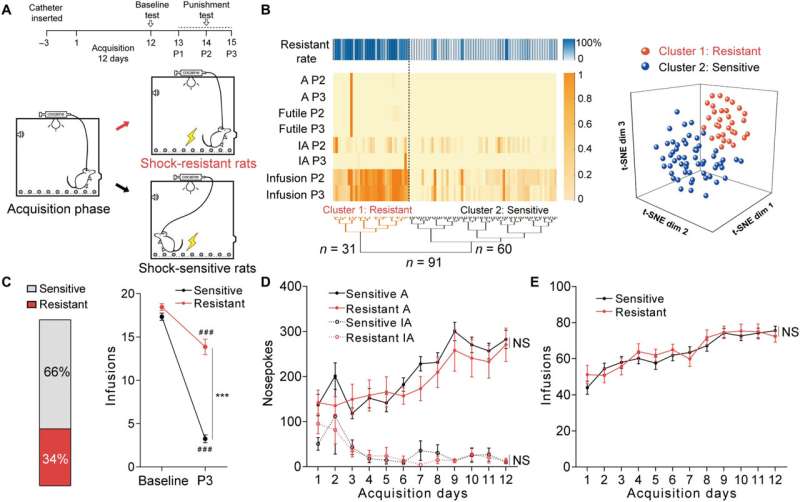 Drug addiction is characterized by compulsive drug use among individuals despite adverse consequences underlying such tendencies. However, the specific neural circuits underlying the mechanisms of addictive behavior remain unidentified. In a new study now published in Science Advances, Yang Chen and a research team in medical sciences, biomimetic drugs, and neuroscience in China conducted several experiments with animal models to understand specific neural mechanisms behind cocaine addiction.

During the experiments, they implemented a footshock-triggered method of cocaine self-administration among the rats to assess the variability of rodent behavior during the process. The outcomes showed how rats with compulsively habitual cocaine use presented increased neural activity of the anterior insular cortex (aIC) when compared with non-compulsive rats.

Chen and colleagues recognized the chemogenic manipulating activity of neurons in the anterior insular cortex (aIC), which received inputs from the orbitofrontal cortex (OFC) during compulsive cocaine use. When they suppressed this OFC-aIC neural circuit, the rat behavior changed from triggered compulsive activity to display sensitivity. This work showed how the aIC glutamatergic neurons and the orbitofrontal cortex-anterior insular cortex facilitated a shift towards compulsive cocaine use, which can serve as a therapeutic target to prevent drug addiction.

The insular cortex of the mammalian brain

Compulsive drug addiction is characterized by persistent drug use regardless of negative consequences surrounding a user’s addictive behavior. Epidemiological studies have revealed individual differences among users during the development of drug addiction. Neuroscientists have recognized the insular cortex to be involved in a spectrum of drug addictive behavior. Interestingly, smokers with insular cortex damage can undergo smoking disruption, allowing them to discontinue smoking. However, implications of the insular cortex during compulsive drug seeking behavior remain unknown. 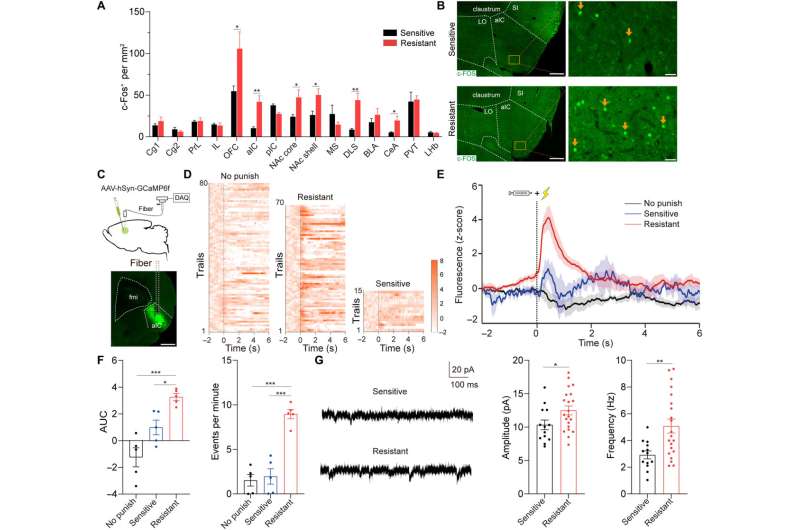 The research team conducted experiments with the rats who were trained to self-administer cocaine across 12 days. Under the conditions of freely available cocaine use, rats learned to compulsively self-administer the drug. When the team introduced three days of an hour of footshock-triggered drug administration, they observed that approximately 34% of the rats were shock resistant, while 66% were shock sensitive.

The cocaine-sensitive rats quickly reduced self-administration of the drug, while those resistant to the dose kept administering the drug despite the trigger. Further analysis showed the anterior insular cortex neurons of the shock-resistant rats to be hyperactive. The researchers performed specific neural activities to examine the activation of anterior insular neurons in the two groups of rats via trigger assays.

The team first studied the c-Fos protein expression specific to brain development in several nonspecific brain regions involved with drug addiction. The rats presenting with drug resistance had an increased number of c-Fos positive neurons in the anterior insular cortex, the orbital frontal cortex, nucleus accumbens and in the central amygdala, in comparison to sensitive rats.

While the team positively stained neurons for this protein of interest, they could not be differentiated between drug resistant and sensitive rats in the parietal insular cortex, indicating their exclusion during compulsive cocaine use within the specific brain regions. The team additionally confirmed the relationship between the activated anterior insular cortex neurons and compulsive cocaine use with further experiments to highlight a connection between cocaine use and hyperactivity of the neurons. 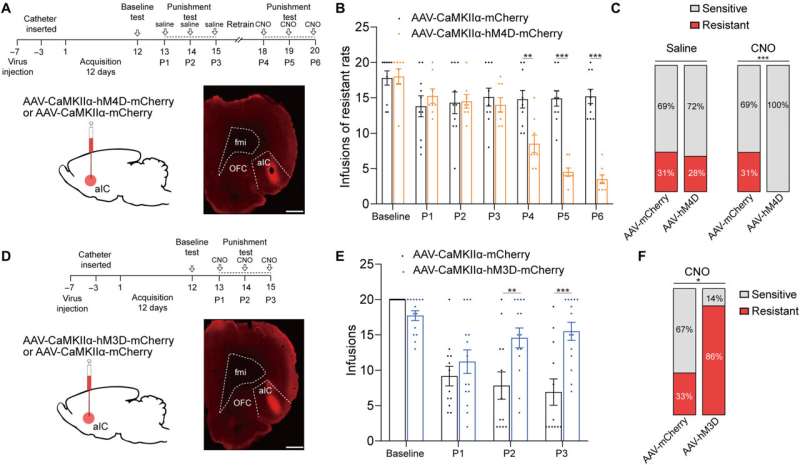 Further studies showed how the anterior insular cortex received direct inputs from the orbital frontal cortex (OFC-aIC axis). The team used a viral vector system to study the implications of the OFC-aIC pathway during compulsive cocaine use between sensitive and resistant rats. The outcomes highlighted the significance of activating the neural circuit for compulsive drug use. 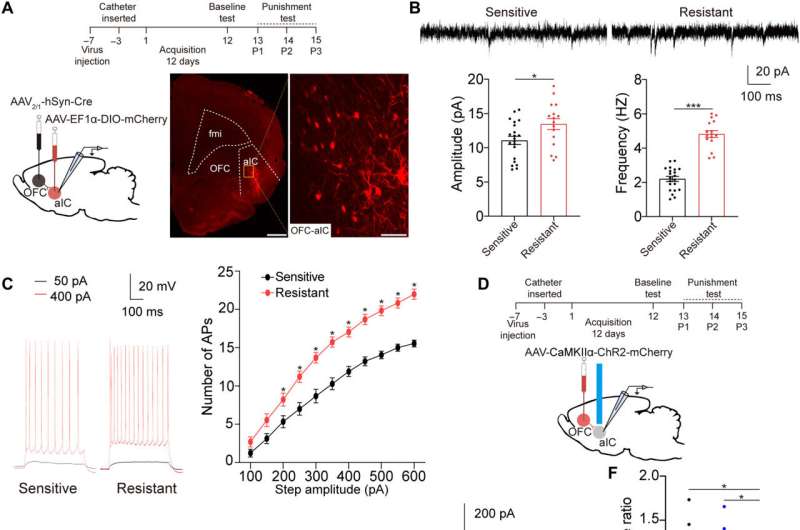 In this way, Yang Chen and colleagues used animal models to show the gating role of glutamatergic neurons of the anterior insular cortex (aIC) and the orbital frontal cortex- anterior insular cortex (OFC-aIC) circuit, during the regulation of compulsive cocaine use. The outcomes highlighted how patients with insula damage could easily quit smoking. The findings can add to the understanding of compulsive drug addiction and the design of related therapies to attenuate the tendency.