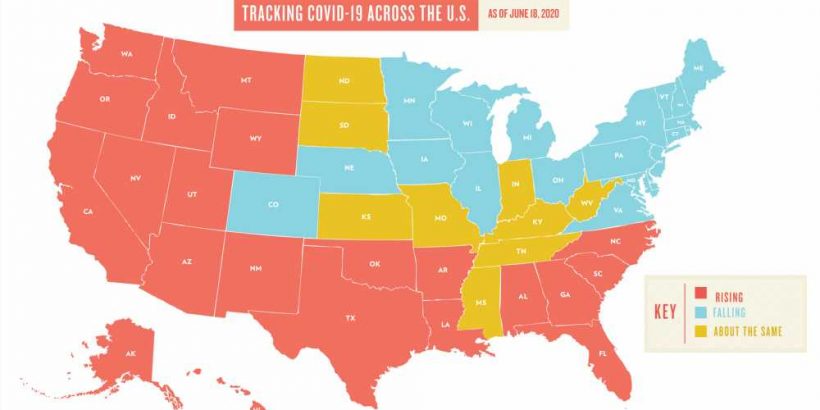 Experts are warning that the southern state has "all the markings of the next large epicenter of coronavirus transmission," according to a team of scientists at Children’s Hospital of Philadelphia and the University of Pennsylvania, CNN reported.

"The potential for the virus to take off there is very, very nerve-racking and could have catastrophic consequences"due to state's older population Dr. Jeanne Marrazzo, director of the division of infectious diseases at the University of Alabama at Birmingham told the outlet.

Arizona similarly reported a new single-day high with 2,519 new cases on June 18, while officials in Texas are also warning residents that cases are rising swiftly throughout major cities like Houston, Dallas and San Antonio.

Last week, one of Houston county’s top elected officials, Judge Lina Hidalgo, warned that the community was “on the precipice of a disaster," the Houston Chronicle reported.

In Utah — another state seeing a rise in cases — Dr. Angela Dunn, the state's epidemiologist, said she traced Utah's resurgence to the start of the reopening, which began before Memorial Day.

“The timing directly correlates with our loosening up restrictions,” Dunn told the Times. “That definitely has something to do with it.”

Meanwhile, the number of new cases abroad is higher than ever, with a record high of 166,000 reported in a single day on Wednesday, the Times database reports.

China, the original epicenter of the virus, recently imposed new travel restrictions on nearly half a million residents near Beijing to try and contain a new outbreak in the area, according to CTV News.

After months of no new cases in the area, 21 cases of the virus were reported on Thursday.

Brazil, South America’s largest country, has surged as the country with the second-highest number cases and deaths globally, second only to the U.S.